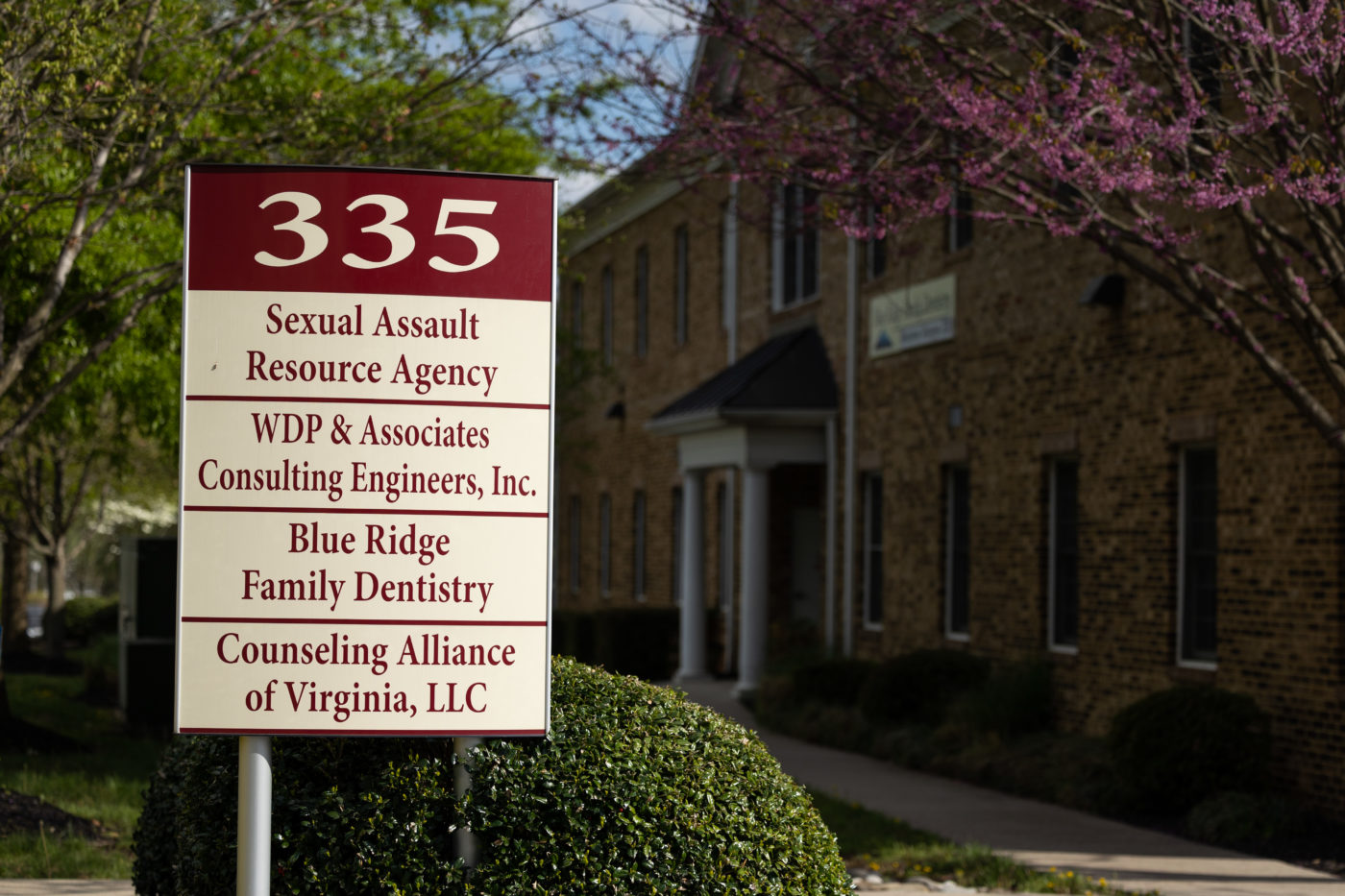 The Sexual Assault Resource Agency is located in Albemarle County.

The COVID–19 pandemic has crippled many initiatives nationwide, including sexual assault prevention programs. However, Charlottesville organizers are still finding ways to center discussions on sexual assault awareness and prevention.

Sexual Assault Awareness Month, observed in April, is a national campaign initiated by the National Sexual Violence Resource Center that seeks to educate communities about sexual violence. The campaign, started in 2001, shifted from awareness to the inclusion of prevention in 2009. Local organizations, such as SARA and The University of Virginia’s Take Back the Night, observe Sexual Assault Awareness Month with a number of initiatives and events.

The University of Virginia is an anchor to the city of Charlottesville with approximately 17,000 undergraduate students each year. Universities are no stranger to sexual assault scandals, and UVA is no exception.

In November 2014, Rolling Stone magazine published “A Rape on Campus: A Brutal Assault and Struggle for Justice at UVA.” The article rocked the nation in its attempt to profile sexual assault allegations at the university.  Although the publication retracted the article, its effects, both positive and negative, have been far reaching. The article proved to be a catalyst in the discussion on how college campuses address sexual assault. Contrarily, the article gave credence to the questioning of the validity of victims.

According to the 2019 Report on the AAU [Association of American Universities] Campus Climate Survey on Sexual Assault and Misconduct, 72% of UVA students believe that campus officials would take the reporting of sexual assault or other misconduct seriously. However, in the same study, approximately 33% of undergraduates report prevalence of nonconsensual sexual contact by physical force or inability to consent. In the university’s 2020 Annual Fire Safety & Security Report, there were 28 rapes reported in 2018 and 13 reported in 2019.

In April 2020, UVA sexual assault survivors petitioned the university with a list of demands that included “immediate, structural, and transformative change of the University of Virginia’s policies and resource allocation for sexual violence, sexual harassment, and intimate-partner violence prevention and support services.”

Last June, an anonymous Twitter account titled @ExposedUva began publicly sharing accusations of alleged sexual assault incidents on Grounds. Many of the tweets identify the names and class year of the alleged perpetrators. Although inactive, the account is still on the site.

In February, a young woman alleged that multiple males in a UVA residence hall assaulted her. There are not many public details of the account.

Take Back the Night UVA

Take Back the Night UVA Co-Chair, Kiera Goddu, in her fourth year at UVA, is preparing to attend law school next fall. As she organizes events for Sexual Assault Awareness Month, she shares her reflections on what she hopes to leave behind.

“I would love for Take Back the Night to be able to build out once again into a full-year situation, with either events in the fall or fundraising in the fall, and also take on more of those advocacy roles.”

Take Back the Night UVA kicked off the month with its annual vigil on April 10. Other events include a virtual dinner to discuss how sexual assault affects communities of color on April 19, LGBTQIA queer art picnic and panel on April 22 and a culminating Day of Healing event on April 24.

When asked if UVA has demonstrated its commitment to sexual assault awareness and prevention, and if there has been any action taken to address the list of demands presented to the university by the survivors, Goddu responded, “There have been staffing changes across the board. There are now three people working in sexual violence prevention, healthy relationship promotion and student health. One specifically working with engaging men and masculine people.”

The university approved these staffing changes during a hiring freeze, demonstrating the importance the school places on the roles. “Part of the Title IX issue is that it is a federal law issue.” Goddu continued, “As much as I would like to say that UVA has failed in other capacities where their hands aren’t tied, there are also big elements of this where their hands are tied.”

Goddu also shares that although the pandemic has proven difficult, the 50-member organization is still active and dedicated to spreading awareness and prevention. “There was a lot of adjustment from student organizations but especially student organizations like Take Back the Night that thrive on person-to-person interaction. Especially some of those events about healing, about community and solidarity that the emotion of those experiences don’t translate well onto Zoom.”

When asked on ways students and the community at large can prevent sexual assault throughout the year, Goddu shared, “If you see something that doesn’t make you feel comfortable, knowing that you can be an active bystander. Which is something that we promote here and a program that has been very successful.”

Sexual assault awareness is not limited to the university as local nonprofit SARA, a UVA partner, provides resources locally. The Sexual Assault Resource Agency’s mission is to eliminate sexual violence in the community. SARA’s annual fundraiser, Walk for SARA, kicked off this month and ends April 30.

Community Outreach Director Sheri Owen is passionate about the work the organization accomplishes within the community and the partnership with the university.

Owen emphasized, “One of the things that SARA does, which I think is such a blessing and a benefit for the community, is that if there’s a sexual assault, we’re on call 24 hours day. We respond no matter what time it is, no matter where it is in our service area to either the health center or the hospital with the survivor.”

SARA receives all assault-related calls. Although the number of sexual assault calls have declined, domestic violence calls have increased.

“That is for a lot of reasons,” Owen explains, “when you’re sheltered in place and when you’re in close proximity with people, you’re not free to call or get on the computer if you need to. And so, as things are opening back up and are getting less restrictive, I feel like we’re going to get more calls on our hotline and probably see more calls from survivors.”

Owen shares that the biggest myth she has encountered is that perpetrators are usually strangers. She also encounters ill-informed opinions on behaviors, appearances and clothing that influence how survivors are viewed.

“A lot of women don’t report because they don’t feel comfortable reporting, they don’t think people are going to believe them. Maybe they feel like the clothes they wore contributed to the attack somehow. That should not matter at all,” Owen shared in frustration, “So victim blaming just infuriates me.”

SARA’s prevention team has also developed a restaurant coalition that provides restaurant employees with bystander intervention training that helps bartenders and servers identify inappropriate behaviors. SARA has also collaborated with local breweries and while many in the community may question with the joint effort, Owen explains that it is for good reason. “We’re doing it because alcohol doesn’t cause sexual assault and we’re trying to talk about being responsible.”

Although she has been with SARA for six years, Owen has nearly 20 years of advocacy work under her belt.

Owen began her career in student affairs at Old Dominion University, where, in addition to overseeing the residence halls, she was on call for campus emergencies. During this time, she received calls that ranged from petty crimes to violent assaults. Recognizing a need for defensive training, she became the cofounder to the largest women’s self-defense organization in the country. For 10 years, she traveled across the US to instruct police on how to empower women with self-defense training. The courses, now known as Rape Aggression Defense Systems, are in 28 states and available to everyone.

When asked how we as a community can have sensitive conversations around sexual assault Owen offered, “Be mindful. If you’ve got 15 women in the room and you’re thinking 1 in 4, then you know at least three of them have been [sexually assaulted].”