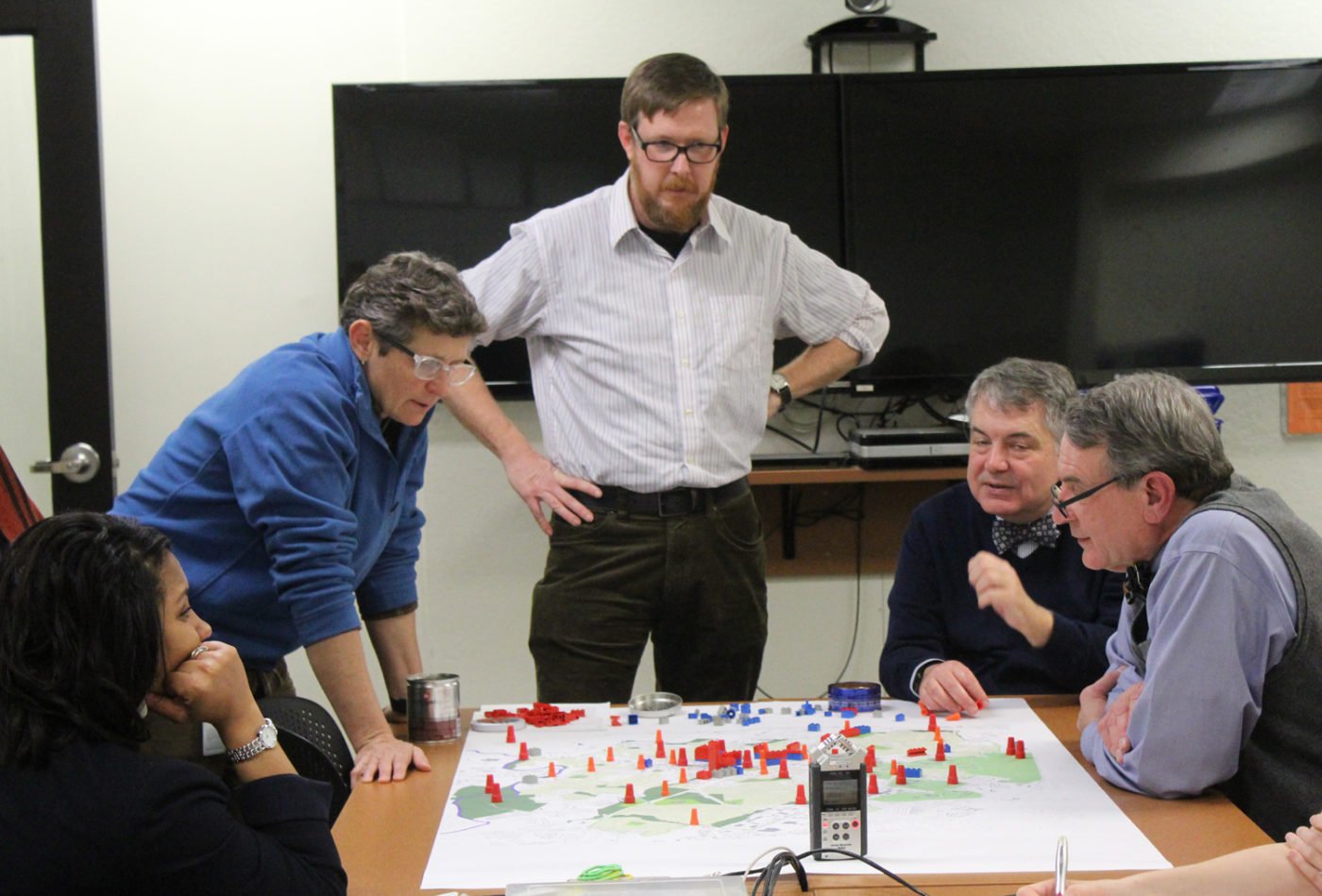 Commissioners review map of the Charlottesville in planning exercise

As more people choose to live in Charlottesville and more companies launch or expand, officials are reviewing the city’s rules and regulations to try to make sure that development’s impact on existing residents can be mitigated.

“Development is going to happen one way or another,” said Planning Commissioner Genevieve Keller at a recent work session. “How do we direct it where we want it to go and achieve what we want it to achieve?”

One of the first places to look for answers to that and other Charlottesville land-use questions is the city’s Comprehensive Plan. Virginia law requires all localities to create and maintain a guide “for the physical development for the territory under its jurisdiction.”

Charlottesville last adopted a plan update in 2013 and the city planning commission has now begun an update process to comply with state code.

The first chapter of the 2013 plan has a goal which calls for the city to “enhance the sense of place throughout Charlottesville.”

Since adoption in August 2013, the city has invested in numerous planning activities to help fulfil that goal, many of which are still on-going.

The firm Cunningham & Quill was paid $195,000 to create a small-area plan for 330 acres south of the Downtown Mall. While the 271-page Strategic Investment Area was appended to the Comprehensive Plan in February 2014, the city is still working out implementation details.

Council agreed late last year to spend up to $228,000 to hire a consultant to rewrite the zoning for a section of the SIA area to adopt an approach known as form-based code.

Rhodeside & Harwell is on the second of four phases to develop construction documents for a $30 million streetscape for West Main Street. When the second phase is concluded, the company will be paid $1.37 million for their work. There is no estimate for how much the third and fourth phases will cost the city but the construction documents are scheduled to be completed by the spring of 2018.

Meanwhile, some are concerned that development activity is happening faster than plans for better infrastructure are completed and implemented, particularly on West Main Street.

“None of us were thinking about housing thousands of students on West Main Street,” Keller said. “That may work out just fine but it wasn’t about anything we articulated in the Comprehensive Plan.”

This year the city must also decide whether to conduct a quick update of the Comprehensive Plan or if it should perform an extensive review.

At the same time as all of these initiatives, a review of the zoning code is also underway through a process now known as the Regulatory Framework Review.

To begin that work, the city planning commission met on Jan. 3 to start the Comprehensive Plan update. Members were asked to answer questions about the plan, such as why it should be updated and what is currently not working in the document.

Commissioner Jody Lahendro said much of the language in the plan is too general.

“I find too many of the goals to be without specifics and without enough information to measure progress, accountability,” Lahendro said. He read one goal from the “Public Space” section to illustrate.

“’Increase both passive and active recreational opportunities’,” he read.

“Where? Why? What should we be focusing on? No wonder we have a hard time measuring it. I’d like to do something realistic,” he said.

Others said the document is not aspirational enough.

“There are places that we want to hang onto and that we want to preserve and protect and keep them the way they are,” Keller said. “And there are other places where we do need to dream bigger. We haven’t dared to dream. We let a few people dream for us.”

When the conversation turned to what is wrong with the Comprehensive Plan, commissioners said they are concerned the document doesn’t match the city’s zoning.

“I’d like to see more ‘why’ and ‘how’ in the plan,” Keller said, adding the last plan lacks details.

Commissioner Lisa Green said she thought the city should focus on fixing zoning concerns first before making major changes to the comp plan.

“I think all we’ve done since I got on the commission is battle developers trying to get ahead of the curve of what we’re trying to accomplish,” Green said. “I don’t know what the reason to update [the plan] is because I don’t think we’ve had an opportunity to put it into play.”

Keller said the plan and the zoning map should both highly emphasize the presence of the University of Virginia, which she said would continue to grow and change.

“We should be trying to find opportunities for the people who teach and are on staff to reclaim those neighborhoods and live there again rather than driving 20 miles into the country to live,” she said. “I really think we will miss an opportunity in this plan if we don’t say how we attract the employees of our major employer to live near it.”

Much of the city’s current planning efforts stem from a study conducted in 2000 by the firm Torti Gallas and Partners which looked at and identified the city’s major corridors as areas where the city could grow in order to diversify and expand its property tax base.

The study helped inform the 2001 Comprehensive Plan update which in turn led to a comprehensive rezoning in 2003 which increased the potential size of buildings across the city.

However, since then many have become concerned that the increased building heights in 2003 have led to many conflicts between areas of low and high density, particularly along growth corridors such as West Main Street.

The current review of both the zoning code and the Comprehensive Plan is intended to address some of these concerns.

“We have to come up with … an updated ordinance, particularly for what we call the mixed-use corridor districts,” said Lisa Robertson, the deputy city-attorney and the city’s lead counsel on land-use issues.

She added there are some legal questions about some of the definitions in the existing ordinance.

“What’s a transition area?” she asked. “You can define that how you want but we don’t have a definition of it either in the comprehensive plan or in your zoning ordinance. If you don’t fix that, you’re going to continue to struggle [with conflicts].”

While new buildings have been under construction on West Main Street for many years, other corridors have not yet seen as much dramatic growth. That is changing on Fifth Street Extended, which is currently seeing construction of a dense residential complex at Cleveland Avenue now known as Beacon on 5th.

“I think we want to travel along Fifth Street Extended to get somewhere to go from Tonsler Park down to where the Food Lion is,” Keesecker said. “I don’t think that means we want all of 5th Street to be a wall-to-wall tunnel of six-story apartment buildings.”

Lahendro said he felt not all corridors needed to be overly dense or built-out.

“If we start having every other corridor having mixed-used on it and things get spread out like that, all of a sudden we’ll have a city with no center,” Lahendro said. “I can certainly see West Main Street connecting the university and downtown as being one of those mixed-use avenues. That makes sense to me. Some of these others, not so much.”

Keller said she has always had some concern over the city’s corridor-based approach.

“Now we almost have no other choice but to just fill them in, but is there a way we couldn’t?” Keller asked, pointing out that Rose Hill Drive and East High Street could be places that become more residential rather than mixed-use.

The city council will soon take up a special use permit request to allow additional density at 1011 East Jefferson Street, a property zoned for business that allows 21 units per acre by-right. The apartment complex would replace a doctor’s office.

“East High Street is feeling some pressure at this point I would assume from encroachment of redevelopment as downtown grows,” said Commissioner Kurt Keesecker.

Another conflict has occurred between commercial uses on Emmet Street and the residential neighborhoods such as the Rugby neighborhood. Council has recently approved a car-wash and a drive-in restaurant and Meadowbrook area residents are concerned about two new commercial centers on Barracks Road.

“I don’t mind dreaming and having that large dream but I want to know that I’m making some steps to it and that those are steps we can make five years and what we can do in those five years to get to that,” Lahendro said.

Robertson said the land use plan should be more specific about what’s acceptable in what locations.

“And then you can use some of your regulations such as how tall something can be in relation to what’s next to it, that becomes really important,” Robertson said. “We have to get the land use and the related text of the Comprehensive Plan to the point where nobody can ever justify anything within the comp plan.”

But a big question is who should do the work of reviewing the code.

“Does the city want to add 25 staff to NDS and plan every inch of the city and tell everybody what it ought to be or do we want to have a couple of planners be facilitators to work with neighborhoods to help put plans together themselves?” Keesecker asked.

The commission will continue their conversation in a four-hour retreat to be held Friday Jan. 13 at the Rotunda.