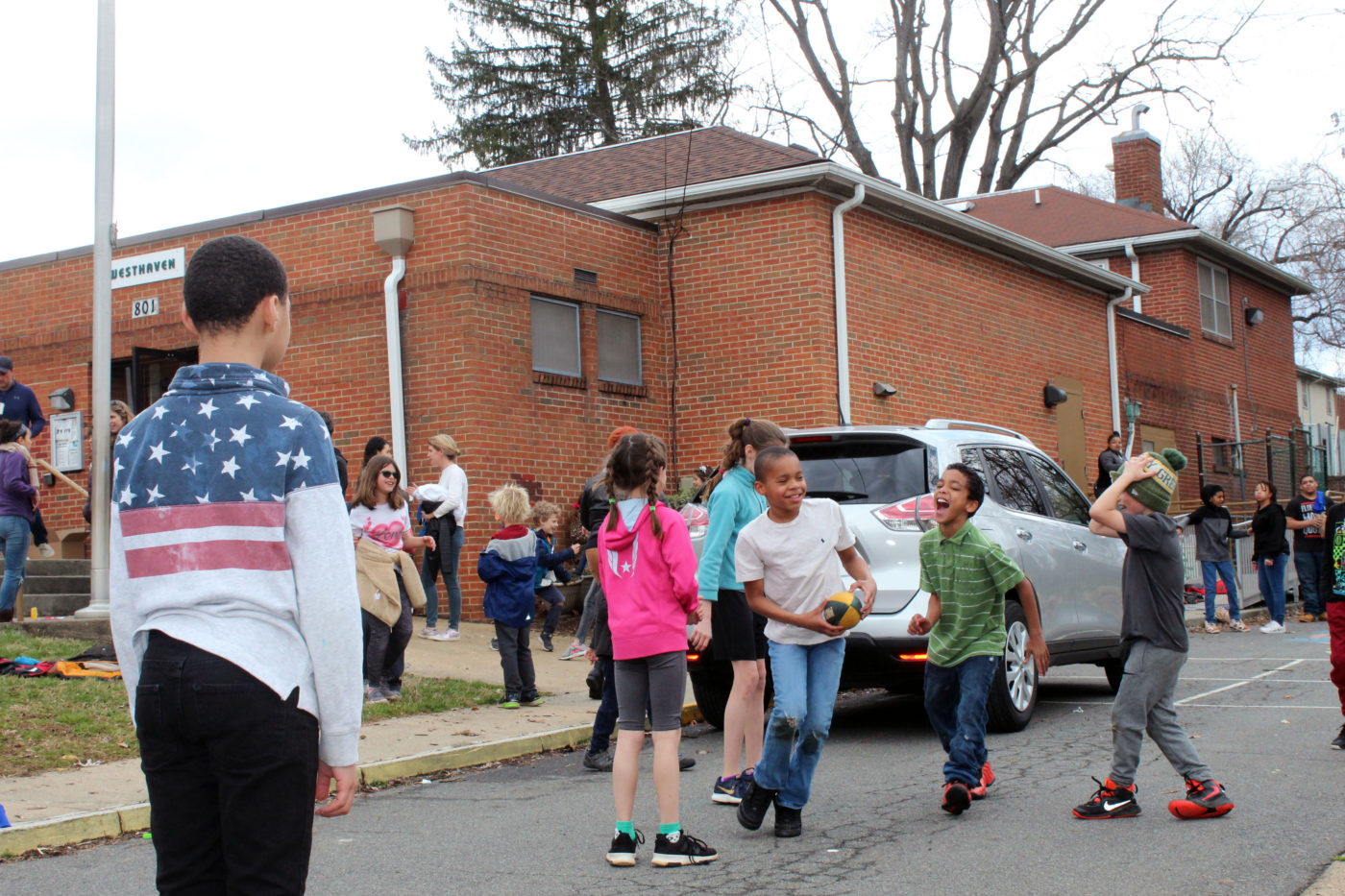 Students play games outside the community picnic and gathering at Westhaven Community Center amidst school closures due to an online threat.

With school closed due to an online threat, Charlottesville City Schools employees came together Friday morning to march through neighborhoods and provide lunch at Westhaven Recreation Center.

“It was kind of an organic thing. We didn’t have a plan past that, really,” said Charlottesville High School Principal Eric Irizarry. “We started to tweet things out and had more folks join us along the way. As we walked through our communities, we had kids and families join us. It was awesome.”

Irizarry said city school officials emailed each other Thursday night to organize the event. Irizarry also called Denise Johnson, program director at City of Promise, who informed him of a planned lunch orchestrated by City of Promise and Burnley-Moran Elementary School. A crowd of roughly 250 people passed through the community center between noon and 2 p.m.

“We know that any days out of school that are unexpected, we need to make sure that our kids are eating,” Johnson said.

“The amount of effort that it took to bring this together, City of Promise was fortunate and blessed enough to be at the helm of it, but it could not have happened without everyone else,” she said.

The efforts come as city schools were closed a second straight day due to a threat targeting black and Hispanic students at Charlottesville High School posted online on 4chan. A 17-year-old male from Albemarle County was arrested early Friday morning.

The juvenile was charged with threats to commit serious bodily harm to persons on school property, a Class 6 felony, as well as harassment by computer, a Class 1 misdemeanor.

Police Chief RaShall Brackney said more charges could come, and the teen could be tried as an adult.

After thanking the Charlottesville and Albemarle police departments, Virginia State Police and the FBI for their work on the case, Brackney said at a press conference Friday that hate, violence, and intolerance are not welcome.

“In Charlottesville and around the globe we stand firmly in stating there are not very fine people on both sides of this issue,” she said, referring to President Donald Trump’s 2017 comments on the white nationalist Unite the Right rally in 2017.

“Our School Board has stood strong during these past few days,” said Rosa Atkins, superintendent of Charlottesville schools, as she noted the volunteer efforts among school staff and City of Promise to organize meals and social gatherings to boost morale.

“I feel like I should be in school. I’m angry that there was a threat and that school was canceled,” said Lincoln Shaw, 9, a fifth-grade student at Burnley-Moran Elementary.

Having said that, he appreciated how communities made the most of the cancellations.

“I’m spending the day with friends instead of sitting at home the whole time, and it’s a nice day,” he said.

Irizarry noted that demonstrating support and love for the students was inspirational.

“We wanted to get out and let our kids know we’re here, we love them. It’s hard to sit home, and stay home when things are happening like this,” Irizarry said.

That sentiment resonated for many city officials and residents in the wake of recent white supremacist rallies and violence in Charlottesville.

“These past three years since Aug. 12 have been really tough for this city. I think it just shows that there’s still a lot of work to be done,” Irizarry said. “Unfortunately, I think Charlottesville is still a target for white supremacists since Aug. 12. It’s something that has become more familiar to us. Anytime like this happens in Charlottesville, the good thing is that our community rallies around itself. It’s making us stronger.”

“As for the nation, this is another example of where we are in this fight against injustice and hatred in our country,” Mayor Nikuyah Walker said. “I hope, as Chief Brackney stated, the world is aware that this will not be welcomed in Charlottesville, and that we wake up every day with the hope, purpose and the passion to make sure that we are leading this fight for justice globally.”