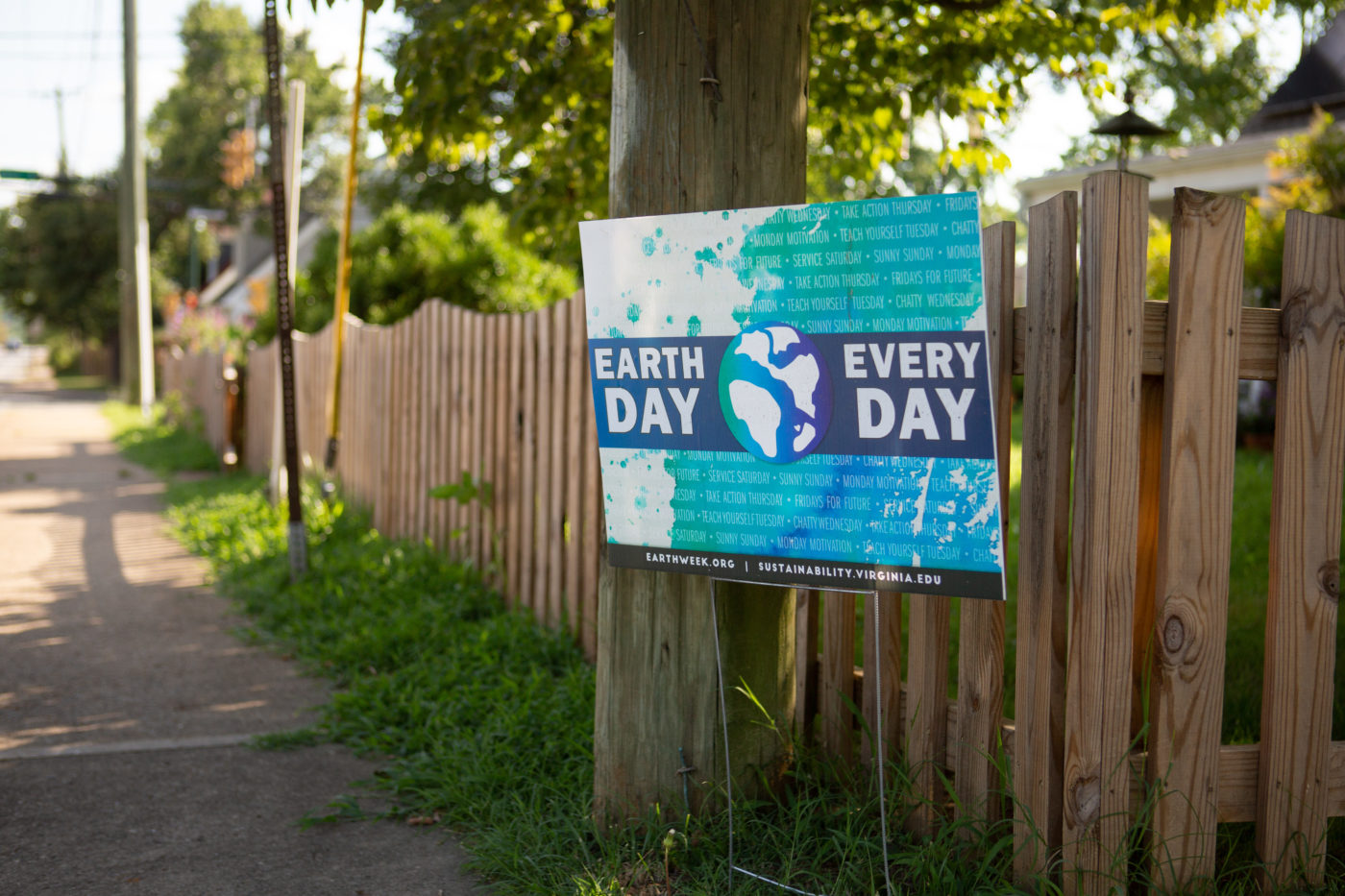 "No Pipeline" or "Earth Day" signs have been in yards of numerous Charlottesville-area residents.

The Atlantic Coast Pipeline project, which would have cut through land in adjacent counties, might be scrapped, but the city of Charlottesville still has its own gas utility. With environmental legislation passing the General Assembly this year, Virginia’s energy grid stands to get even greener. Meanwhile, the city’s local utility plans to explore ways to offset the carbon emissions involved in the use of natural gas.

“No pipeline” posters have been spotted in yards of Charlottesville residents for some time as years of legal battles have ensued. This week, the news that Dominion Energy and Duke Energy ceased their plans for the Atlantic Coast Pipeline signaled a win for climate resiliency among activists and opponents of the project. On a larger scale, it marked a step away from reliance on continued sourcing of fossil fuel.

“I think it’s an important victory for climate that we’re not going to lock in our reliance on natural gas for the next several decades,” said Community Climate Collaborative Executive Director Susan Kruse. “We can begin the work of transitioning our electrical system to a clean energy based system.”

The city of Charlottesville eventually may have to ask itself if it wants to continue to service residents with natural gas and how that fits in with its emissions goals. The passage of the Virginia Clean Economy Act sets the stage for increased buildout of renewable energy while requiring the gradual phaseout of natural gas plants. But Charlottesville’s gas isn’t produced here. It’s purchased and transported.

Charlottesville’s gas serves more than 20,000 customers in the city and Albemarle County’s urban ring. About 81% of residential homes in city limits have gas service.

A June report by the University of California, Berkeley, argues that the United States could reach 90% carbon-free electricity by 2035 without additional cost to customers or new fossil fuel plants. To achieve this, the nation would have to increase use, transmission buildout and energy storage of renewables while retiring coal plants and reducing natural gas use. Both Charlottesville’s and Albemarle’s governments have declared greenhouse gas emission reduction goals of 45% by 2030.

“A lot of people have framed it [natural gas] as the healthier and greener fossil fuel. It technically is, but there’s still a lot of bad stuff,” said Chris Meyer, executive director of Local Energy Alliance Program (LEAP), a nonprofit organization that works to retrofit homes in the area with energy efficient infrastructure — particularly low-income residents who are most affected by power bills.

Natural gas contributes to fewer carbon dioxide emissions than coal or oil, but its delivery method through pipelines, and construction of them, can pose dangers if they leak.  Additionally, natural gas also emits methane, a greenhouse gas.

In recent years, utilities like Dominion have been retiring their coal plants while investing in the use of natural gas.  Meanwhile, Virginia has gradually increased its use of renewable energy — an effort that is set to make further strides with the passing of the Virginia Clean Economy Act this year. With natural gas being a step away from other fossil fuels, Meyer said it has been used as an idea to “bridge” from coal while the energy grid gets greener.

“A lot of people are saying it’s time to get off that bridge,” Meyer said. “Just as all the coal plants are being retired, that’s what needs to happen in the next decade to natural gas plants.”

The fuel switch, he also noted, won’t happen overnight and would have to be carefully planned.

“Charlottesville residents are owners of miles of nat gas pipelines underneath our streets that deliver it to our houses and out into the county,” Meyer explained. “We cannot tomorrow just turn all those off. There needs to be a well thought out transition, especially one that considers equity and that helps low income people make that transition.”

Should the city begin to phase out its natural gas utility, LEAP could be helpful in aiding the transition for some residents by replacing appliances and installing HVAC units. Given that the primary emissions in the area stem from residential and commercial buildings, Meyer suggested that future construction take gas use into account.

“Natural gas isn’t all emissions, but part of it. Eventually to meet our climate action goals, we will need to ditch natural gas,” he said. “A first step is to just stop installing natural gas in new homes and businesses. It’s only going to increase the cost of moving away from this in the future.”

Meanwhile, state-level initiatives are poised to help the overall electrical grid evolve. Recently the Virginia Department of Mines, Minerals, and Energy teamed up with the governor’s office to host a series of webinars this summer to educate stakeholders and businesses on new legislation along with renewable energy, efficiency and storage.

“We have a team of experts in renewable energy, energy efficiency and energy storage that will be facilitating these webinars and have groups on board that are working directly toward meeting the goals of the Virginia Clean Economy Act.” said Tarah Kesterson, a public relations manager with DMME, in an email.

While the Virginia Clean Economy Act stands to help foster buildout and adoption of renewable energy and require utilities to phase out some natural gas, it doesn’t phase out everything.

“Natural gas that is not used to create electricity will not be affected,” Kesterson said. “So, if homes use natural gas as heat or for cooking — they will continue as is. The Virginia Clean Economy Act only requires utilities to phase out the use of natural gas in their electric generation facilities.”

Meanwhile, Virginia also is the latest state to join the Regional Greenhouse Gas Initiative (RGGI), a cap-and-trade program where states agree to a cap on carbon dioxide emissions. In joining RGGI, Virginia will be gradually reducing its carbon emissions from coal and natural gas power plants.

While Charlottesville’s local utility is not required to phase out its natural gas use, the utility does aim to participate in carbon offset programs, like investing in reforestation projects or carbon capture projects.

Earlier this year, its director, Lauren Hildebrand said that it would be exploring such programs, although with the pandemic, those plans were put on pause for a time.

Hildebrand said that when the pandemic hit, her department decided not to raise any rates for its utilities, which can impact offset options.

“It will cost a little more to buy offsets, but when we made that decision to not increase rates for this fiscal year, that decision has been postponed, but we are still evaluating how to incorporate it [carbon offset] into the way that we do business.”

In the meantime, the department has offered energy conservation rebates and collaborated with LEAP since July of last year to weatherize homes of low-income residents, thus lowering utility bills and emissions.

With the future of energy widely viewed to be best generated through renewables like wind and solar, Hildebrand said that the natural gas industry is working to adapt.

“The future of the natural gas industry is hard to predict, even for professionals who work in the industry every day,” Hildebrand said. “The industry is also looking into developing alternative fuels with lower emissions that can be transported through the pipeline system that would be available in the future.”