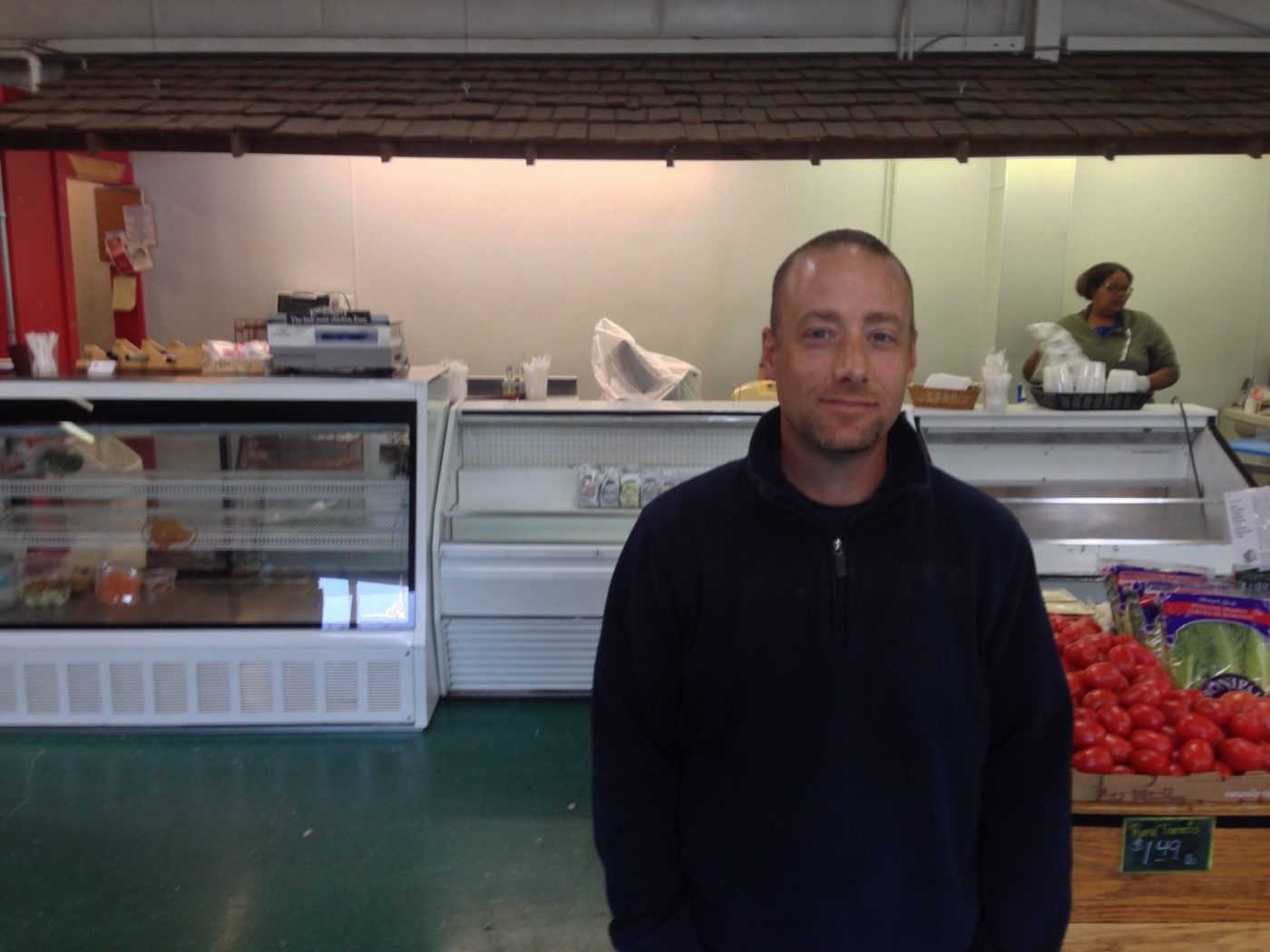 Spencer Morris on the last day at C'Ville Market

Anderson’s Carriage Food House on Barracks Road and C’Ville Market on Carlton Avenue both closed for the final time on Friday, with managers of each store citing tough competition as one reason for going out of business.

“There are big-box grocery stores everywhere in Central Virginia,” said Spencer Morris, store manager at C’Ville Market. “We don’t have the buying power that they have. Their distribution centers are buying pallets and pallets of products.”

A store that had been known as Kathy’s Produce became C’Ville Market in 2001, beginning a profitable era.

“Business was great back then,” Morris said. “Kathy’s Produce always had a nice following and so when we took over, we still had the same following. And you didn’t have as much competition in Charlottesville.”

Morris said the primary reason his market is closing is not having enough customers.

“Our sales have been trending down for the last five years,” Morris said. “It was nothing for us to have 800 customers on a Saturday. Now? We’d be lucky to have 350.”

Since then, Whole Foods Market has relocated from Albemarle County into the city of Charlottesville. Trader Joe’s recently opened in the Stonefield shopping center, and will be joined by a Costco next year. The Fresh Market also has opened in Albemarle Square shopping center.

Morris said another factor for the store’s demise is the improved ability of producers to sell directly to customers.

“Look at how many farmers markets are popping up all over the place,” Morris said. “If they can get produce up at the market at Forest Lakes or down the road from us at Meade Park, why are they going to come here?”

Anderson said his decision to close is due to a combination of the economy, landlord disputes and changes in his family dynamic.

“My parents have owned the business and were a big part of running it and have not been able to help me because of health issues,” he said.

Anderson’s family has been in the grocery business locally since 1929, and he has been in the industry since he was a boy. He said he has felt the pinch from competition from larger stores.

“The grocery stores are making it so you can get everything in one stop,” Anderson said. “We have to have a bigger selection, a fresher product and a better price.”

The owner of a gourmet food store on West Main Street said she and her family will miss the two stores.

“We feel for them and we’re sad to see them go,” said Kate Collier, founder of Feast. “We’ll miss the seafood counter at Anderson’s. It was fun to walk through the walk-in cooler at C’Ville Market.”

Feast opened its doors on West Main in 2002 and specializes in local and international artisan foods.

“Business has grown every year for 12 years, so our outlook is bright,” said Collier, who co-owns the shop with her husband, Eric Gertner.

Collier attributes much of the store’s success to its location in a part of Charlottesville that is becoming known as Midtown.

“When we opened, West Main and Midtown had lots of storefronts that were vacant and it was kind of an area in transition connecting the university to downtown,” Collier said.

Feast is surrounded by like-minded merchants in the Main Street Market, a building that contains eight local merchants in all.

Morris said he might still be in business if had more suitable neighbors.

“Everybody complements each other up there,” Morris said of Feast’s location. “Albemarle Baking Company, Feast, the butcher, the seafood place. Someone can go there and shop and get everything.”

That was the idea, according to Collier.

“The vision for this building was the European market hall-style of shopping, where you go to the expert fishmonger, the butcher, cheesemonger and so on,” Collier said.

Collier said she has concerns about the new Wegman’s slated to open in the Fifth Street Station development next year, but that she and her staff will continue to improve the way they do business. She said sales dipped when Whole Foods relocated to Hydraulic Road, but soon rebounded.

Collier said she will still continue to shop at Foods of All Nations on Ivy Road, as well as the Reid Super-Save Market. The latter recently completed a remodeling.

Smaller can be better

“We’ve been able to expand our products in dairy, meat and produce,” said Kim Miller, general manager of Reid’s.

The building in which the store operates has been a grocery store since 1942 but was eventually acquired by her family in 1962. In all, the family grocers had three locations in town but are down to the one remaining on Preston Avenue.

“We’re trying to do whatever we can to make it be a continuing business,” Miller said.

“We’re known for our meat department. A lot of your chain stores have gone to the pre-cut meat so we still cut here in the store.”

Miller said one of Reid’s advantages is its smallness.

“Sometimes, for some people, large is not always the best,” Miller said. “I think people are coming back to wanting a smaller local store.”

Anderson said he will continue his catering service and will move that equipment to storage for the time being. But he said this is a scary time for him.

“I’m 49 and I’m out there looking for another job for the first time in my life,” he said.