Charlottesville has a new mayor — but remember, the mayor’s not the one in charge here 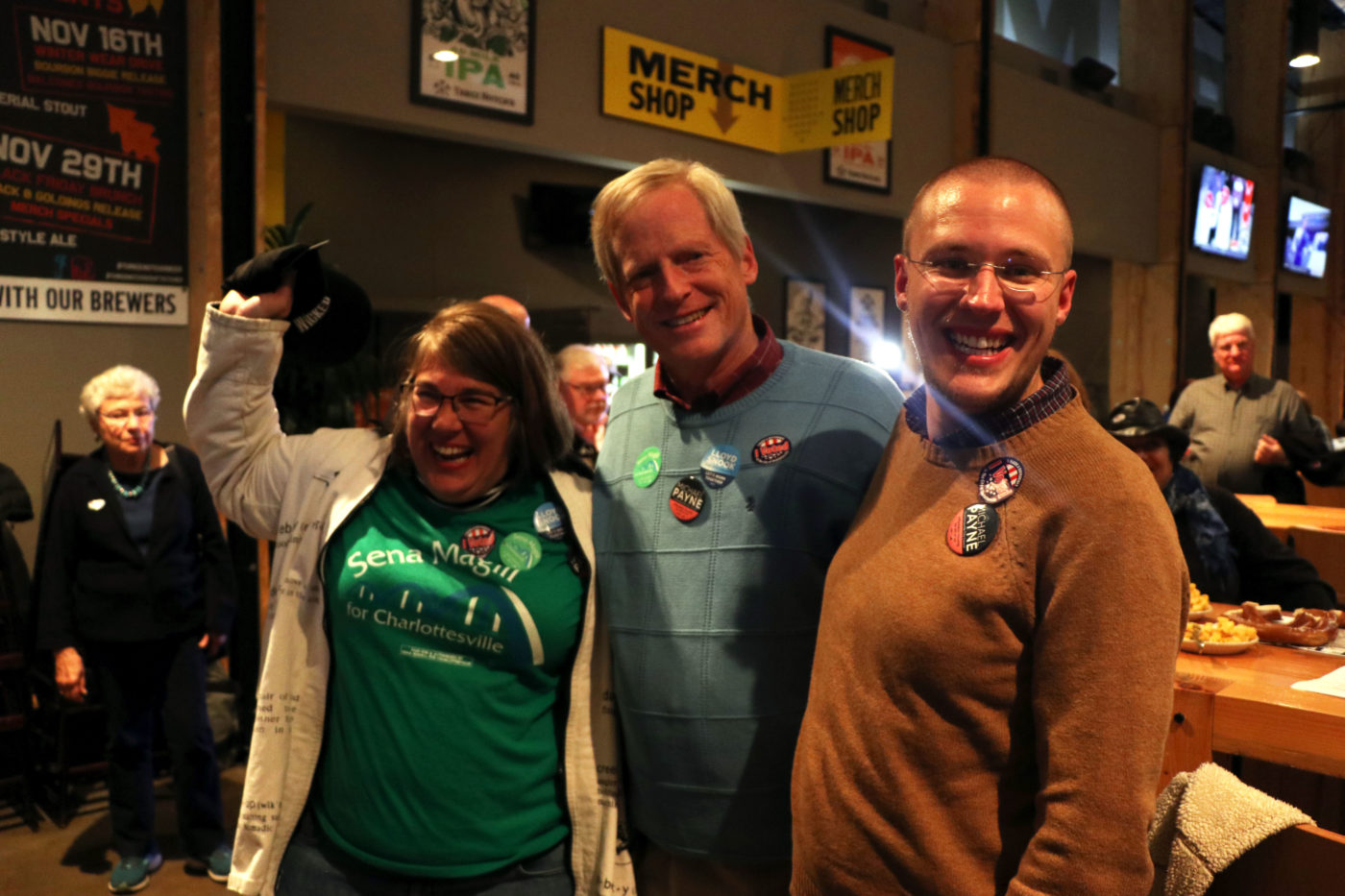 [From left to right] Sena Magill, Lloyd Snook and Michael Payne celebrate their election to council in 2019.

When Charlottesville resident Stephanie Roan thinks of the city’s mayor, she envisions them as the top city official with total government control.

It’s a reasonable assumption that many in Charlottesville share. But that’s not how it works here.

At the start of the year, Charlottesville selected its new mayor, Councilor Lloyd Snook.

Though he has taken up the role of mayor, the position is ceremonial. It’s the city manager — which Charlottesville is still lacking — who will execute Council’s future policy priorities because Charlottesville is one of many localities nationwide that has a “weak mayor.”

“I have to be clear that I do not have administrative power,” Snook explained in an interview with Charlottesville Tomorrow.

Neither did recent Mayor Nikuyah Walker or Mike Signer before her.

What is a weak mayor?

The National League of Cities differentiates between the types of mayors as “strong” and “weak.” The titles distinguish each mayor’s level of authority and responsibility, said James Brooks, a director with the league.

A strong mayor is one – like Levar Stoney in Richmond – who is elected separately from a council and is essentially boss of the city. A strong mayor executes the policies that the council passes and handles local government administration, like overseeing staff and crafting budgets.

“When you think of a mayor, typically you might conjure up the image of New York’s Rudy Guiliani or Ed Koch — big city mayors where they run the legislative end of things but also have administrative obligations,” Snook said. “That’s the picture people have, but not the way it works under this form.”

A weak mayor is a member of the city council that is selected by other members of council to serve in the ceremonial role. They are a chairperson that runs council meetings, and they can also be the most visible member of the legislative body to the public.

Councilor Michael Payne explained that both Council and the mayor have little direct power.

“We’re more like the board of a company or non-profit,” Payne said. “We set the policy direction but rely on the city manager — who is similar to an Executive Director or CEO of other organizations — to accomplish our goals.”

The distinctions can be confusing for people unfamiliar with how differently local governments can function. Charlottesville constituent Roan, for example, said that the term “mayor” brings to mind someone with “local control in decision making.” As such, she assumed mayors have more control over the city and would be less approachable.

And Roan isn’t totally wrong in that respect. While city managers do carry out day to day operations of city management, they are technically hired by City Council. Managers answer to Council, and Council and the mayor answer to constituents.

A city manager is more of a “behind the scenes” operator, said Brooks, with the National League of Cities. Their often apolitical appearance can be advantageous, he added.

“I like to tell people that if you go to a local government website and look for a picture of the city manager, you won’t find one. You might get their name and the number to their office,” Brooks said.  “It can be a good thing or a bad thing that [city managers] are isolated from politics.”

Still, he is a proponent of having city managers.

Councilor Sena Magill is also in favor of the council-manager form of government. She said she likes that city managers execute the work of Council and, to do that job well, must listen to all members. Additionally, city managers can serve longer than an elected strong mayor might.

“It takes a few years to really start understanding this job for most people,” Magill said. “Many people here do not run for more than one term, or if they do it is only two terms. This would mean even less consistency and less chance to bring about change.”

Councilor Payne noted that with a strong mayor there could be “unpredictability and policy swings between elections” while also drawing a “clearer link between the outcome of an election and the policy direction of the city.”

What’s more, city managers are often not from the communities they serve, said Stephen Farnsworth, a professor of political science at University of Mary Washington.

“That detachment can allow for professionalism that serves the long term interest of a community,” he said.

“What you can get with elected officials in more power is a very deep understanding of the community and heightened responsiveness to constituents,” Farnsworth said. “Each system has its opportunity for frustration.”

For cities that have chosen to have a city Council-Manager style of government, the appeal is that the city’s executive position is someone who is trained in governance.

According to the National League of Cities, it’s the most common form of local government. Larger cities, like New York or Chicago, tend to have the strong mayors.

The council-manager style of government originated in 1908 in the nearby city of Staunton, Virginia and went on to be utilized by thousands of local governments across the country.

“It provided a way to have elected city officials who would set the overall policies but then you have a more permanent bureaucracy whose job is to implement those practices,” Snook said.

“Most city managers are educated in the field of public administration,” Brooks said. “They might also bring to the table skills as planners. They might even be highly specialized wastewater treatment people — those are certified jobs where you have to acquire special licensure to do them. And most city managers have been an assistant city manager somewhere else.”

Meanwhile a mayor — be it strong or weak — may or may not have obtained degrees or licenses in public policy or government specialties. They are, however, more likely to have trust from the community who elect them, rather than a council that hires them, Brooks explained.

“We are very likely to stay a city-manager form of government for the foreseeable future regardless of the pros and cons of each system,” Payne said, noting that localities in Virginia would need General Assembly approval should they wish to adjust their charters.

That doesn’t mean the system is currently working flawlessly.

Payne said that amid the turnover in city managers, Council has not “done an adequate job” of articulating unified policy goals to the people serving in the position.

Council and the next manager will need to work on a strategic plan to guide policy priorities and overall vision in the months and years ahead, he said.

“That’s really the critical thing that we’ve lacked,” Payne said. “And because that involves strategic policy decisions that will take months — in some cases years — to implement, stability in the city manager position is important to developing and executing it.”