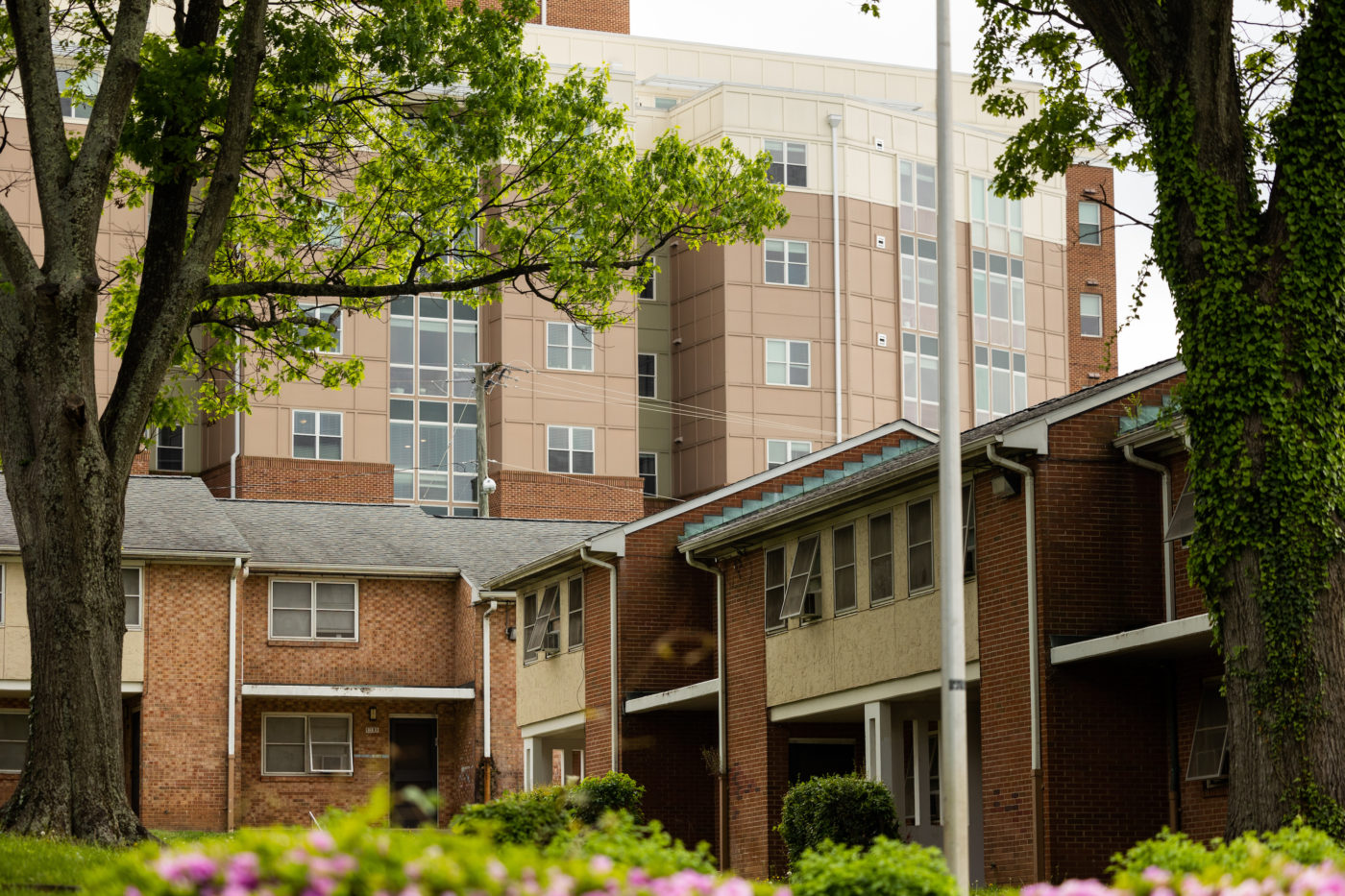 The Charlottesville Low-Income Housing Coalition has released a report, “Why Building More Market-Rate Housing Will Not Solve Charlottesville’s Housing Crisis,” that explains the very thing the report title said it will while also suggesting solutions.

Over the course of 21 pages (including two pages of sources), the report, which was released Thursday, uses a variety of information to succinctly make its case from charts, graphs and statistics culled from national reports to evidence of local housing and development trends to studies on what has and has not worked in other cities to first-hand accounts of the lived experience of low-income Charlottesville residents.

The report’s primary author, Virginia Commonwealth University social work graduate student Maddy Green (who is also an incoming Charlottesville Redevelopment and Housing Authority commissioner), said that CLIHC partners started thinking about this report in January, when the Belmont Heights proposal came before the Planning Commission and City Council. They’ve continued thinking about it as Rhodeside and Harwell Inc., the consulting firm receiving nearly $1 million to advise the city on updating the housing plan and rewriting the zoning code, have presented drafts of the land use plan to city officials.

“As advocates for deeply affordable housing on this particular site we were very concerned about lack of commitment to providing affordable housing, especially because this particular landlord had recently displaced several extremely vulnerable residents,” Green writes in an email. “Some public officials argued that we should give a special use permit because it’s important to build any housing, no matter how high the rent will be or how quickly any affordability agreements expire. We realized we wanted more understanding of the economic argument of ‘trickle-down housing,’ because of the massive displacement happening to Black people across the city. After that debate, we wanted to write a report addressing the issue head-on.”

“The local Planning Commission, City Council and City staff get a lot of project proposals across their desks, since Charlottesville is really growing,” Green continued, adding that “the loudest voices in the debate are often developers who have a lot of profits to gain from denser rezoning and allowing market-rate development without requiring them to integrate deeply affordable housing.

“We wanted to add the voice of the local residents, along with historical context, and recent research evidence to help inform both the public conversation and decision makers on what these market-rate developments are doing to our community and our cost of living.”

Though Green is credited as the primary author of the document, she worked closely on the report with Emily Dreyfus, community organizer for the Legal Aid Justice Center; a number of local researchers — Laura Goldblatt, Samira Nematollahi, Cassie Powell and Jordy Yager; LAJC staff; and the nonprofit consulting firm HDAdvisors. Residents of the Belmont, Fifeville, Prospect Avenue, Ridge Street, Rose Hill and 10th and Page neighborhoods added their voices via a survey initially done for CLIHC’s “The Impact of Racism on Affordable Housing in Charlottesville” report released in 2020.

Conversations about the housing crisis can be overwhelming and discouraging. It becomes clear, quickly, that the problem is not only complex, but deeply systemic, and it’ll take a lot of people and organizations and governments working in tandem to arrive at an equitable solution. Reports like this one, which give chewable, digestible bites of information, can help wrap more people into that conversation both as speakers (hence the inclusion of resident quotes) and listeners as a means of advocating for equitable housing policies.

The new report is broken down into seven main sections: An introduction, “The State of Housing,” “How Charlottesville Housing Became Unaffordable,” “Impacts of Unaffordable Housing,” “Debunking Policies that will Perpetuate Inequality and Displacement” (the longest, most involved section), “Solutions” and a conclusion.

The report is fairly short and covers a lot of ground. At various points, it clarifies terms and concepts that are often conflated in casual and even high-stakes conversations on housing, such as the difference between “low-income” and “extremely low-income” households. (And how high “low-income” incomes really are according to this federally-determined measure.) It succinctly examines the relationship between race and wages, wages and housing, and thus race and housing, each point building on the one before it.

There’s a history lesson, too, on how the city’s affordable housing crisis is generations in the making and a result of intentionally racist and exclusionary policies. The report also points out flaws in current policies, such as the one in the city’s affordable housing ordinance that mandates just a 30-year affordability term, which, the report suggests, does not guarantee generational housing stability.

The report reaches its crescendo when it makes its case against blanket up-zoning (i.e., zoning for increased residential density all throughout the city). “Charlottesville’s neighborhoods with comparatively lower current land prices will be more attractive to investors looking to develop. By definition, these are the very neighborhoods where people are already being displaced. Blanket up-zoning will encourage development in primarily historically Black neighborhoods, thereby worsening racial inequities. Majority-Black neighborhoods need a different approach: zoning which will slow the tide of displacement.” It’s easy to visualize where that displacement is already happening. 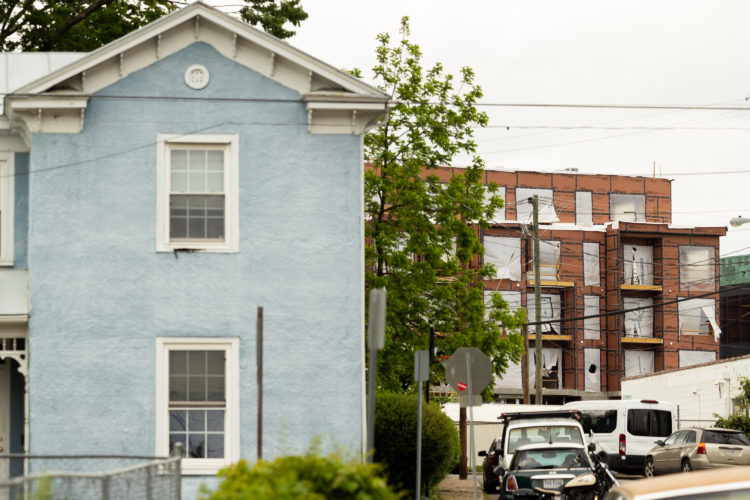 Advocates for truly affordable and low-income housing fear that housing such as the Dairy and 10th apartments (right, part of the Dairy Central complex) will contribute to a massive displacement of residents in historically Black and historically low-income neighborhoods like 10th and Page (pictured here).

Including potential solutions that’ve worked in other localities was particularly important to the report’s authors and editors, said Green.

“We’re trying to point out workable solutions, because Charlottesville ought to support home for people not profits,” Green said.

The report concludes with what the Charlottesville community at large stands to lose if it does not adequately address the housing crisis in a real way: Massive displacement and loss of racial, economic and cultural diversity.

Elaine Poon, one of the Legal Aid Justice Center lawyers who worked on the report, hopes that this information, either via vocal activists or by individual initiative, will reach the consultants who work with the Planning Commission, who work with the decision-makers on the City Council and help move Charlottesville toward a more equitable land-use map.

“If there’s something that comes out of the horrible ‘Summer of Hate,’” perhaps it’s housing equity, said Poon, and housing equity done right. It was something “a lot of activists saw as a potential way of addressing racial inequity in this city. It started then, but now is the time to prove that they meant it.”

Poon hopes that when considering the land use map and all of the zoning policies that go into that, people consider the actual lived experience of people in the community, not just the data, though the report uses both purposefully.

“Who bears the burden of a change in quality of life?” she asked. “Descendants of Vinegar Hill, some of them live in Westhaven, so, you’re asking them, again, to bear the burden of whatever is ailing the city. Or, frankly, what the city has created.”

Sunshine Mathon, CEO of affordable housing solutions-focused nonprofit Piedmont Housing Alliance, said that the report can lead to a much better understanding of the local (and national) housing crisis, and really it’s just one piece of the pie. He’s hopeful that this report will lead to conversations and actions that bring our community another step closer to discussing what he views as another essential component to true housing affordability (and thus housing equity): housing vouchers.

“You can’t build your way out of the problem,” just as the report suggests, said Mathon. “The building process, even though it is subsidized on the affordable housing side, and provides long-term affordability, it is still entrenched within the larger housing market, which has racist underpinnings. So you can’t build your way out of it because the larger system commodifies housing as an asset, not as a human right and a home. That distinction means that we will always be fighting upriver, unless other systems change as well, and that’s what the housing voucher system could do: Housing is a right. Choose where you want to live. You have to have other solution sets at the table at the same time. You have to build, and you have to build as deeply affordable as you can. You also need to be increasing economic opportunity, increasing wages, etc., so that people can start affording more of those closer to market rate rents. And then another key piece is the housing voucher part,” and that’s something that has to happen on a federal level.

With a full land use plan due to city officials in June, to be followed by a rezoning, now is the time for people to speak up for housing equity, said Poon.

“On social media, I’m starting to see people react to the new housing plan from the consultants, and I just hope that peoples’ memory and commitment to racial equity in this city is still alive. I think the fangs come out when your neighborhood might change. I hope that people understand what they’re asking for when they want to stand in the way of progress, and what they’re asking for is a continuation of racist policies,” Poon said.