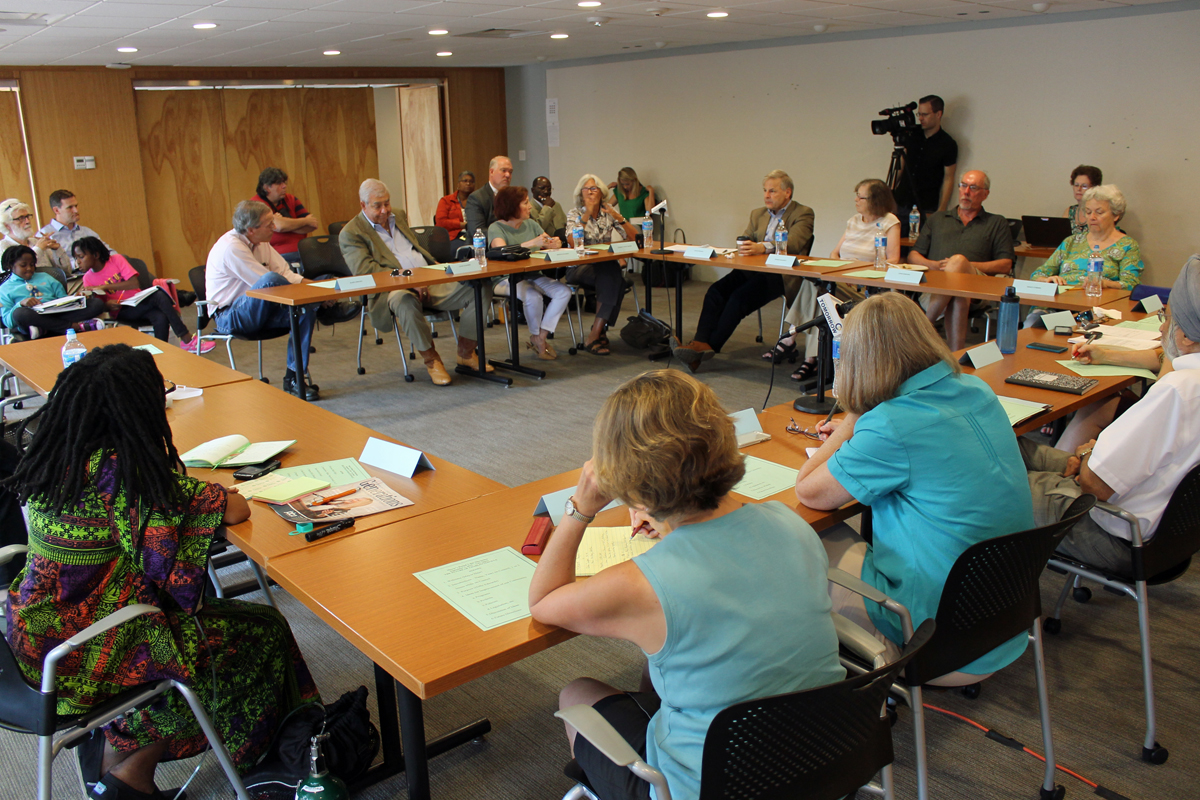 A group with dozens of years of collective experience on the City Council gathered last week with current councilors to both reminisce and offer advice on how to steer Charlottesville’s future.

“Maybe this group can soften the kind of blows that occur when people feel like they’re being left out of the conversation,” said Holly Edwards, who served on the council from 2008 to 2011.

Edwards wants to create an informal coalition of former elected officials who can offer wisdom and direction not only to the city’s leaders but the community at large.

“I didn’t want a group that would have to weigh in on controversial issues,” Edwards said. “It’s just meaningful citizen engagement from a perspective that a lot of people will never have, but we were blessed with that opportunity.”

The idea got a trial run at a special council work session Thursday to which all former mayors and vice mayors were invited by current Mayor Satyendra Huja.

“Charlottesville is a great community but it can do better,” Huja said.

Each member of the panel was asked to describe one or two of the big issues that faced their council.

“Crack cocaine really came from out of nowhere and overwhelmed a lot of our neighborhoods and communities and we really struggled with that one,” said Elizabeth “Bitsy” Waters, served on the council from 1988 to 1992.

“The [Downtown] Mall was obviously here, but we moved to bring the Discovery Museum downtown and built the Water Street parking garage,” she said.

Nancy O’Brien, who served on the council from 1976 to 1980, said, “Vinegar Hill was empty except for the Commonwealth Building at the bottom and the entire Garrett Square area was empty, as well. The housing authority was unable to deal with that so we took it over and that became the kind of development that occurred.”

John Conover, who served from 1980 to 1984, said, “The main issue at the time is that we were attempting to annex in Albemarle County and that morphed into revenue-sharing.”

Blake Caravati was on the council when the decision was made in 2003 to rezone West Main Street to allow for the possibility of nine-story buildings.

“The city was changing and it was starting to take off,” Caravati said. “It’s really taking off now.”

Caravati said one major issue then and now is affordable housing.

“I don’t know if we were effective in addressing it, really, and we’re suffering for that lack of effectiveness as a result, and hopefully this or future councils will be able to do better at it,” he said.

Edwards asked the former mayors and vice mayors to suggest ways they would like to see the city change.

“It may not necessarily have to have government involvement,” Edwards said. “In some cases, it may be more appropriate that it doesn’t.”

Virginia Daugherty, who served from 1992 to 2000, said she wants the city to find preschool opportunities for all children.

“There should not be any children in our community who cannot go to preschool,” Daugherty said. “If we are not serving those children, we are not leaving a good legacy.”

O’Brien said there is a lack of “organizational clarity” in the department of neighborhood development services.

Waters said the council needs to make decisions in a timely manner.

“Issues last a long time,” she said. “A Belmont Bridge decision was made and it’s drifted away, and we’re maybe moving into our third year on code and design standard changes.”

“You listen to everybody, you think your best, you do the best you can and then you call it,” Waters said. “You hope you’ve made the right decision and if not, you can not be voted for the next time.”

However, the current mayor said that is easier said than done.

“It takes three to make a decision,” Huja said. “Sometimes it’s hard to reach that three.”

Edwards said she thinks the city needs to “reach beyond” to redevelop public housing. No action has been taken since the Charlottesville Redevelopment and Housing Authority adopted a master plan in July 2010.

“Why is that always being put off?” Edwards asked. “What is it this group can do to champion and move it forward?

Meredith Richards, who served from 1996 to 2004, suggested councilors spend more time talking to each other if they are having differences.

“There’s nothing like talking it out in a good conversation and whether you agree with each other or not, it’s one way to help come to terms with what you do agree on and it’s a good way to make peace,” Richards said.

The group is expected to meet again sometime early next year.