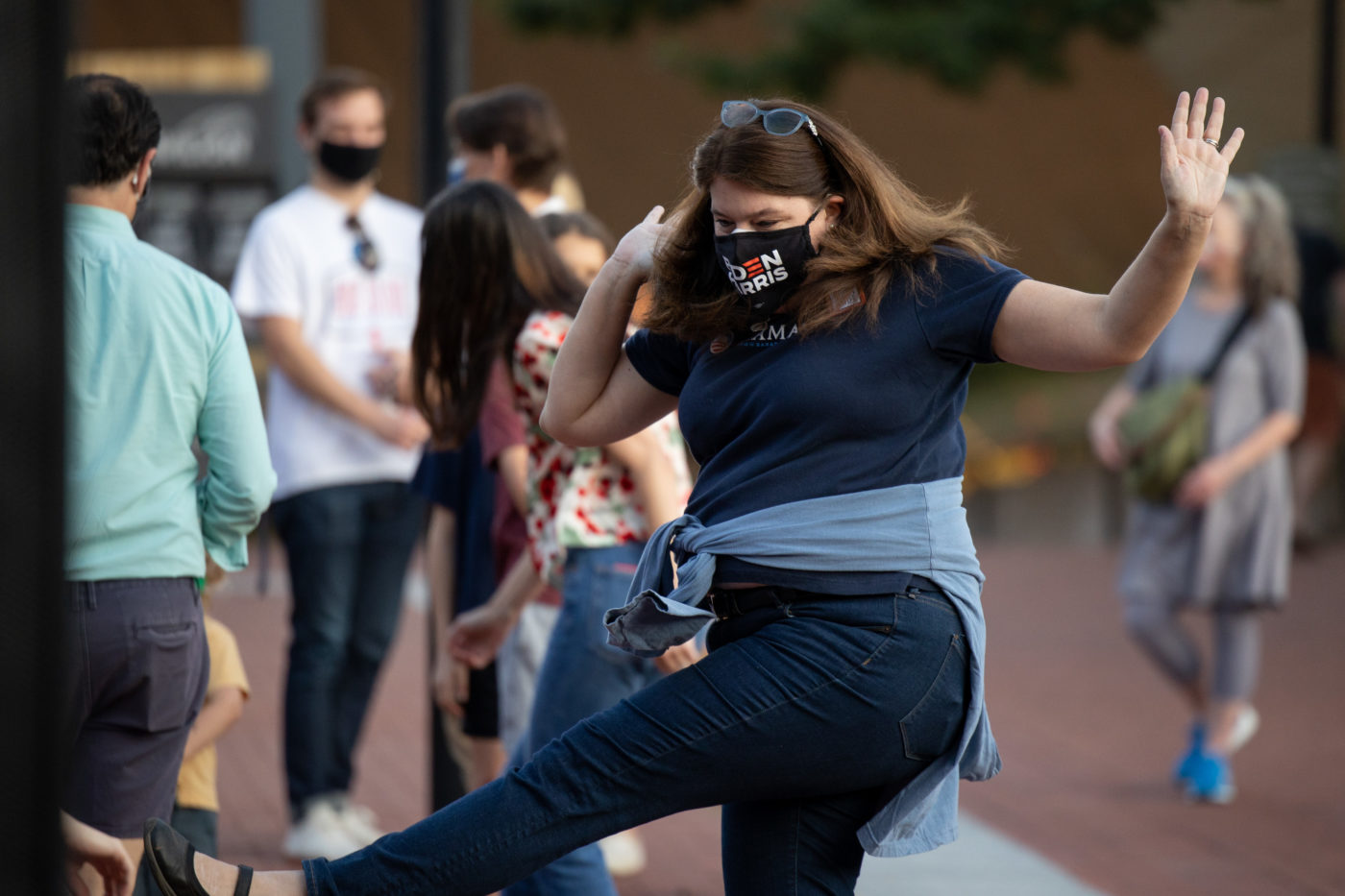 A woman dances to music played at an impromptu celebration on the Charlottesville Downtown Mall on Saturday in honor of Joe Biden, a democrat, defeating President Donald Trump, a republican, in the 2020 presidential election.

Late Saturday morning, a man burst out of a store on the Charlottesville Downtown Mall and cried — “Biden won Pennsylvania!”

There was a moment of silence as everyone looked frantically at their phones. Then, all down the mall, people began to cheer.

“It was so surreal,” said Shelley Davis, who is visiting Charlottesville with her husband Jamar for their anniversary weekend. “It was like being in a movie. Everyone started shouting and clapping.”

As Gathers watched the moment unfold, he texted a friend — “It is time to be dancing in the street.” About three hours later, Gathers stood with a microphone before a quickly growing crowd at the Freedom of Speech wall.

“It is a historic moment. We now have a woman now going into the executive office, and to put the cherry on that sundae, a Black woman,” Gathers said of Vice President-elect Kamala Harris. The crowd cheered.

“Make no mistake about it,” he said, “minorities drove this election to the point that we can come out and celebrate. For what you did, I humbly submit and subject myself to say thank you.”

Gathers and a handful of others spoke briefly at the wall of their joy that Democrat Joe Biden defeated Republican President Donald Trump in this year’s election. Then, local volunteers played music on loud speakers donated by Indivisible Charlottesville — and people danced.

Some of the people who attended had heard about the quickly-planned celebration through word of mouth. Others were simply on the downtown mall.

“We were just out for a walk and we stumbled across this,” said Claire Constant, a third-year University of Virginia student who plays on the soccer team. “It was the best environment I could have hoped for.”

Constant said her biggest fear throughout Trump’s presidency was the way he inspired some toward hate and violence.

“I feel like I can breathe again,” she said.

Others downtown echoed Constant’s thoughts. Shawn Heron, a local public school teacher, stood up in front of the crowd to talk about the impact Trump’s presidency had on some of his students.

“Four years ago, when we got back to school after the election and had to deal with kids crying because you had other little kids that were saying you’re going back to Mexico,” Heron said.

“How do you say that your president is wrong to a third grader? But also, this time after the election, I looked at my kids —” he paused as his voice choked with tears, “— and I said to them that I couldn’t look you in the eye again if I did not go out and do everything I could to elect a new president.”