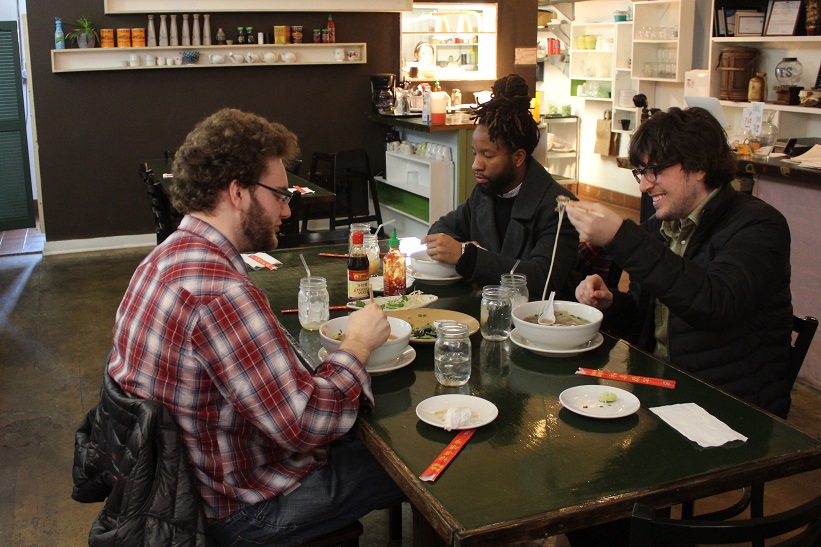 Urban Bowl and other Charlottesville restaurants must charge a 5-percent tax on the meals they serve.

Charlottesville restaurant owners are hoping a recent decline in business activity will move the City Council to reevaluate the city’s tax on prepared meals.

In addition to the 5.3-percent general sales tax, the city levies a 5 percent tax on prepared food and beverages offered by a restaurant or caterer.

Albemarle County has a 4 percent meals tax, the maximum rate that a county can adopt under state law.

Charlottesville’s meals tax revenues in September — the month following the Aug. 12 Unite the Right rally — were 11.3 percent lower than the previous September. The year-to-year dip in tax revenue represented a $2.15 million decline in spending on meals citywide.

“I have never seen such an interruption of sales on this level … for any given month in the last 21 years,” said Peter Castiglione, co-founder of the Charlottesville Restaurant Association and owner of Maya.

Ben Clore, co-owner of Oakhart Social, said some of his colleagues in the restaurant industry have had to ask for extensions on rent payments, and are unsure if their businesses will survive the winter.

“It was looking like a great year until August. And then September was absolutely devastating,” Clore said. “The hangover has lasted for quite a while.”

Overall sales in Charlottesville in September were down 11.9 percent, as compared with September 2016.

Meals tax revenues from October and December exceeded revenues from those months in 2016, indicating that Charlottesville’s restaurants might be on the rebound.

However, Castiglione said the city’s restaurants are still playing catch-up after the difficulties they faced in the late summer and fall.

Meals sales from August through November were down 5.3 percent, as compared with the same four-month period in 2016. Castiglione said restaurants depend on strong sales through November to make it through the slow winter months.

The white nationalist demonstrations, violence and political unrest seen in Charlottesville last year might have motivated some area residents to dine and shop elsewhere, Castiglione said.

“There are a lot of people in the county who are so displeased with city politic in Charlottesville that they are not coming to the city on purpose,” he said.

In addition, Castiglione said Albemarle County shopping centers such as 5th St. Station and the Shops at Stonefield could be filtering customers from the greater Charlottesville area.

Castiglione said the Charlottesville Restaurant Association plans to ask the City Council to reset the meals tax to 4 percent, “… to give us a level playing field.”

If the city is unwilling to reduce the tax rate, Castiglione said, the association will request for 1 percent of meals tax revenues to be reallocated into a marketing fund for the restaurant industry.

A fifth of meal tax revenues already is dedicated to the city’s debt service fund, which supports future bond issues for capital projects.

“If there’s ever been a time that we need help from the city and its tax base, it is now,” Castiglione said.

In 2015, with Charlottesville facing a potential budget deficit, the City Council voted to raise the meals tax from 4 percent to 5 percent. The increase was recommended by Charlottesville’s Blue Ribbon Commission on Sustainable School Funding in 2014.

“The Charlottesville meals tax is part of what has allowed the city to maintain its strong support of public education,” said Kim Powell, assistant superintendent of the school division.

In fiscal year 2017, which ended June 30, revenue from the meals tax reached a new high of $11.7 million, exceeding the city’s budget projections. The extra revenue made up about $466,000 of Charlottesville’s $8.94 million budget surplus for that year.

The 2015 meals tax increase was opposed by many Charlottesville restaurant owners, including Castiglione and Clore.

Clore said it is unfair for restaurants to bear the burden of tax hikes due to the industry’s inherently low profit margins.

“For a restaurant, a 10 percent profit is high; in any other industry, that’s insane,” Clore said. “When there’s a little fluctuation in taxes, or overall business, it takes a huge toll on restaurants.”

“[The meals tax] probably is causing unintentional harm,” said Gwendolyn Hall, owner of Twisted Branch Tea Bazaar. “It would behoove our City Council and city manager to look for other sources of revenue.”

Ivan Rekosh, owner of Zocalo on the Downtown Mall, said that taxing an additional cent on the dollar has a negligible effect on the price of a single meal.

Rekosh said he would like the city to direct more tax revenues from Downtown Mall restaurants toward additional lighting, holiday decorations and other improvements to the mall.

“I would like to see more of the money that the Downtown Mall generates stay downtown,” he said.

Castiglione said Charlottesville’s recent economic troubles have resulted in more collaboration between restaurants and retailers to advance their common interests.

“The silver lining of this situation is that, hopefully, in the future, we will really start working together with the city to find ways to bring missing revenues back to Charlottesville’s business districts,” he said.