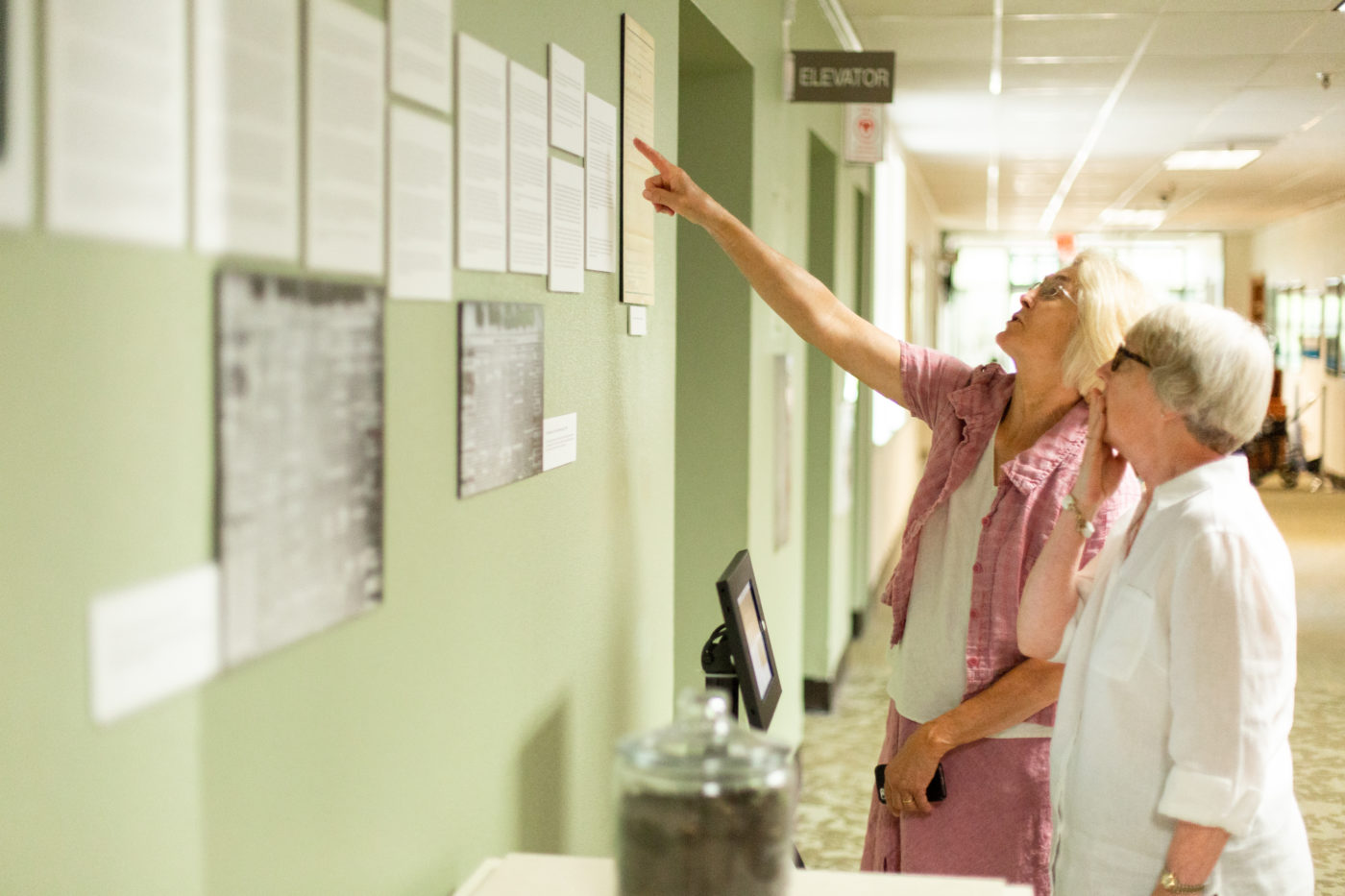 Albemarle quietly one of few local governments with equity office

The hearing late July on redeveloping the Southwood Mobile Home Park was an unusual Albemarle County meeting in many ways.

Audience members overflowed the auditorium where the meeting was being held. Spanish-speaking residents of the park listened to the meeting through a translator arranged by the developer Habitat for Humanity of Greater Charlottesville. And both audience members and members of the Albemarle Planning Commission deliberating about the project spoke explicitly about race and racism.

While the white supremacist rallies in August 2017 that turned Charlottesville into a hashtag have shaken the way the city discusses policy, the reverberations have been less public in the county government next door.

Board of Supervisors Chairman Ned Gallaway said he thought the substance of policy and votes were a better measure of whether the board was achieving racial equity than a keyword search.

One reason for that, Gallaway said, is that the most productive conversations about race and equity happen in less public settings than the board’s meetings.

“Race is a very emotional, personal item to discuss,” Gallaway said. “For change to happen, if you’re going to move the needle or persuade people to think differently or feel differently about it, then it plays out in experiences like the pilgrimage.”

Gallaway and Supervisors Diantha McKeel and Norman Dill participated in a pilgrimage between Charlottesville and Montgomery, Alabama, during the first anniversary of the white supremacist rallies that happened in the summer of 2017.

The pilgrimage began and ended with commemorations of John Henry James, an African American ice cream salesman who was lynched in Albemarle in 1898. In between, roughly 100 people toured civil rights sites and museums by bus to learn about the past that lives on in the present, C-VILLE Weekly reported.

University of Virginia professor Frank Dukes, who specializes in collaborative planning and also was on the pilgrimage, said that the answer to whether local governments need to discuss race and class to achieve racial equity “is as about absolutely yes as you can possibly have.”

“If we don’t, then we tend to replicate some of the harms and some of the practices from the past,” Dukes said.

Dukes offered the example of opposition in his neighborhood to new apartments being proposed on Rio Road in the context of a housing shortage that disproportionately affects people of color.

“Even though people would vehemently deny that there’s anything racist about opposing more density and development, nonetheless, it has racial implications that are more harmful to people of color than they are to people who are white,” he said.

Dukes has argued that silence and inaction around past harms also make communities less able to deal with change. In a chapter of a 2011 book called “Collaborative Resilience: Moving Through Crisis to Opportunity,” Dukes and two co-authors drew lessons from efforts to reckon with past traumas in Bainbridge Island, Washington; Greensboro, North Carolina; and at UVa.

Albemarle’s Office of Equity and Inclusion 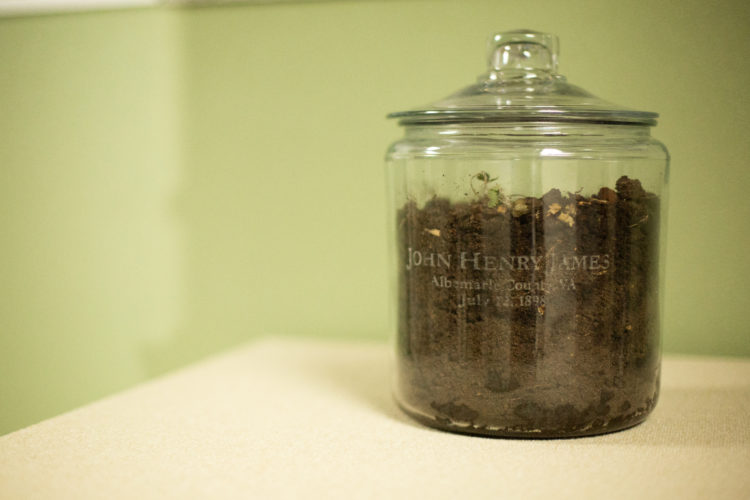 Soil from the site of the lynching of John Henry James sits in a vessel in the Albemarle County Office Building. The county on Wednesday, July 17 unveiled a traveling exhibit commemorating and contextualizing the 1898 lynching.

In one way, Albemarle is more active and forward-thinking about equity than many local governments around the country.

Albemarle founded its Office of Equity and Inclusion in late 2018. It currently is a one-woman department, but Director Siri Russell is looking to hire a second full-time employee.

ICMA, which stands for International City/County Management Association, surveyed its members in November 2018 about whether their local governments had chief equity or diversity officer positions. Only 6% of those who responded said that they did.

ICMA’s membership includes roughly half of the 4,000 local government managers in the U.S.

The city of Charlottesville does not have any equity or diversity officers, but it is considering creating up to three such positions.

Russell’s office has coordinated ongoing county remembrance efforts for James. She has also partnered with other individuals and organizations to tell a more complete history of Albemarle that includes more women and people of color through markers and exhibits, Russell said.

In addition to these symbols of inclusion, Russell’s office is establishing a baseline for future work on systemic inequalities based on results from a citizen survey.

Russell said that as she started her department, she talked to equity offices elsewhere, including in somewhat rural places like Fort Collins, Colorado, and Champaign, Illinois. She said that she asked the departments about how they were defining success and what they would do if they could start over.

“One of the things in a lot of places that was lacking was that preliminary understanding of what the baseline was. We were talking to folks who were maybe three to four years in, and now they were saying they were working on metrics,” Russell said.

With the help of UVa’s Initiative for the Study of Equity Through Community Engaged Scholarship and the UVa School of Architecture, Russell plans to pair quantitative data with stories of Albemarle residents collected at laundromats, schools, country stores and other unusual places of engagement.

Russell’s office spans all kinds of equity and diversity – race, place, gender, income and more. She said that she knows county residents participate in conversations about race, at the Jefferson School African American Heritage Center, for example, and how the county plans to approach race as a public conversation will be unveiled in several months.

“For us in the county, we have not necessarily been having a conversation about race,” Russell said. “We’re still growing in both our comfort and our capacity to engage in some pretty complex conversations that have not always been a part of our organizational dialogue or language.” 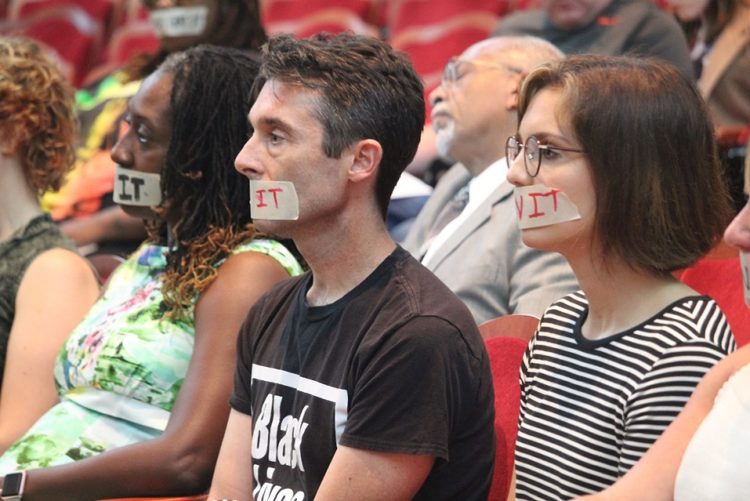 The Hate-Free Schools Coalition of Albemarle County organized a protest at a School Board meeting on Aug. 30, 2018.

Much of the public conversation about race in Albemarle has focused on its school system, thanks to an anti-racist group called the Hate-Free Schools Coalition of Albemarle County.

The group is made up of parents of children currently or formerly in Albemarle County Public Schools and its activism was prompted directly by the Aug. 11 and 12, 2017, white supremacist rallies.

Moxham said that the school system seemed unprepared to talk about the trauma of the rallies with students or support students who wanted to protest systemic racism.

“There was such an uncomfortableness, even a real lack of ability to comprehend how deeply traumatizing that event was for our entire community,” Moxham said. “Whether you live in the city or the county, it literally happened here.”

Hate-Free Schools successfully has pushed county schools to remove Lee-Jackson Day from its calendar and to interpret its dress code to exclude Confederate imagery. The coalition still is pushing for more symbolic changes, arguing that these impact student health and achievement.

Moxham said that the limited time available to Hate-Free Schools parents after work has prevented activism from spilling over into the Board of Supervisors meetings, which start in the early afternoon. However, she said that she strongly supports Russell’s work with the county’s equity office.

Another focus of county activism has been the Albemarle-Charlottesville Regional Jail’s policy of notifying Immigration and Customs Enforcement when undocumented immigrants are scheduled to be released from jail.

Albemarle County resident Edgar Lara said that while Aug. 12 was a defining moment for the region, the Latino community he serves as community engagement director of Sin Barreras is more afraid of ongoing policies like ICE notification.

An estimated 300,000 undocumented people are driving without a license in Virginia. Lara said that these are families that want to act legally but are barred from doing so, and that the stress of getting caught and then possibly deported makes immigrant families live in constant fear.

Lara is himself a citizen and a veteran of the U.S. Marine Corps, but he said that he does not want to distance himself from the minority within the Latino community that are undocumented. Lara said that even with citizenship, his community faces racism.

“I’ve had to deal with it all my life, with the jobs that I’ve had,” Lara said. “You don’t always name it and are not always aware, but upon reflection, yeah, it’s always been there.”

One balm for that fear that Lara suggested is Sin Barreras’ annual Cville Sabroso Festival. The festival, which celebrates Latin American dance, food and activities, is scheduled for Sept. 21 at the IX Art Park.

The Board of Supervisors is scheduled to vote on the Southwood redevelopment project during its Wednesday meeting.