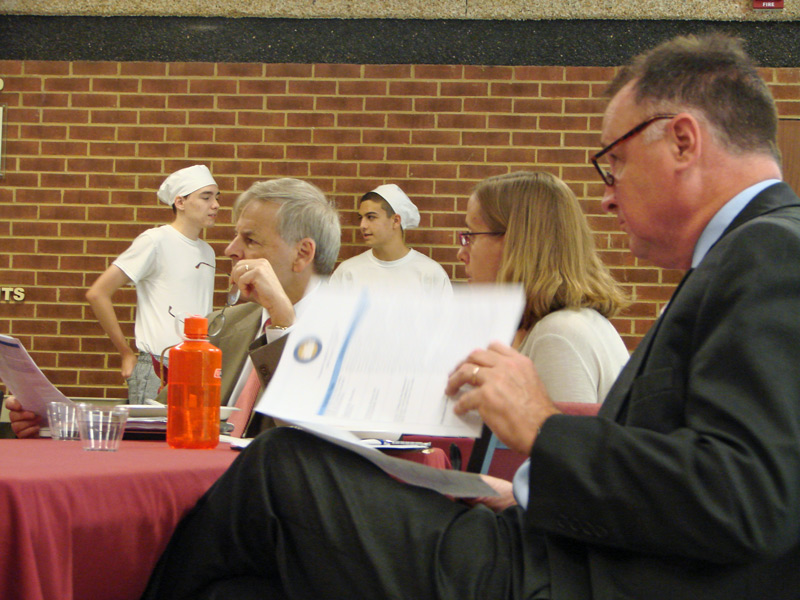 The Charlottesville School Board wants the General Assembly next year to expand virtual education statewide, and to address the impacts that some out-of-district students are having on the division’s drop-out rate.

Charlottesville Superintendent Rosa Atkins encouraged legislators to develop a more robust set of online courses at the state level. Doing so, Atkins argued, would eliminate the need for legislation that would sort out which school division received state money for a student who attended one division locally, and one virtually.

“I think following this would prevent some very uncomfortable times with different school divisions trying to compete for each other’s students,” Wade said.

The Commonwealth does offer a program called Virtual Virginia, but Atkins argued that the initiative doesn’t serve the demand for online courses.

In past years, Charlottesville City Schools and Albemarle County Public Schools held talks to collaborate on a joint virtual education system. Toscano asked what happened to those talks.

“We had come pretty far along in the discussion, so I was pretty disappointed when it fell through,” Wade said.

“Charlottesville City favored investing in curriculum already developed while we preferred developing our own on-line curriculum,” Giaramita said. “There are advantages to both options, but we were not able to agree on a joint approach.”

“Last year we had seniors who were
good, solid students, who didn’t miss
class, had decent GPAs, but because
English wasn’t their first language,
they struggled to pass,” Atkins said.

Giaramita added that the two divisions do, however, collaborate on efforts such as STEM education, as well as the recently-ended Safe Schools Healthy Students grant.

Toscano supported the idea of a state-housed bank of online classes.

“Then you get standards that are comparable across the state,” Toscano said.

Charlottesville’s public schools also play home to numerous out-of-district students who live either in group homes or foster care. While the division has said that it supports providing services to these children, doing so can negatively impact the division’s drop-out rate.

Atkins said that within a short period of time, group home students often leave and do not re-enroll in their home school division, which then counts as a drop-out against Charlottesville’s numbers.

“Either the sending school should be held accountable, or the drop out shouldn’t be counted against us…when we only have the student for a month or two,” Atkins said.

Toscano said that the issue is complicated because the sending school divisions argue that they have no control over the student once he or she is placed in another district.

School Board member Leah Puryear agreed, and called for time limit to be set.

Deeds said he thinks that “90 days or a semester is a fair amount of time.”

Last year Charlottesville had 31 out-of-district students in either group homes or foster care. While none of those students dropped out, Charlottesville schools spokeswoman Beth Cheuk said, the figure fluctuates yearly and can sometimes “represent at least a percentage point” in the graduation rate.

Also linked to graduation rates is the issue of ESOL students, who enter the division in their later school years, and who are having difficulty passing some Standards of Learning tests.

“Last year we had seniors who were good solid students, who didn’t miss class, had decent GPAs, but because English wasn’t their first language, they struggled to pass,” Atkins said.

In the 2013-14 school year, Charlottesville had 11 ESOL students who didn’t graduate because of low scores on reading and math SOL tests. Of those 11, eight missed fewer than 10 days of class.

Because these students are as at-risk of failing SOL tests as Special Education students, Atkins said, the Board wants the option of giving what are called Locally Awarded Verified Credits—an option available to SPED students.

Deeds said that because a commission to reform the SOL has been formed, most SOL-related issues are being directed to that commission.

“My concern right now is that with this commission any SOL legislation is going to be shoved into that study, and so probably the best approach on this issue today is to go to the state superintendent,” Deeds said.

The Board also asked for a change in legislation that would allow the division’s new STEM education model at Buford Middle School to be officially recognized as a laboratory school.

With this designation, Charlottesville could compete for additional funding opportunities, however current law requires oversight by a partnering university.

“In the legislation to have a lab school, the partnering university has to have governance, but UVa isn’t interested at all in having governance over a middle school,” Atkins said.

Toscano said that it’s possible that the legislation could be changed so that the lab school’s governance would be handled through a memorandum of understanding.

The Charlottesville School Board will meet Thursday, Oct. 2 at 5:00 p.m.