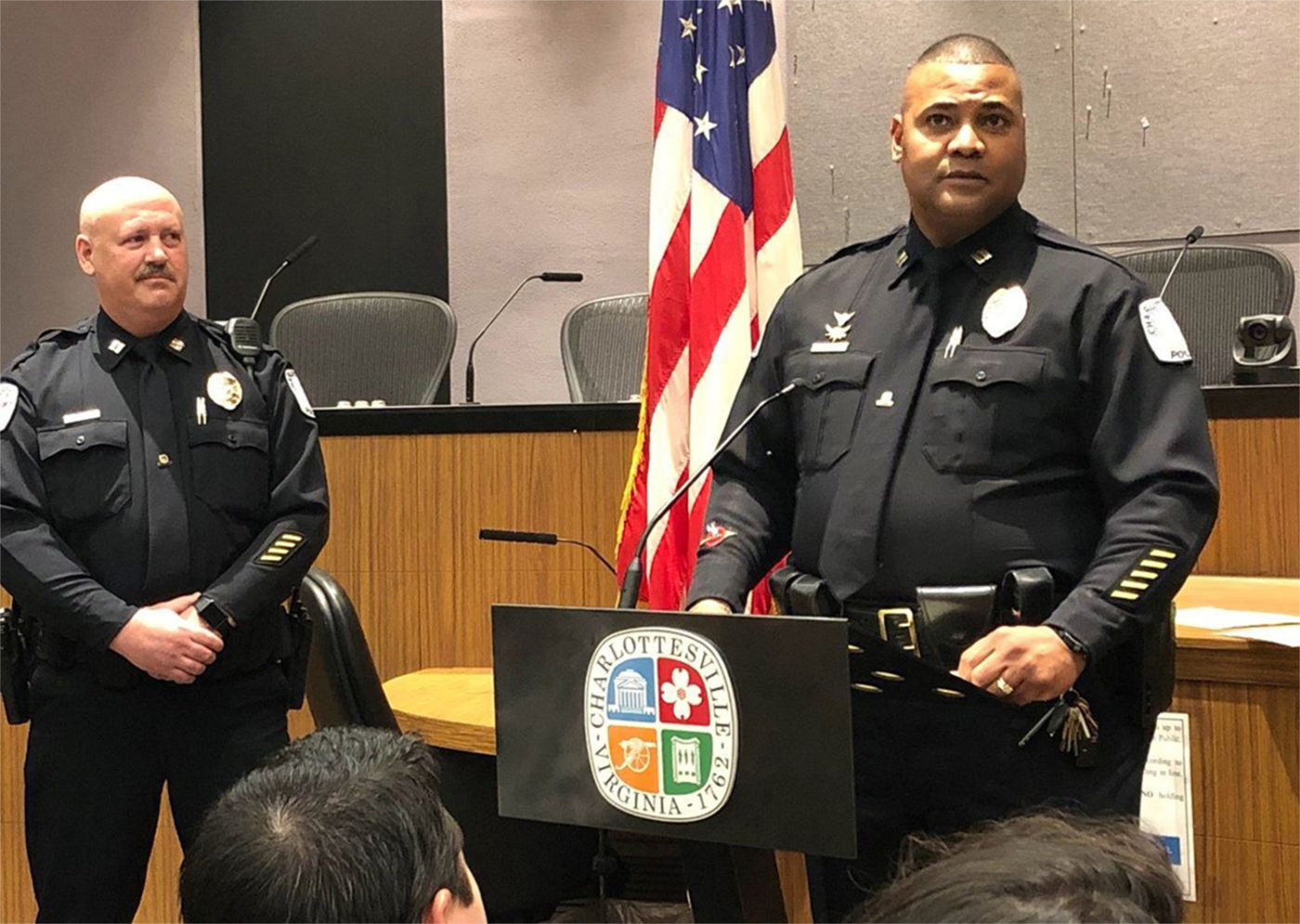 James Mooney (left) and Tito Durrette (right) at their promotion ceremony to the rank of Captain in January 2019.

Charlottesville’s assistant police chief, Maj. Jim Mooney, tried to retire in late August. As of this week, he officially has.

After Mooney submitted paperwork to retire on Aug. 31, City Manager Chip Boyles fired police Chief RaShall Brackney the following day on Sept. 1 and announced that Mooney would remain in his role for the next six months. As of Friday, however, Mooney has now officially retired.

It’s unclear why Mooney has suddenly left. He could not be immediately reached for comment.

Captain Latroy “Tito” Durrette has been promoted to the rank of Major and will now carry out daily operations as the new Assistant Police Chief. Durrette will be leading the department until a new interim police chief is hired.

“I am humbled to have this opportunity,” Durrette said in a news release. “I want to focus on the dedicated men and women of this department. It will take everyone – in the community and in the department – to accomplish the goal of continuing to move policing forward in Charlottesville.”

The announcements fall amid ongoing issues within the police department and city hall since Brackney was fired.

Most recently, Charlottesville Mayor Nikuyah Walker publicly accused the Virginia Chapter of the Police Benevolent Association of using secret recordings of Mooney to coerce the city manager into firing the police chief.

It’s unclear what the recordings say, and Boyles has confirmed that they exist. But he denies they had any impact on his decision to fire Brackney.

“There was never a quid pro quo arrangement with the PBA regarding those audio recordings, or videos, or any other information that they had that they felt relevant for the Charlottesville Police Department,” Boyles said at a recent council meeting.

He added that he had heard one of the recordings and didn’t find it damaging to either Mooney or the department.

However, during a phone conversation with Walker (that Walker also secretly recorded and then played at Monday’s council meeting) Boyles said that he believed the PBA and it’s president, Michael Wells, wanted Brackney gone.

“I can’t defend just going back and forth. This Wells guy, all he has in his sights is the chief’s badge,” Boyles said in the recorded conversation. “He is living 24 hours a day seven days a week to try and get her fired. He can say all he wants to, I think he could care less about the officers. For him, it’s a mission.”

Boyles explained to Walker that Mooney may have felt “caught in the middle” due to recordings Wells allegedly had of Mooney that he may have been “afraid of what may have come out of those conversations if they weren’t heard in entirety.”

In the meantime, Boyles announced plans for how the city would search for its next chief. Details include a committee of area stakeholders, city officials, and at least three civilians would be assembled to select an interim police chief while a contracted firm searches for a permanent police chief.

Charlottesville Tomorrow reached out to the city manager at the time with questions about how the citizen members of the committee will be selected and what key qualities are ideal for the next chief. No answers were relayed and city spokesperson Brian Wheeler says there are no further updates available at this time.