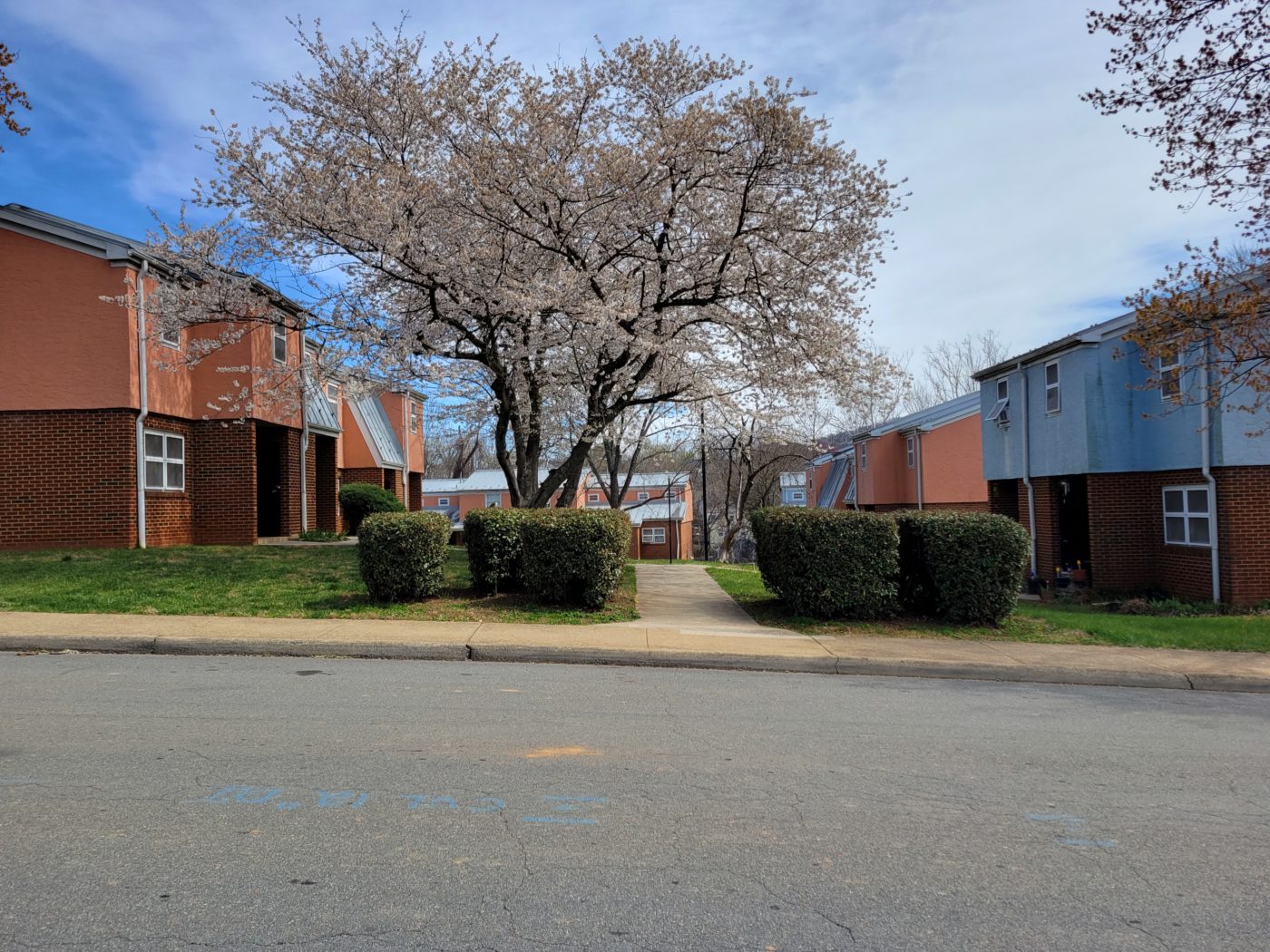 Some mature trees already line some of the sidewalks in the South First Street neighborhood in March 2022. The residents there, who were consulted about what they wanted from new development, advocated for green space.

In 2004, 50% of land in Charlottesville was covered by trees. By 2021, trees covered an estimate of just 35% of the city, according to a recent analysis of satellite images by the city’s Tree Commission.

Even more concerning, officials say, is that the rate of loss appears to be accelerating. The Tree Commission hired a firm to complete a larger and more in-depth study of Charlottesville’s urban tree canopy. Once complete, commissioners hope the study will provide a clearer picture of why the city is losing trees.

City government has known for years that its tree canopy is declining. The Tree Commission and the Parks and Recreation have been working to plant saplings to replenish the canopy. The goal was to plant 200 trees in the city each year and they have not reached the goal. However, so far in 2022, the city has planted 162.

The commission is asking for an increase in funding from the city — $100,000 up from $75,000 per year — in hopes of hitting the 200-tree goal. (The commission is also asking for an additional allocation of $105,000 to combat an invasive insect that is quickly killing local ash trees. The emerald ash borer has been boring into ash trees across the nation, causing the trees to fall or need to be removed.)

But planting new trees won’t immediately solve the problem because trees can take over a decade to reach maturity. Tree Commission members say the city must take action now to protect the existing canopy.

A simple place to start is with new developments where cities tend to lose many trees, officials say.

This year, for the first time, localities like Charlottesville are allowed to adopt ordinances to increase the number of required trees in new developments or require compensation from developers for damage to or removal of trees during their construction.

The Virginia General Assembly passed a bill that allows local governments to create these requirements, with the caveat that when developers cannot comply, they are required to contribute to a state fund that would help plant forest buffers along waterways in agricultural areas to reduce runoff into streams and rivers.

“It gives you some flexibility to create a plan for the replacement of trees. And if you can’t on your development site, you can do it elsewhere,” said Sen. David Marsden, D-Fairfax, who carried the bill.

Charlottesville City Councilor Michael Payne said he sees tree preservation as a priority in the upcoming zoning rewrite and that he feels the Council would consider adopting such an ordinance.

However, he said a great way to build on an ordinance would be “enhanced coordination” with city staff.

“What may make the biggest difference is a lot of boring, behind the scenes during the development process,” Payne said. Staff, he said, can work with developers to change plans to prevent the destruction of trees and root systems, setback requirements or the width and location of sidewalks. Types of trees and where they are planted factor into how much a tree’s roots or branches can sprawl and where.

“If there’s no plan or ordinance in place, the path of least resistance for developers may be just taking down a tree,” Payne said.

When developers want to preserve trees, they have to contend not just with root and branch space, but also with underground utilities. 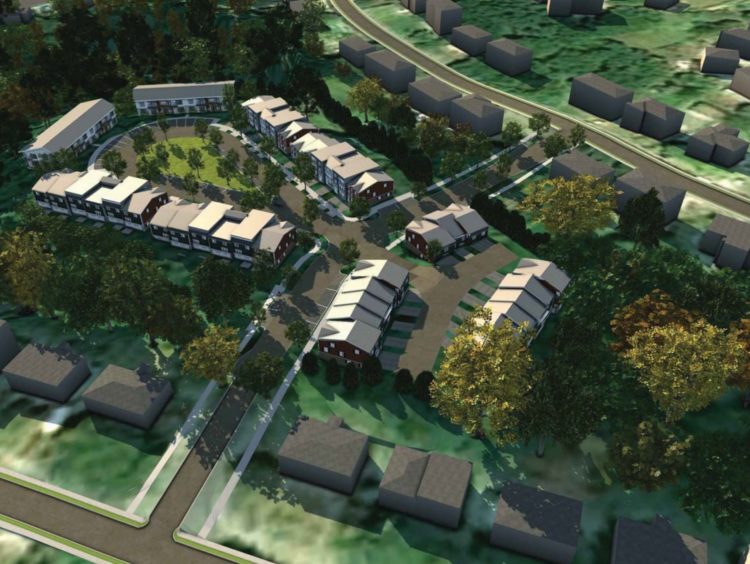 A rendering of the Flint Hill development proposal near Fry's Spring in Charlottesville from 2020. The neighborhood is being planned with trees lining the roads, and with 10 acres of wooded area.

Charlie Armstrong, a vice president with Southern Development, has experience with the balancing act.

His company’s latest new development, Flint Hill, is in the final stages of approvals before construction can begin. It will be a neighborhood of townhomes and condominiums near Fry’s Spring. Armstrong plans to leave about half of the 10 acres wooded.

“The area where new roads and homes will be built will have street trees on all roads,” he said. There will also be “a centrally located biofilter to treat stormwater, which will also have small trees in it.”

The newly planted trees throughout the rest of the development will take years to mature enough for residents to reap the full benefits.

“It’s never ideal to have to remove a tree when you’re building roads and homes, but sometimes it’s inevitable,” Armstrong said. What developers can do, he said, is be mindful of limiting what has to come down.

BRW Architects, the firm working on the South First Street public housing redevelopment, said they had to walk a similar line. The residents there, who were consulted about what they wanted from the new development, advocated for green space.

“I think the idea of having places to gather and green spaces with trees will be good for me and my neighbors,” said South First Street resident Estephany Kepchar. In summer, her family relies mostly on their window air conditioning units to cool things down.

“These are expensive,” Kepchar said as she motioned upwards to the window unit on the second floor of her townhome. “So if you’re talking about helping people who don’t really have the money to buy AC like this, of course some trees will help with that.” 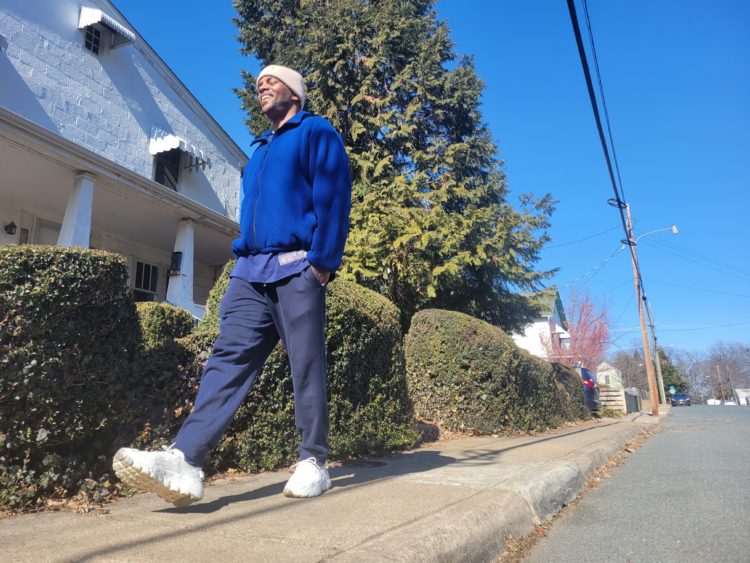 Eddie Howe walks through his neighborhood in March 2022. A recent report by the city’s Tree Commission found that less than 20% of 10th & Page and the nearby Starr Hill neighborhood had tree coverage, while other areas like Barracks/Rugby and Greenbrier have canopies near 60%.

Much of Charlottesville tree canopy is concentrated in neighborhoods that are historically white. Read more about another neighborhood, 10th & Page, which has fewer trees and higher temperatures than other residential neighborhoods.

The developers took the input and created a plan that places apartment buildings along an already wooded area across from townhouses along South First Street, said Karim Habbab, an associate with BRW Architects and a Planning Commissioner with the city.

The plan preserves existing trees and also calls for planting saplings along sidewalks and trails throughout the neighborhood and between buildings. South First Street, which is in many ways the front face of the neighborhood, has sporadically-placed trees already — providing a bit of shade to some of the residents. Plans for the redevelopment call for the street to become more tree-lined.

However, Habbab said, some trees had to come down during construction in order to make some of the buildings accessible. The project overall creates benefits for residents, he said.

About 70% of the areas where trees can be planted in the city are on private property. That leaves only places like school and municipal grounds along with public parks or rights of way as possible planting sites.

The city has focused on these areas for about two years, but not all residents have been enthusiastic, Anthony said.

“Where we are running into an issue is that some rights of way are in front of private property and there are a good number of individuals that do not want trees in front of their house,” he said. “Some residents have said, direct quote: ‘I don’t want to rake up the leaves’ or ‘I’m getting too old.’”

Anthony said that there have also been incidents where residents have undone some of the city’s planting work.

“We want to work with residents of Charlottesville, but it’s hard,” Anthony said. “We could take a harder stance, but we’ve had people just rip the young trees up and throw them on the side of the curb.”

Still, Anthony said it will take a combination of public and private effort to maintain or bolster the city’s urban tree canopy. He noted the efforts of volunteer groups like the Charlottesville Area Tree Stewards and the nonprofit, ReLeaf CVille, for their planting work. But, he said, as much as city staff and volunteers wish to plant, education is the next step to preserving or bolstering the urban tree canopy.

And it seems that people are interested in planting trees. Last month, Charlottesville’s utilities department partnered with the Arbor Day Foundation to give away 250 trees to interested residents, with guidance on where to plant strategically on their properties. The program launched March 14 and quickly ran out of trees. Residents can now sign up for a wait list.