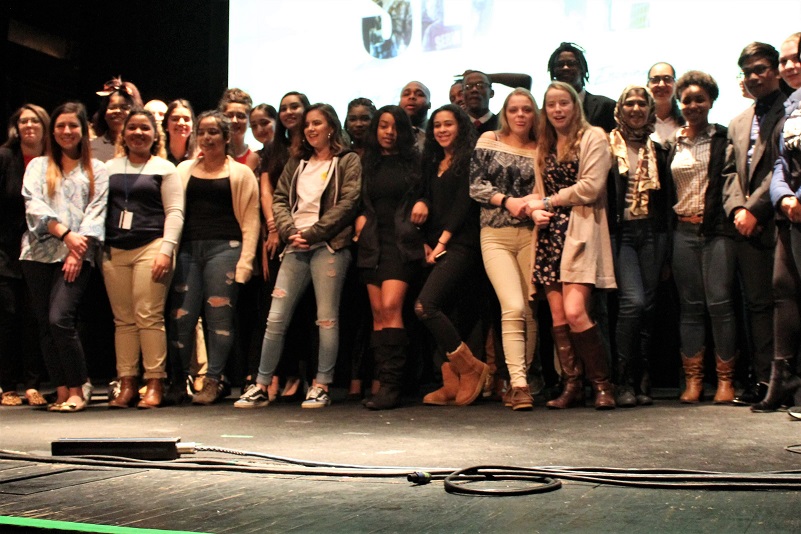 Winners of the inaugural Project S.E.R.V.E. pitch competition gather on stage at the Jefferson Theater.

Charlottesville High School students Jerry Harris and Jaquan Wood have long dreamed of organizing a pickup basketball tournament that would bring together a broad spectrum of Charlottesville residents.

“We feel like the Charlottesville community is segregated at times,” Wood said. “We want to bring everybody together with basketball and food.”

Eight student teams in the CHS AVID program received a combined $10,000 to implement their proposed community service projects at the inaugural Project S.E.R.V.E. pitch competition, held at the Jefferson Theater.

CFA Institute, as part of a new strategic community partnership with CHS, donated the prize money.

A global financial credentialing organization based in Charlottesville, CFA recently gave CHS $50,000 to modernize the classroom used by the AVID program and the CHS Student Investment Group, and it has pledged another $82,100 to support a finance academy educational initiative.

AVID, or Advancement Via Individual Determination, is a college readiness course offered at thousands of American schools. The program is geared towards students who would be the first in their family to attend college.

Brian Kayser, AVID coordinator at CHS, said he has helped his students plan service projects as a classroom assignment in previous years.

“However, these projects have always stopped [in the classroom] because we have never been able to enact what we wanted to do,” Kayser said. “Now we have a chance to make these projects happen.”

CHS students Malaysia Brice and Dyshe Smith won funding for My College Toolbox, a concept for a mobile app that would help high school students track their progress on each of their college applications.

“A lot of juniors and seniors have problems organizing their college process and trying to manage their school work — I know I did,” Smith said. “I didn’t know the workload was that extreme. I had to adapt to it.”

Brice and Smith said they hoped to enlist volunteer programmers from the University of Virginia and the CHS science club, BACON, to develop the My College Toolbox app. They said some of their winnings would be used to provide pizza and soda at coding sessions.

Adiba Khaydari, Katt Umana Roman and Brshna Sultan won funding for their proposal to install and stock a new menstrual product dispenser in a women’s restroom at CHS.

“Doing this will show young women that their needs matter,” Roman said.

A group of nine students won funding for Project H.O.P.E, their proposal to send packages of school supplies to developing nations. Kayser helped the group identify a school in Ghana to receive their first shipment.

“We want our peers to take a stand and help out other students, and advance education around the world,” said Nadiya Khaydari, who also serves as a student representative on the Charlottesville School Board.

Virginia Johnson said she hoped Charlottesville residents would support Project H.O.P.E. by attending future fundraisers. “This really is a community project,” she said.

Other winning project ideas included a school supply drive for refugee students at CHS; a Black Film Festival at the high school’s Martin Luther King, Jr. Performing Arts Center; a truck that would distribute condoms and clean needles to prevent the transmission of HIV; and a care package campaign for local children undergoing treatment for cancer.

This year’s Project S.E.R.V.E. competition was judged by Brian Kayser’s wife, Abigail, a doctoral student in curriculum and instruction in UVa’s Curry School of Education; Jeanne Murphy, director of curriculum development at CFA; and Jaelan Vallier, a tutor for the CHS AVID program.

“I think this event counters the stigma surrounding teenagers, the perception that they are very self-centered,” Vallier said. “You can see they really care about their community.”