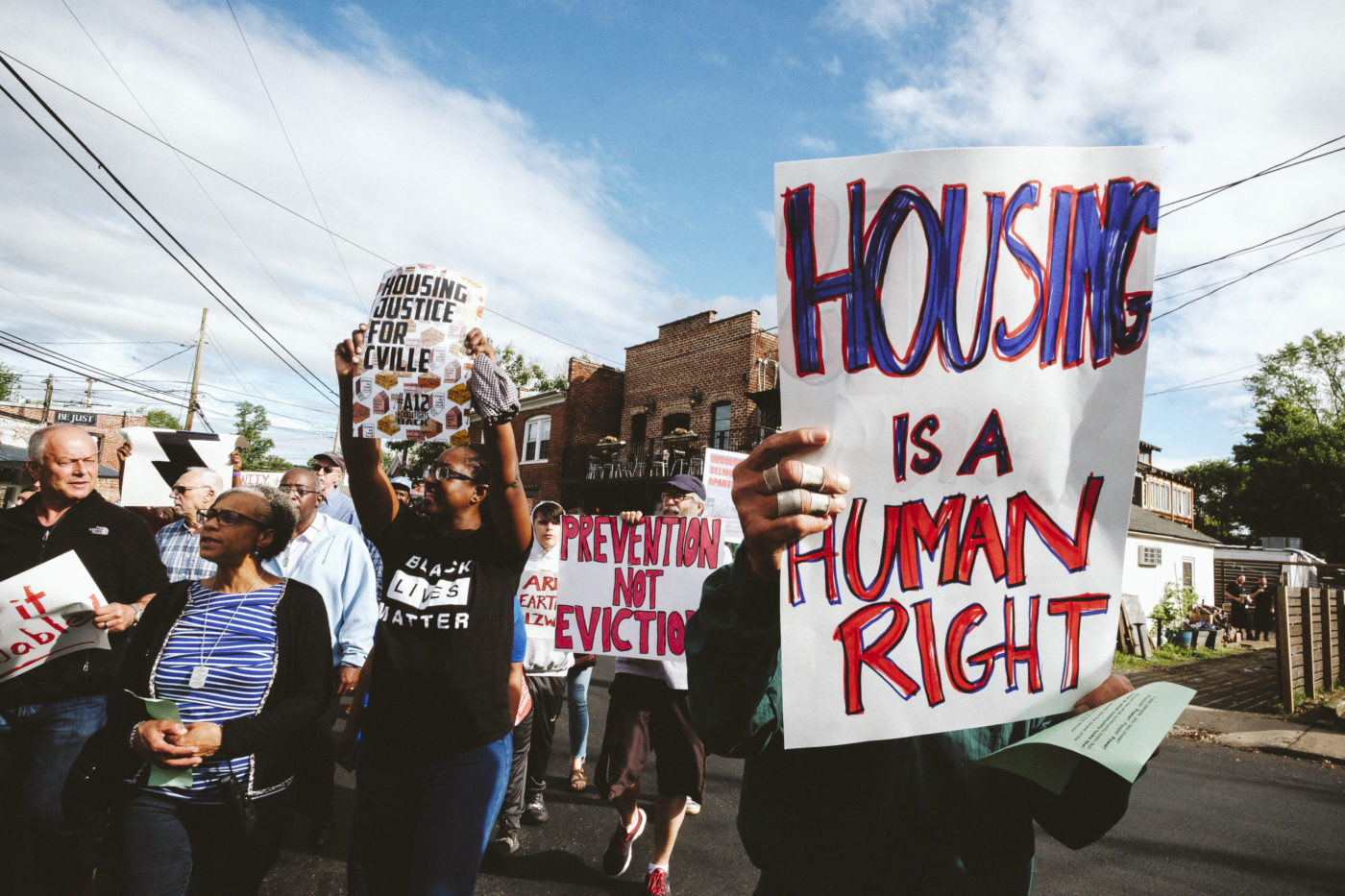 Protesters march from Belmont to Charlottesville's Downtown Mall on Sunday, May 5, 2019 to protest the eviction of residents from the apartment buildings at 1000 Monticello Rd.

One of Charlottesville’s advisory committees is hoping to learn from the recent eviction of low-income residents from an apartment complex in Belmont to prevent similar situations in the future.

On Wednesday, the Housing Advisory Committee decided to survey city landlords to create a list of affordable apartments like 1000 Monticello Road, formerly known as the Belmont Apartments.

“That property was naturally occurring affordable housing, partially because it was very run down,” said Sunshine Mathon, a HAC member and executive director of the nonprofit Piedmont Housing Alliance.

“Having an assessment of existing, naturally occurring affordable housing potentially gives us the opportunity, … at the city level or nonprofit level or a combination, to intervene before we lose it.”

1000 Monticello Road is a 23-unit apartment complex that was family owned from 1975 to 2018. The current owner, Andrew Holzwarth, has terminated the leases of 14 of the building’s households and they have had to move out.

Holzwarth has said that he would like to keep a minimum of 12 to 13 units affordable in the current building. However, the rent is likely to be higher than the former Belmont Apartments residents can afford. Several of the former residents are elderly, presumably living on fixed incomes.

Stacy Pethia, who was the city housing coordinator until December, had started a landlord list before she left the city to become Albemarle County’s housing planner. The list was based on her experience surveying landlords in the Washington, D.C., area for the Metropolitan Washington Council of Governments.

Pethia said the local government members of the COG used the list of affordable apartments to offer energy-efficient upgrades in exchange for a commitment to keep the units affordable for a certain number of years.

“They would be able to keep an eye on the market to see when those buildings would pop up for sale. Particularly, Arlington County jumps on at the front end. They don’t always get to preserve all of the units, but they will work with the buyer to preserve, say, 30% of those units as affordable,” Pethia said.

“We also want to use it to deliver some solutions. We have money from Dominion to go do this,” Meyer said. “This is a very important piece of information that we would like to see happen.”

LEAP has an energy-efficient upgrade program for senior and low-income Dominion Energy customers.

Alexander Ikefuna, director of Charlottesville’s Department of Neighborhood Development Services, suggested that the HAC develop the survey form and decide how it would be distributed. City staff would then distribute the survey and hand it back to the HAC for analysis.

The HAC decided that its policy and outreach subcommittees would work out the survey details. The city will advertise the date for the next subcommittee meeting in advance of the meeting.