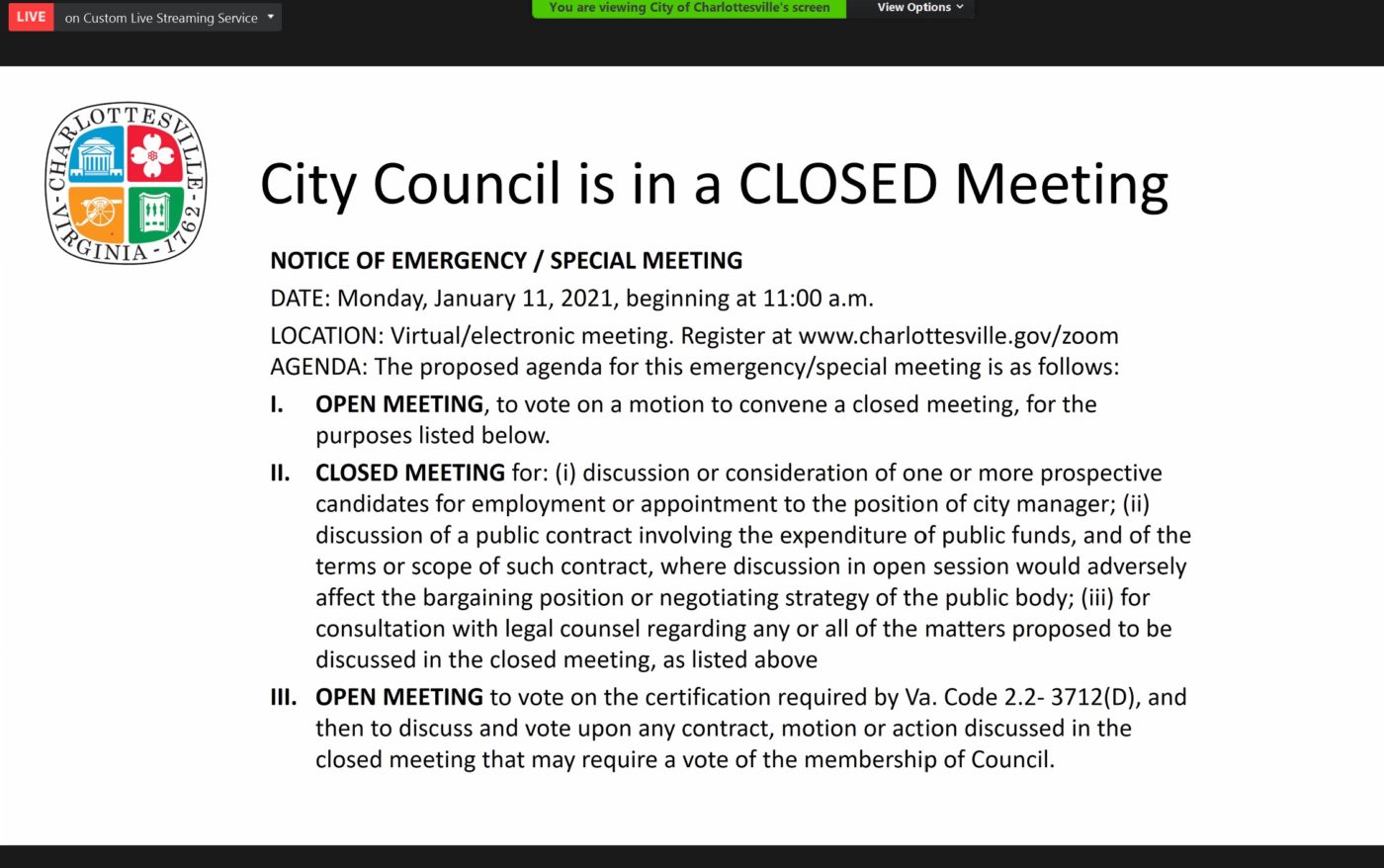 After more than 15 hours in closed meetings in less than a week, the Charlottesville City Council is still silently chipping away at resolving issues that contribute to its current “leadership crisis.”

On Monday, the council’s latest meeting lasted for 5½ hours and ended with no actions taken, but Councilor Michael Payne said it won’t stay that way for much longer.

While he agrees with the City Council’s recent meetings being out of the eye of the public, he said it’s important that the city’s legislative body communicate with the public about “the specifics of the leadership crisis and what steps are necessary to change the dynamics that led to this point.”

He said that though the conversations have been initiated in closed session, he anticipates that, within the next few days, the council could begin to “have more public discussions and be able to communicate with the public about what actions [the] council is taking to rebuild stability within the organization.”

According to Megan Rhyne, executive director for the Virginia Coalition for Open Government, calling for emergency closed door meetings is legal and not unprecedented for any body of government.

“It’s commonplace. That’s why there are 40 or 50 some exemptions in the code to allow for closed door sessions,” Rhyne explained.

Citing Virginia state code 2.2- 3712(D), council’s recent spate of closed meetings have been called for the purposes of:

Rhyne said what would be illegal is to stray from the advertised topics of discussion during the closed session. During the Jan. 6 closed meeting — the first of these recent meetings — the council came out of a closed session two hours into it to add that they were including the “discussion or consideration of the performance of city councilors.”

By Monday’s meeting, that last topic was not part of the advertised agenda.

“As for talking about the city manager, contracts and legal advice it sounds like there is at least plausible legitimacy in using those exceptions,” Rhyne said.

Charlottesville Tomorrow reached out to every council member for comment on why they wanted their meetings on these matters to remain private and only received response from councilors Sena Magill and Payne at the time of this publication. Magill explained she couldn’t say anything other than that the meetings are specifically due to the items listed in the notice.

Additionally, the notice does give indication that for matters concerning the expenditures of a city manager search and contract, a private discussion is best for the city.

The meetings come as the city has suspended its search for a city manager, recent council member infighting lingered and a growing number of key vacancies occurred in city staff.

On Jan. 8 — the date of the council’s second closed meeting — Deputy City Manager Letitia Shelton resigned. Her final day will be Feb. 19. Shelton had been brought on by the previous city manager, Tarron Richardson, who resigned in September.

Richardson’s departure follows several years of instability in local government. City Attorney John Blair currently presides as an interim manager and is the third person in the position in a permanent or interim role since 2018. Following 2017’s deadly Unite the Right rally, where white supremacists and neo-Nazis descended upon Charlottesville, the contract for Maurice Jones, who was hired in 2010, was not renewed and Mike Murphy took over as interim city manager. Following a previous national search with a consulting firm, Richardson began his tenure in May 2019. Only five city managers served between 1924 and 2010.

“The instability has snowballed to where instability breeds more instability, making it harder to recruit candidates and keep high-quality city staff members who are dedicated to the community,” Payne previously told Charlottesville Tomorrow. “It has unquestionably put the city in a bad position where city government isn’t able to be as effective as it needs to be because of the number of vacancies.”

The current halt in the city’s search for a new manager, according to Councilors Lloyd Snook and Heather Hill, along with Payne and Magill, is in part due to feedback from the consultant hired to take point on the search.

Mayor Nikuyah Walker — who does not generally speak with members of local press and who could not be reached by the time of this publication — noted in a comment on Facebook that the consultant was “dismissive of so many factors that we claim are important to us.” 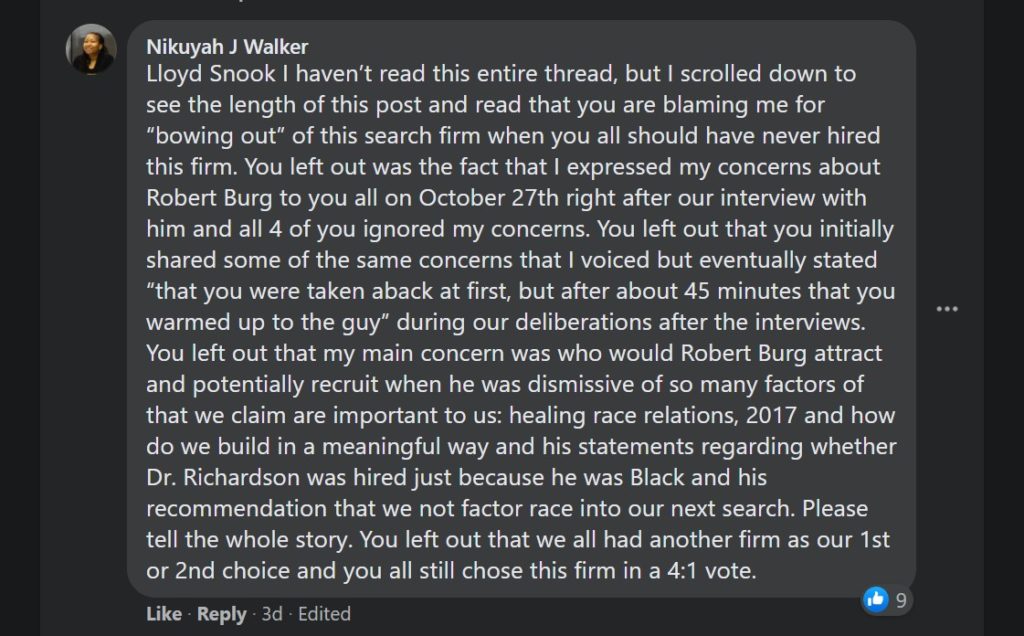 Those include healing race relations, the impact the Unite the Right rally, along with an alleged statement from the consultant that Richardson was hired because he is Black and that race of the next city manager not factor into the search.

Walker also wrote that Snook had initially shared similar concerns before “warming up to the guy.”

“Please tell the whole story,” she said to Snook in the social media post.

Ahead of the first closed meeting, Snook had posted to Facebook claiming Walker was in-part responsible for the feedback from the consultant and that a search for a new one should not resume until after the election where her seat is one of two that are up for election.

While the current search for a new city manager is on hold, not all of the $42,500 contract to Ralph Andersen & Associates has been paid. Wheeler said that so far, an invoice of $5,000 has been processed for services so far and that currently the procurement staff has not been notified to cancel the recruiting contract.

Councilors have spoken to Charlottesville Tomorrow in agreement that they need to seek “clarity” of expectations and boundaries between themselves and city staff as part of their efforts to “stabilize” local government. Other work will include filling key vacancies and establishing a strategic plan.

“The city manager and staff will need a clear understanding of exactly where the council’s policy priorities and goals are at,” Payne explained. “Until that’s communicated in a clear plan, it’s difficult for staff or a city manager. Otherwise, they are trying to work to implement goals with uncertainty.”