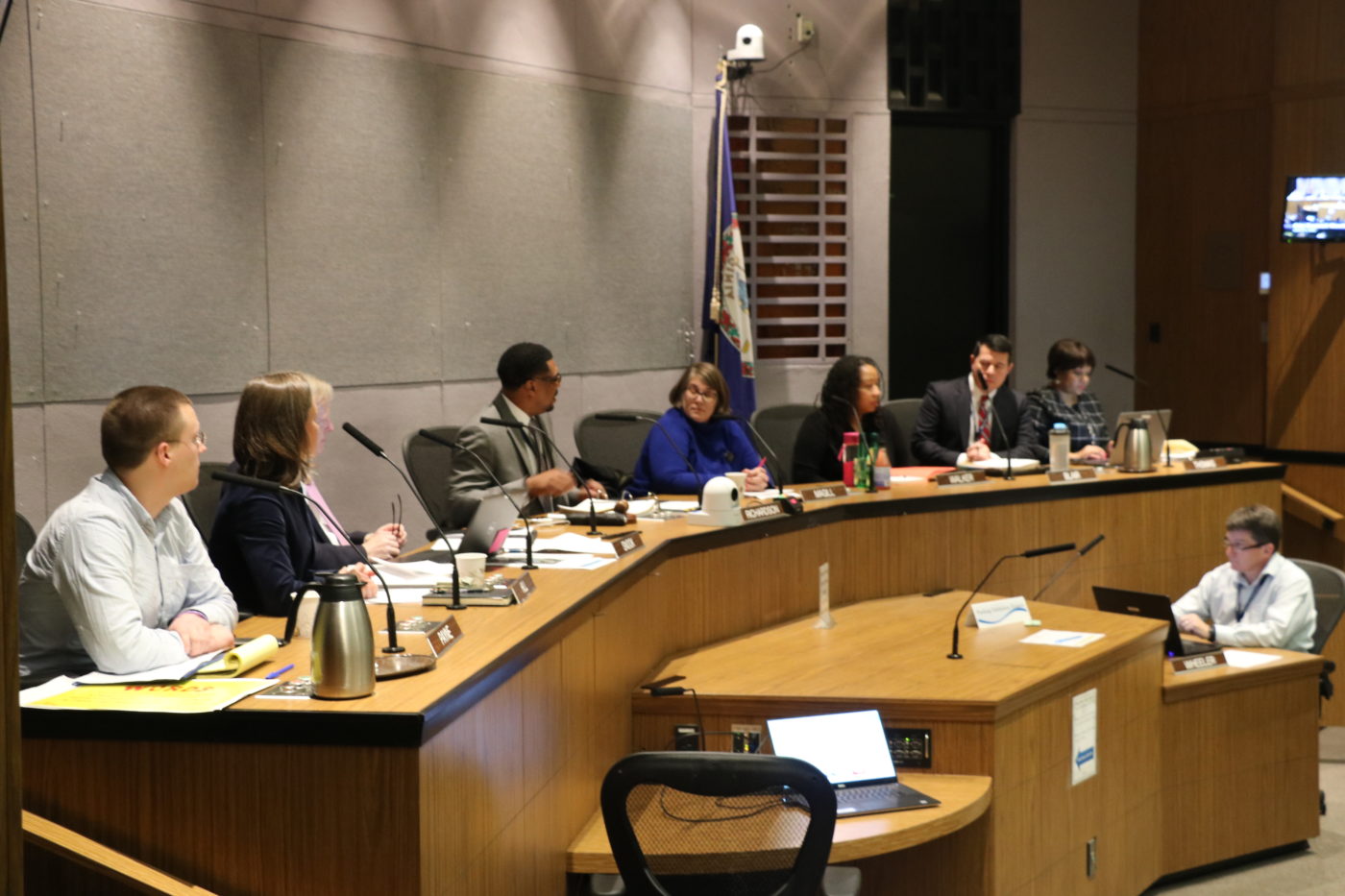 Charlottesville city councilors are moderated by City Manager Tarron Richardson as they select a Mayor and Vice Mayor from among themselves in Jan. 2020.

Editor’s Note: Updated Jan. 7, 2021 at 4 p.m. This article has been updated to include new information. Deputy City Manager Letitia Shelton has resigned. A city spokesperson also confirmed that an invoice of $5,000 has been processed for consultant services thus far, and procurement staff has not yet been notified to cancel the recruiting contract.

Despite a push to find a new city manager, members of the Charlottesville City Council now say the city government itself needs to be bolstered first.

The revelations came during a closed-door meeting stretching over four hours in which councilors later told Charlottesville Tomorrow they discussed strategies to “stabilize” the City Council and city staff operations. Interim city manager John Blair declined to comment on record.

“The reality is, the city is in a moment of leadership crisis. There’s been a number of exodus from the organization,” Councilor Michael Payne said Wednesday while the council was on a break from its closed meeting. “Obviously, you’ve had senior leadership team members who have announced their departures. There’s a number of vacancies for department heads that are still vacant.”

Earlier in the week, City Council once again halted its city manager search after internal strife spilled into social media.

Last month, the city signed a $42,500 contract with California-based consulting firm Ralph Andersen & Associates to spearhead the search for a new city manager, but by Monday, The Daily Progress reported that council had decided to push pause on the endeavor.

According to the article, Police Chief RaShall Brackney had expressed, in a Dec. 4 email that had been obtained through a Freedom of Information Act request, criticism of the consultant who had interviewed her.

Later, Councilor Lloyd Snook posted to his official Facebook page that the reporting was “misleading.” General City Council dysfunction and statements from Mayor Nikuyah Walker were why the consultant stated the city would have trouble attracting a candidate — and, consequently, why the council is suspending the search, he said.

Snook claimed that the mayor said in an email that she would not meet with the consultant without the other councilors present.

Walker did not respond to Charlottesville Tomorrow’s request for comment Wednesday afternoon, and a copy of that email could not be obtained by publication as of late Wednesday night.

“I had read the contents of that email to the recruiter. He paused and said, ‘Well I have worked with some pretty badly divided councils before, but I’ve never seen a level of dysfunction this profound,’” Snook said.

The mayor, who is the only Black member of the council, wrote in a recent Facebook post that she is “tired of my white colleagues placing the blame for everything that goes wrong at my feet and using their fragility to excuse their cunning behavior and the cunning behavior of some staff and community members.”

She added how the divisive rhetoric in city government affects community members.

“It’s also pathetic that the Black community is either warring on behalf of white people or quietly standing on the sidelines with the hopes that they [are] allowed to maintain their positions in the community.”

Payne said a core choice in pushing pause on the search for a city manager stems from feedback by Andersen & Associates.

That feedback indicated that the relationship between the council and city staff, along with key vacancies, suggest Charlottesville is “not going to be able to attract a high-quality city manager candidate until the organization is stabilized and candidates that come into this position would feel more secure in their ability to lead the city,” Payne said.

Calling the feedback a “wakeup call,” Payne noted the variables creating the current “instability” include staff vacancies in City Hall, along with the latest bout of council infighting.

“The instability has snowballed to where instability breeds more instability, making it harder to recruit candidates and keep high-quality city staff members who are dedicated to the community,” Payne said. “It has unquestionably put the city in a bad position where city government isn’t able to be as effective as it needs to be because of the number of vacancies.”

As for the council’s role in the instability of the city, Payne said it must craft clearly agreed upon expectations and boundaries between its relationship amongst itself and its relationship with city staff.

In 2018, Sidney, C. Zemp was chosen to be the interim city manager before declining the job due to “serious ethical shortcomings” — some of which included social media posts made by Walker that explained she did not like how Zemp had been selected.

The previous city manager, Tarron Richardson, in early 2020 also asked the City Council to “allow me to do my job for once instead of meddling in my day-to-day operations. I have asked for you to stop this in the past,” The Daily Progress reported.

City Attorney John Blair currently presides as an interim manager. He is the third person in the position in a permanent or interim role since 2018. Following 2017’s deadly Unite the Right rally, where white supremacists and neo-Nazis descended upon Charlottesville, the contract for Maurice Jones, who was hired in 2010, was not renewed and Mike Murphy took over as interim City Manager. Following a previous national search with a consulting firm, Richardson began his tenure in May 2019 and resigned September 2020. Only five city managers served between 1924 and 2010.

More recently, a position was also offered for the director of neighborhood development services to Parag Agrawal before he reneged his acceptance and took a position in Prince WIlliam County instead. Under Richardson’s organizational plan, the current director, Alex Ikefuna, will be demoted to deputy director of zoning once this hire is made. And Paul Oberdorfer served as an assistant city manager for a little more than a year before tendering his resignation to become a city manager in Ohio.

As of Thursday, Deputy City Manager Letitia Shelton, who was brought on by Richardson, has resigned. Her final day will be Feb. 19.

Payne said the council must figure out its role in staff turnover.

Councilor Heather Hill explained that the consulting firm had recommended stabilizing things would be helpful before “going out on a national search.”

In the meantime, Payne and Hill say a way to rebuild the city’s foundation is to fill key vacancies. Payne also noted that while the city manager search is on pause, less key vacancies can help attract the next city manager.

According to city spokesperson Brian Wheeler, vacancies in significant roles include:

New positions that have yet to be filled include:

A list for other vacant positions that the city plans to hire for can be found here. At the time of this article’s publication, there are 19 positions available including transit operators, technicians and a police recruit.

He and Hill note the impact the COVID-19 pandemic has had on operations and the budget as an additional challenge, with Payne adding that the three councilors who started their tenure at the beginning of the year have not been able to fully dig into the policies they ran on and care about for the community.

Meanwhile, Snook said that council’s dialogues Wednesday are not quite complete.

“We will have another meeting in the next couple of days and kind of take it from there,” he explained.

He added that the meeting, like today’s would be classified as an emergency meeting and, due to that status, they don’t need to be announced as in advance as other types of meetings.

“I hope we will have more clarity. It’s just not happening today,” Hill explained Wednesday evening following the closed meeting.  “All I can say is that we are just working through different avenues that could be most successful for bringing that stability that we are all striving to achieve.”

Magill noted that despite not always agreeing, each council member’s passion for the city is where they find common ground.

While the current search for a new City Manager is on hold, not all of the $42,500 contract to Ralph Andersen & Associates has been paid. Wheeler said that so far, an invoice of $5,000 dollars has been processed for services so far and that currently the procurement staff has not been notified to cancel the recruiting contract.

Charlottesville Tomorrow reached out to every council member and, as of the time of publication, did not receive a response from Mayor Walker.