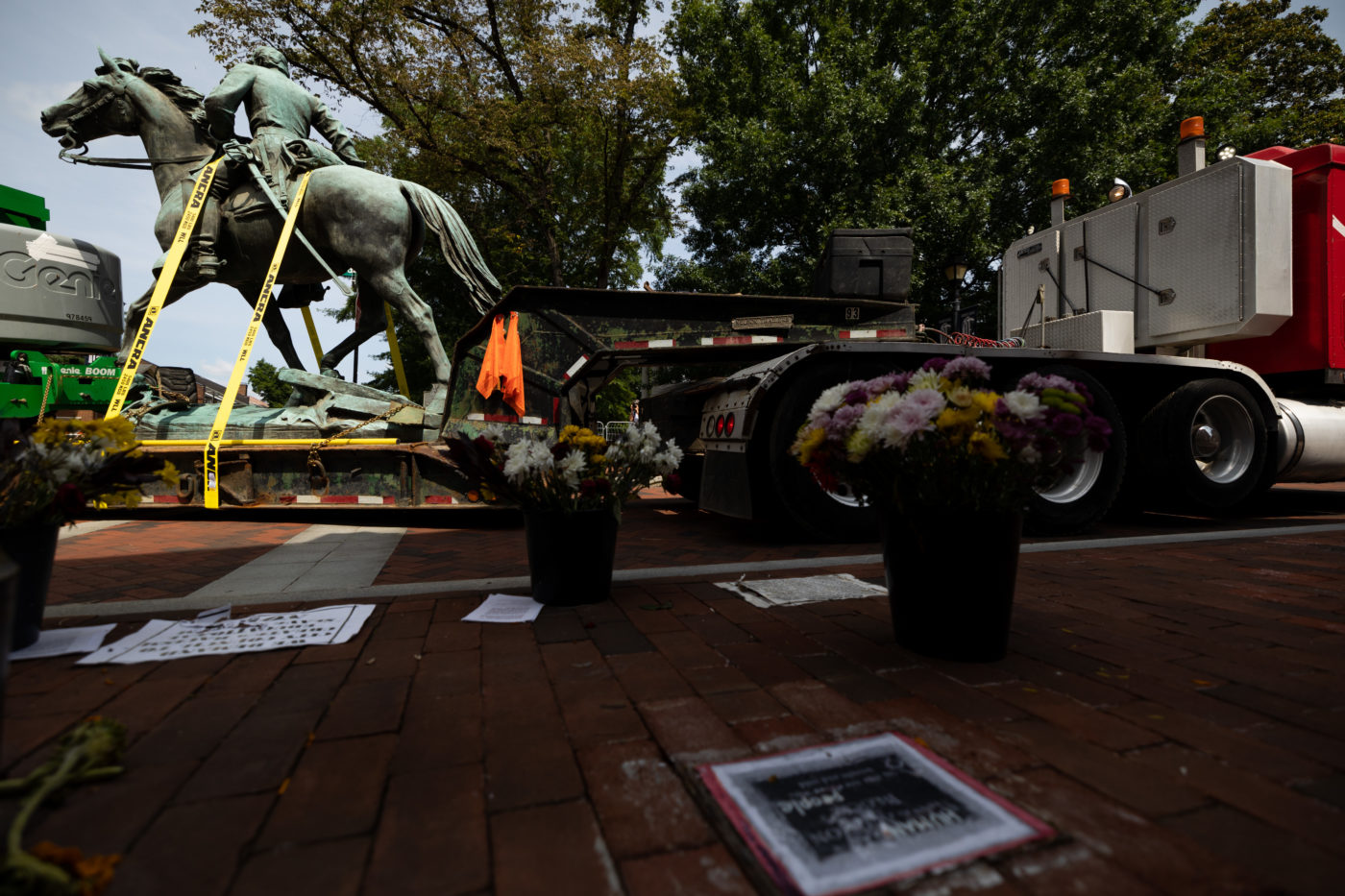 The statue of Confederate Gen. Thomas "Stonewall" Jackson heads down Park Street in downtown Charlottesville after being removed from its pedestal. The 100-year-old symbol has been moved into storage at an undisclosed location at least until the City Council decides its final fate.

Charlottesville City Councilors expect to discuss the fate of the city’s two removed Confederate monuments and the statue of Lewis, Clark and Sacagawea during Council’s Monday meeting.

According to the agenda posted Thursday, Council will have a first reading toward “approving the disposition of statues: Robert E. Lee, Thomas J. ‘Stonewall’ Jackson, and Sacajawea-Lewis-Clark ‘Their First View of the Pacific.’”

The conversation is slated to be the (likely lengthy) meeting’s penultimate discussion among Councilors before transitioning into the Matters by the Public segment.

Occasionally, councilors are able to take a vote during a first reading of an agenda action item, but whether or not they will be able to do so Monday is unclear. The City Manager’s Office and City Council did not immediately respond to an inquiry about that process.

A handful of groups have formally requested to take the statues. The Council must ultimately decide which organizations will receive them. It can also choose to keep them in storage.

Councilors did not immediately respond to Charlottesville Tomorrow’s request for comment.

For the Sacagawea statue there are six contenders.

Among the applicants are the Lewis & Clark Exploratory Center in Darden Towe Park, which sent its bid in July. A descendant of William Clark submitted an offer of $11,000 for the statue, plus all moving expenses, to relocate the statue to his family’s private estate. The Chamber of Commerce in Miles City, Montana, proposed paying $5,501 plus moving expenses to bring the statue, which the chamber says “fits very well with our history,” to “a location that Clark camped at in 1805,” as long as the city of Charlottesville could help them load it onto the truck.

The Mandan, Hidatsa and Arikara Nation in Forth Berthold, North Dakota, also applied. Tribe member Jerry Birdsbill Ford wrote to the city that Lewis and Clark visited the Nandans in the 1804-1806 period. “Sacagawea grew up here and we strongly believe she is a member of our Tribe,” Ford wrote. “She does have descendants living on Ft. Berthold at this time.”

There were initially seven offers for the statue, but one was rescinded in October. The small city of St. Charles, Missouri, made an offer citing the importance of the expedition to its city. However, a fundraiser hoping to raise $50,000 to pay for the acquisition and relocation of the statue had raised just $3,885 from 52 donors after a month and a half, the St. Louis Post-Dispatch reported, and the city’s mayor had promised that taxpayer dollars would not be used for this purpose. That, in combination with the controversy surrounding the statue, led St. Charles to withdraw its proposal.

Council has said that whomever they decide to give or sell the statue to must have a plan to recontextualize the it, which shows Sacagawea, a Shoshone woman, crouching — in what critics say is a subservient manner — behind Lewis and Clark.

The formal letter also required that the recipient provide “an accurate historical narrative of the positive role Sacajawea provided in the exploration efforts of the Lewis & Clark Expedition and include the concerns that the statue may be interpreted to depict a lesser and more subservient role provided by Sacajawea.”

Councilor Michael Payne previously told Charlottesville Tomorrow that “the driving factor for us is just ensuring that wherever it ends up is centering the narrative of the Indigenous community and including that in the reinterpretation.”

Initially, 33 individuals, groups, and organizations sent letters of interest to acquire the city’s Confederate statues. But, after the city issued its solicitation of offers for Lee and/or Jackson in September, just six entities submitted official offers and proposals by the Oct. 15 deadline.

Some of the offers, like the ones from LAXART in Los Angeles and a foundation that operates a museum on the ancestral grounds of Confederate General J.E.B. Stuart, were for both statues. Other offers, like the one from the Trans-Allegheny Lunatic Asylum, a historical site and haunted house in Stonewall Jackson’s childhood hometown, want Jackson only.

Just one of those six offers came from a local organization. The Jefferson School African American Heritage Center proposes melting down the Lee statue into bronze ingots (blocks) and then transforming the metal into another piece of artwork of the community’s choice, by an artist of the community’s choice. The “Swords Into Plowshares” proposal included letters of support from 28 community organizations, and others have expressed support for it since.

City councilors have repeatedly said that they do not want either statue to end up in a place where they would be venerated or used to celebrate the Confederacy.

Most councilors have not commented publicly on the contents of any of the official offers, though in a meeting last month, Mayor Nikuyah Walker said, “I definitely want to be able to support the Jefferson School’s request. And I’m concerned about the energy in the object. I’m struggling with that, but I would like to support the request if they think they can turn it into something that’s healing.”

Monday’s meeting marks the beginning of the final chapter in the city’s quest to remove its Confederate monuments.

After around four years of legal battles — and many more years of public conversation — Council voted July 7 to remove the three statues from public view and appropriated $1 million for the removal, covering, or storage of the statues. They acted quickly and quietly in the interest of community safety, Vice Mayor Sena Magill told Charlottesville Tomorrow at the time. Three days later, on July 10, a Saturday, a hired contractor removed the City’s Lee and Jackson statues, as well as the statue of Meriwether Lewis, William Clark, and Sacagawea.

The following day, on July 11, that contractor also removed another local monument to white supremacy — this one belonging to the University of Virginia — the violent “Conqueror of the Northwest” monument to George Rogers Clark that sat on a piece of UVA property at a major intersection on West Main Street. The university has not yet decided what to do with it, but they’ve been urged to consult with those Native American tribes affected by the statue and also Clark’s actions. There are many such tribes.

Since that weekend, the Lee and Jackson statues have been stored in an undisclosed location, while the Sacagawea/Lewis/Clark statue has been stored at the Lewis & Clark Exploratory Center in Darden Towe Park.

Register for the Monday, December 6 City Council meeting, to begin at 6:30pm, here.