City of Charlottesville is soliciting offers for Sacajawea statue 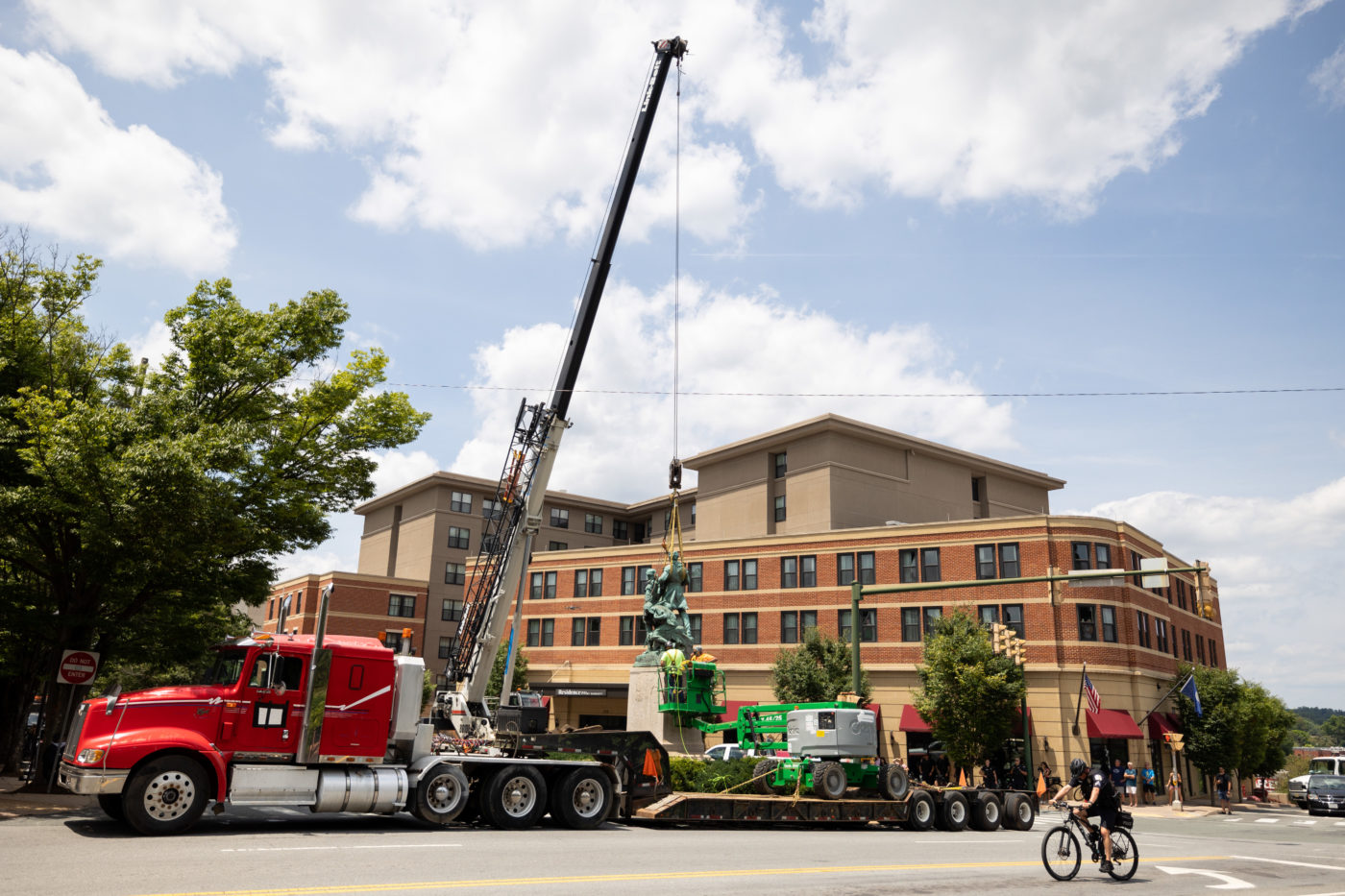 Shortly after the removal of nearby Confederate statues, Team Henry Enterprises LLC prepare the Sacajawea, Lewis, and Clark statue for removal and relocation

The city of Charlottesville on Monday announced it’s taking offers from individuals and groups interested in acquiring its Lewis and Clark and Sacajawea statue.

The offer window will remain open until Aug. 27.

“We’re doing it because we kind of have to,” said Charlottesville City Councilor Sena Magill. “There are procurement laws for cities, and the fact that this [statue] is owned by the city, we have to make sure we’re doing due diligence.”

Council members have previously expressed interest in giving the statue to the Lewis & Clark Exploratory Center in Darden Towe Park — where it is currently being stored.

The center submitted a formal proposal to the council on July 6, outlining its plan to recontextualize the statue.

“We would contrast her crouching position with the heroic-style postures of the male explorers, and we would also allow for examination of her depictions within the frieze, where she is pictured standing alongside others of the Expedition,” the proposal said.

In creating an exhibit around the statue, the center intends to work with members of the Shoshone Nation, the University of Virginia Native American Student Alliance and other indigenous artists.

“I think there is still definitely interest in the Center,” said Councilor Michael Payne. “They’ve been very clear about their intention to have it be driven by the indigenous community and have that frame the narrative.”

However, Payne added that the council wants to know all the options before selecting the statue’s future home.

At least 10 other people and groups have already expressed interest in taking the statue.

The mayor of a small city in Missouri called St. Charles is one. Dan Borgmeyer wrote to Charlottesville City Manager Chip Boyles saying he was “VERY interested” in the statue.

“We are a VERY historic city just west (across the Missouri River from St. Louis) and the actual starting point of the Lewis & Clark westward Expedition,” Borgmeyer said.

Another offer came from the Miles City Chamber of Commerce in Montana.

“As you know Lewis and Clark history is a big part of Montana history,” the chamber wrote in an email to the city.

A third offer came from the Mandan, Hidatsa and Arikara Nation in Fort Berthold, North Dakota.

“Lewis and Clark visited the Nandans in the 1804-06 period,” tribe member Jerry Birdsbill Ford wrote to the city. “Sacagawea grew up here and we strongly believe that she is a member of our Tribe. She does have descendants living on Ft. Berthold at this time.”

Whomever the City Council decides to give the statue to, they must have a plan to recontextualize the statue, which shows the indigenous woman crouching behind explorers Meriweather Lewis and William Clark in a manner some have called subservient.

The city’s formal solicitations of offers letter further requires that a recipient must provide “an accurate historical narrative of the positive role Sacajawea provided in the exploration efforts of the Lewis & Clark Expedition and include the concerns that the statue may be interpreted to depict a lesser and more subservient role provided by Sacajawea.”

“The driving factor for us,” Payne said, “is just ensuring that wherever it ends up is centering the narrative of the indigenous community and including that in the re-interpretation.”