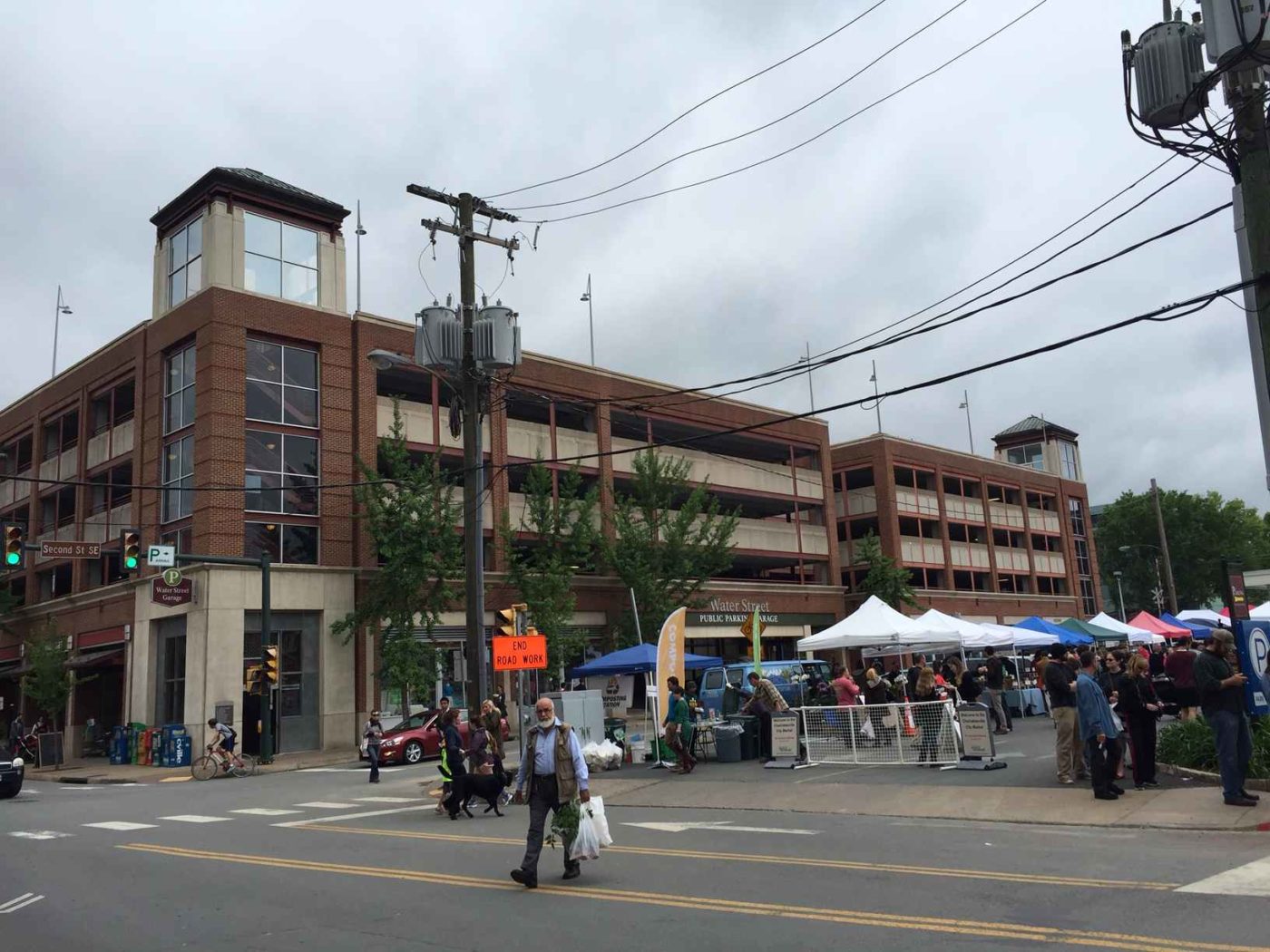 Water Street Parking Garage on April 30, 2016 during the City Market

The city of Charlottesville has filed a countersuit against the Charlottesville Parking Center, claiming the private company breached a contract when it purchased 106 spaces in the Water Street Parking Garage last October.

The operations of the garage are governed by a condominium declaration signed in 1994 and amended in 2002.

“In or about October 2015, Wells Fargo & Company … sold all of its parking units to CPC without first offering the city the opportunity to purchase any of those parking units,” reads a pleading filed in Charlottesville Circuit Court on Friday.

The countersuit was filed several weeks after the CPC sued the city, claiming the city has kept rates at the Water Street Parking Garage below market rate. The city has hired the law firm of LeClair Ryan to represent it in the case.

Wells Fargo is not named as a party to the lawsuit.

City spokeswoman Miriam Dickler declined to comment on the countersuit, as did CPC owner Mark Brown. Brown purchased the company in August 2014 for $13.8 million.

The CPC owns the land on which the parking garage was built, but until October the company only had two seats on the eight-member Board of Directors of the association that governs its operations. The condominium declaration established that at least six votes are required for a majority.

After the Wells Fargo sale, CPC claimed a third seat on the Board of Directors that makes policy decisions and establishes a budget for the garage. Since then, the association’s board has not adopted a budget and has not met since December.

Brown warned in an April 6 letter to the association that he will “pursue all available remedies” to resolve the dispute.

The countersuit asks that the city be allowed to purchase a share of the Wells Fargo spaces at the same price paid by CPC in October because the city should have had the right of first refusal.

Officials with Wells Fargo declined to comment for this story.

In all, the city seeks judgment on five counts, including business conspiracy.

“CPC acted in concert with and conspired with Wells Fargo by improper means to interfere intentionally with the city’s contractual rights for the express purpose of usurping those rights for itself to the intended detriment of the city,” reads the pleading.

The suit states the city was interested in buying the spaces and CPC knowingly broke the agreement.

“CPC’s conduct described above was knowing and willful with the express intent to harm the city by intentionally depriving the city of all its legal rights,” reads the countersuit.

The city wants a jury to consider several remedies, including dismissal of the CPC’s suit and hundreds of thousands of dollars in punitive damages.

A day before the countersuit was filed, Brown sent a letter to the City Council asking it to sell the city’s remaining interests in the parking garage.

A Charlottesville-based attorney who is not involved in the case said a resolution could be many months away given that both sides have asked for a jury trial.

“I expect there will be expert testimony regarding value, which means extensive discovery and depositions prior to trial, as well as several days of trial,” said Pete Caramanis of the firm Royer, Caramanis & McDonough.

The Charlottesville Parking Center was formed in 1959 to provide “adequate and reasonable parking for downtown Charlottesville” according to the company’s website. In addition to running the Water Street garage, the company currently is under contract to manage the Market Street Parking Garage, as well as a surface lot at Seventh and Market streets.

Brown’s purchase of CPC changed the dynamic of a public-private partnership that had been set up to build and manage the facility.

“It seems that these differing motivations and perspectives between CPC and the city should have been foreseeable, and it’s unfortunate that their agreement seemingly did not provide for a process to resolve this type of dispute,” Caramanis said.