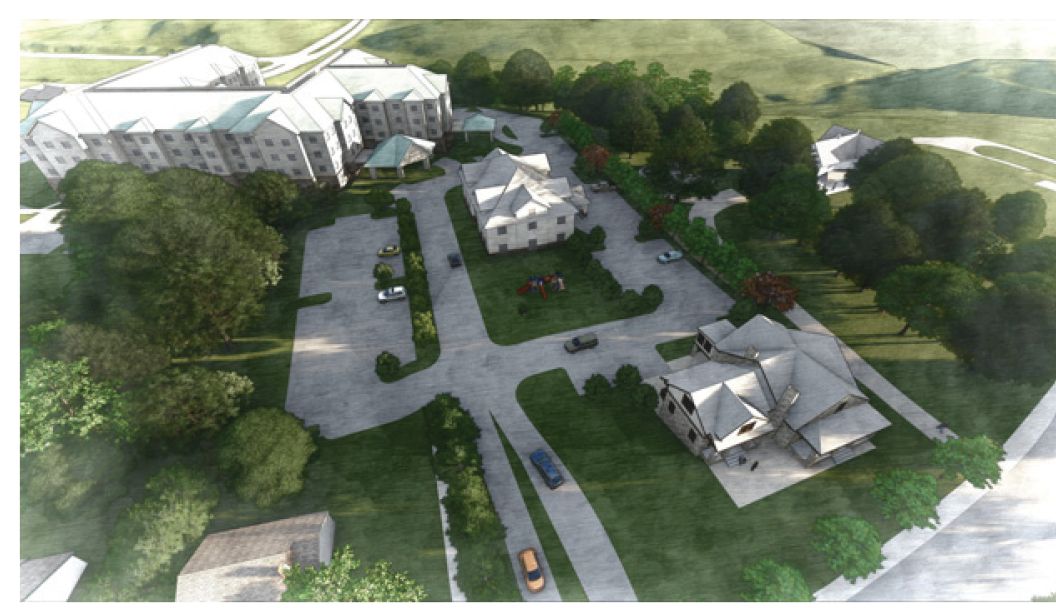 Rendering of intergenerational campus at MACAA

Several members of the Charlottesville Planning Commission expressed concerns Tuesday that a proposed senior living facility at the site of a long-standing nonprofit group might be too large in scale.

“We’re talking about a five-story building going into a residential neighborhood,” Commissioner John Santoski said. “Is this what we want to do in that neighborhood?”

The Monticello Area Community Action Agency and Roanoke-based New Millennium Senior Living Communities are seeking a rezoning of three properties on Park Street from single-family residential to planned unit development zoning, which can allow for commercial and residential uses.

The project would include 150 senior living units inside of a five-story building that would be built where MACAA currently operates. The poverty-fighting nonprofit would move into the historic Stone House that would be renovated for office use.

The formal public hearing had been scheduled for Tuesday but was postponed until September due to an advertising error.

“We’re hopeful the feedback you give to them this evening will help them shape their project,” said Missy Creasy, the city’s planning manager.

Charlottesville’s Comprehensive Plan calls for low-density residential at the property, which means as many as 15 dwelling units per acre. The senior living building would be at a density of 16 units per acre, just outside the range.

City Planner Heather Newmyer said the project would help meet the city’s need for facilities to serve an aging population. However, she said she could not recommend the rezoning as currently proposed because of several concerns, including the density, mass and scaling.

At least one commissioner was concerned that the applicants are seeking the PUD rezoning, which allows for a site-specific zoning district to be created. That approach has been used for several projects across the city, including the controversial William Taylor Plaza.

“A lot of people know I’m not a fan of the PUD because a lot of developers have done an end-run around them,” Santoski said. “I want to make sure there isn’t something buried in here that someone else could do [something different.]”

Newmyer said only a senior living facility could be built under the existing proposal.

Kurt Wassenaar, the architect for the project, said staff has been very clear about trying to make sure the project conforms to city rules. He noted that the application had twice been rejected by staff because it was incomplete.

“There has been a very diligent effort by staff to pin us down,” Wassenaar said. “MACAA was very specific that they have been in this community for 50 years. They’re facing some very serious financial problems and we were engaged to explore what they could do with the one asset they have to ensure their future.”

The proposal is billed as an “intergenerational campus” that would allow for seniors to interact with young children in MACAA’s Head Start program.

“Our challenge is always getting kids to the building,” said Bruce Hedrick, of New Millennium. “Imagine the possibilities if they can walk from next door.”

Hedrick said the average age of residents in his company’s facilities is in the low to mid-80s. He said the average monthly rent would be between $3,500 and $4,200 a month, including meals, housekeeping and transportation. In response to questions from commissioners, he said Medicaid is not accepted, meaning low-income seniors likely would not be able to afford to live there.

About a dozen people, opponents and supporters, spoke during the informal public hearing.

One woman said the facility might allow more people to retire within city limits rather than moving to facilities in Albemarle County, such as Westminster-Canterbury of the Blue Ridge.

“I’ve been screaming for years about the lack of independent senior living in the city,” said Sue Lewis. I have so many friends who have left the city reluctantly because they couldn’t find anything like it.”

But others were concerned about the size of the structure.

“We hope that Mr. Wassenaar would consider a reduced size that would not overwhelm the neighborhood,” said Jean Hiatt, of Preservation Piedmont.

Several residents said the additional traffic generated by the facility would overwhelm an already overburdened street.

“I am not exaggerating when I say that people are going over 50 miles an hour, including huge trucks that are not allowed to go on the John Warner Parkway,” said Kathleen Free, who lives on Park Street. “I don’t know what adding another traffic situation is going to do to that.”

“Everybody wants MACAA to succeed,” said Phil Schrodt, who lives on nearby Wilder Drive. “The issue is whether we can have that success without changing the neighborhood. We’re a residential, mature neighborhood and an excellent area for residential development. Let’s have MACAA succeed without a five-story building that’s going to be sitting there forever.”

Commissioner Jody Lahendro said he could support the project. He said the scale of the building would be most visible from the U.S. 250 Bypass and not Park Street.

“I would expect large buildings along a road like that,” Lahendro said, pointing out the Covenant School visible near the John W. Warner Parkway interchange. “I’m also giving in to the need for the city to grow.”

Other commissioners were concerned there would be no units that would be considered affordable under the city’s guidelines.

“We need affordable housing for everyone,” said Commissioner Lisa Green.

Lahendro said development of single-family homes by-right on the site would not be affordable, either.

Santoski said the city could work with MACAA to purchase the site to build affordable housing units.

“Here’s a perfect opportunity for the city to meet one of its goals,” Santoski said.

Commissioner Genevieve Keller said she was skeptical of the proposal and thought it should have come through one of the existing zoning categories rather than the PUD. She also saw nothing special about the senior living home.

“We’ve got a chain store nursery home here,” Keller said. “I’m sure there are innovative models for the elderly but I’m not seeing that here.”

The item is scheduled to come back to the commission at its meeting Sept. 12.

Commissioner Taneia Dowell recused herself from the discussion because she is employed by MACAA. Commissioner Corey Clayborne was not present at Tuesday’s meeting.