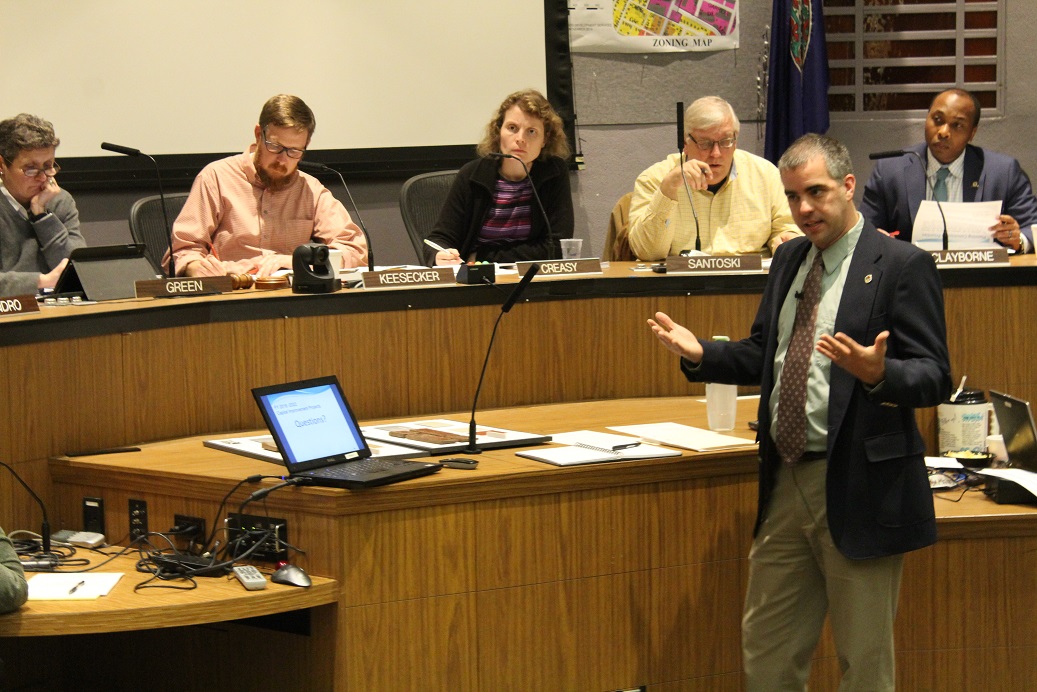 Ryan Davidson, Senior Budget and Management Analyst for the City of Charlottesville, gave a presentation on next year's capital improvement program at Tuesday's meeting of the City Planning Commission.

The Charlottesville Planning Commission has recommended that the City Council increase funding for tree preservation and planting by $75,000. The action came Tuesday during the commission’s review of the capital improvement program for fiscal year 2018.

The draft budget reserves $50,000 for urban tree initiatives. Planning Commissioner Jody Lahendro said this amount would not cover the cost of pruning and maintaining city-owned trees, nor would it allow for the planting of any new trees next year.

“The city’s tree canopy will continue to decline, along with the health and potential benefits it offers to our community,” said Lahendro, who also serves on Charlottesville’s Tree Commission.

An Urban Tree Canopy Assessment released in 2015 estimated that Charlottesville’s tree canopy declined by 6.2 percent — approximately 420 acres — between 2005 and 2014.

Lahendro said the city’s parks and recreation department needs at least $75,000 in capital improvement funding to preserve the city’s existing tree canopy in the upcoming fiscal year. The Tree Commission recommended a total of $125,000, which also would support the planting and maintenance of 200 new trees.

Lahendro said that many Charlottesville tree plantings in recent years were part of highway construction projects funded by the Virginia Department of Transportation. “Those projects are over, and the funding is gone,” he said.

The Planning Commission did not specify where the additional $75,000 for trees would come from. Commissioner Lisa Green said she was reluctant to take away money from other capital improvement requests, particularly the city’s contribution to the Charlottesville Affordable Housing Fund.

“While I love trees as much as the next person, I have a hard time with that,” said Green. “I’m not sure how we say … trees are more important than affordable housing.”

The commission’s recommendations to the council passed on a 5-0 vote. Commissioners Taneia Dowell and Genevieve Keller were absent.

Charlottesville’s capital improvement program for FY2016 projected only $25,000 in annual expenditures for tree preservation and planting through 2020. That figure was raised to $50,000 for the current fiscal year.

“We felt that it was important enough to give some additional funding,” said Ryan Davidson, the city’s senior budget and management analyst.

Davidson said his office must balance the Tree Commission’s recommendation with many other capital improvement requests. The current capital improvement program lists more than $79.8 million in unfunded projects through FY2021. “Based on all the other needs we had, we weren’t sure we could bring it all the way to what was being requested,” Davidson said.

Green and Commissioner John Santoski suggested that maintenance costs for the city’s trees should be classified as an operational expense for the parks department and separated from its annual capital improvement requests.

“The CIP … is basically supposed to be for one-time expenses,” Santoski said. “We are giving the impression that we are spending $50,000 to plant trees every year.”

Additionally, some of the $125,000 requested for tree preservation would fund expensive treatments for ailing trees on the Downtown Mall. In an interview, Lahendro said this proactive maintenance represented a “gray area” between operational expenses and capital improvements. “It’s sort of like renovating a building,” he said.

Lahendro said the parks department hopes to continue planting native trees along Charlottesville’s entrance corridors and sidewalks next year. It is also in negotiations to plant trees on property owned by the Charlottesville Redevelopment & Housing Authority.