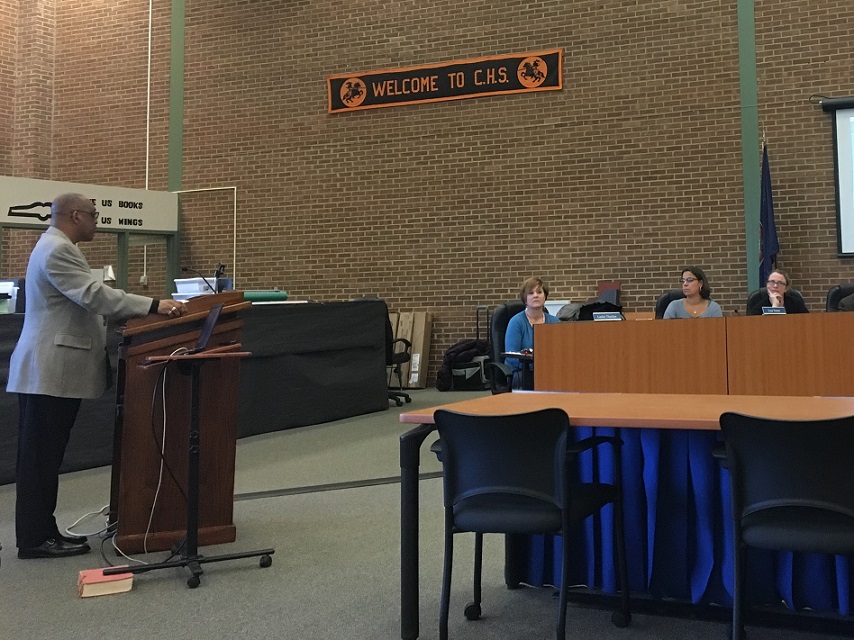 James Bryant was one of 11 applicants for an interim appointment to the Charlottesville School Board who spoke at a March 26 public hearing.

Next week, the Charlottesville School Board will appoint a new member who will serve until a special election to fill a vacancy is held on Election Day.

Former School Board member Adam Hastings moved to Albemarle County with his family on March 3, immediately ending his eligibility to serve.  Hastings was elected in November 2015.

The School Board will hold a meeting to discuss the qualifications of applicants for the interim position and make an appointment by a public vote at 4 p.m. April 11 at the Charlottesville Albemarle Technical Education Center.

The School Board’s interim appointment will also be allowed to campaign for election to their seat. The winner of the Nov. 6 special election would be sworn in immediately. Their seat will be up for election again in November 2019.

Eleven people submitted applications for appointment to the School Board and spoke at a public hearing on March 26.

James Bryant is a retired teacher and school counselor who last worked at Charlottesville High School. He is a member of Charlottesville’s 10th and Page Community Development Block Grant Street Task Force.

Bryant said he was interested in creating an initiative to improve early childhood education in Charlottesville “… to put all students on a level playing field.”

“I want to ensure that all students have academic scholarship and rigor,” he said.

Lashundra Bryson Morsberger is a human resources specialist for the National Park Service. Her daughter started Kindergarten in Charlottesville this year.

“I want to be an advocate for all those children who might be falling into the achievement gap,” Morsberger said. “I am a passionate person. I honestly care about every kid.”

Morsberger said she would like to streamline the division’s delivery of information to parents and enhance security infrastructure at Charlottesville’s schools.

Selena Cozart is a senior facilitator at the Institute for Environmental Negotiation at the University of Virginia. She previously was an educational evaluation consultant for Charlottesville City Schools and an assistant professor at the Curry School of Education.

Cozart said the experience of running a community center at Friendship Court taught her how to engage stakeholders.

“I want to encourage and involve parents who haven’t always experienced success, or a connection to school settings,” Cozart said.

Emily Dooley is a Realtor for Nest Realty and former principal of Nathanael Greene Primary School in Greene County. She previously worked as a testing coordinator at Monticello High School in Albemarle County and as an assistant principal at Locust Grove Middle School in Orange County.

“I have a deep understanding of what it means to be a teacher and a school leader in a public school system,” Dooley said.

Brian Dublirer is a retired school counselor who worked at Clark Elementary School for most of his career.

Dublirer said he would like to raise the salaries of Charlottesville’s longest-tenured teachers. He said schools should focus on helping students build relationships with their teachers, their fellow students, and their community.

“I want the School Board to communicate somehow that the purpose of schools is to create capable citizens. I don’t think capable citizens can be measured solely by test scores,” he said.

Jessie Audette Muniz is senior director of project development at Apex Clean Energy. She serves on the board of the Interwest Energy Alliance, which advocates for the expansion of clean energy in six Western states.

Muniz said she would like to achieve greater diversity among Charlottesville’s teacher corps and expand the division’s CLASS after-school program.

“My son is enrolled in that program. When I enrolled him I found out that the waiting list had at least 90 students, and I was very concerned,” she said.

Prousalis said her background in economics and finance would prove useful when making policy decisions.  “I want to optimize the resources we have to make sure students are getting the most out of school,” she said.

Santoski said he was interested in expanding vocational training opportunities in Charlottesville’s schools and at CATEC.

“We are surrounded by the University of Virginia and we have such a strong desire to see all of our students move on to advanced education,” he said. “But we have to remember that we also need plumbers, computer technicians and mechanics.”

Jennifer Slack is the founder and CEO of Our Neighborhood Child Development Center, a preschool located on Ivy Road.

Slack said she believed School Board members should collaborate with members of the community to achieve a shared vision for education, instead of pushing for a personal agenda.

Tennant moved to Charlottesville with his family last summer, just before hundreds of white supremacists rallied on UVa’s Grounds and in downtown Charlottesville.

“This congregation looked to me and asked me to respond to what was happening in our community,” Tennant said. “I thought [joining the School Board] was an excellent opportunity to continue to have that kind of engagement with our community.”

Joe Thomas is programming director for Monticello Media and a morning talk radio host on WCHV. He is a member of the CATEC Culinary Advisory Board.

Thomas said he wanted to decrease the emphasis on testing in schools, and to ensure that teachers received adequate resources to do their jobs.

“It always breaks my heart when I get the list of things teachers need us to send in with our kids for the new year,” Thomas said.  “I want to make sure teachers are first in line for the resources of the school division, because they are the most important people out there.”