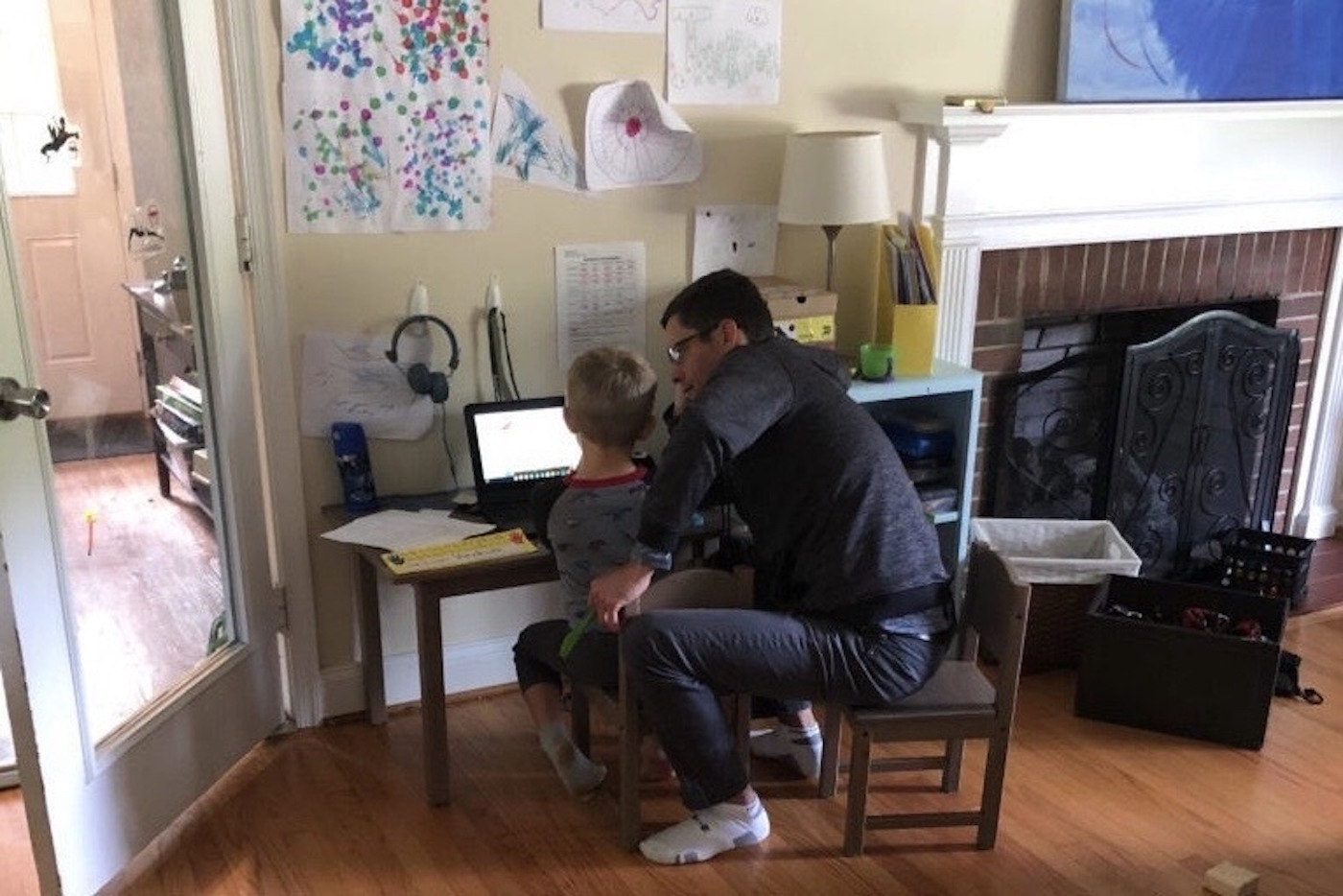 Jason Vandever helps his son with his virtual school in September 2020.

During the day, Hiller teaches U.S. history and Advanced Placement psychology in person at Charlottesville High School. Her work continues once she gets home and begins her online U.S. history class, which she teaches for seventh graders at Buford Middle School.

Hiller’s workload will dwindle in the upcoming school year. The history class she teaches will no longer be offered by Charlottesville City Schools.

The district is ending its virtual learning program, CCS Virtual.

More and more Charlottesville students, officials say, are moving back to the classroom making the need for CCS Virtual nearly obsolete.

As of May, only 67 students were enrolled in CCS Virtual, Katina Otey, the district’s chief academic officer, said. Almost a third of those students are currently in fifth grade. The number of students interested in continuing online next year is lower still — only 15.

“We know so much more about COVID and about how it spreads and how we can take care of ourselves,” said Paula Culver-Dickinson, the district’s digital knowledge and professional learning coordinator. “We believe we can bring everyone back safely.”

The suspension of CCS Virtual marks a quiet end to what started as a crucial program. Charlottesville schools abruptly shifted the entire district to virtual learning in March 2020, shortly after COVID-19 began to spread through the community. At the time, it was unclear how long the district would remain virtual.

As weeks gave way to months, parents grew increasingly concerned that their children were not getting an adequate education through online schooling. At the same time, other parents preferred the virtual instruction, fearing that meeting in person would expose the students to the virus.

City Schools remained entirely virtual until March 2021, when officials announced they would begin bringing students back into the schools. At the time, though, children aged five to 11 were not authorized to get a vaccine — that authorization came in early November. Many parents remained reluctant to send their kids into the classroom.

So, at the start of the 2021-2022 school year, the district announced that it would open schools to in person learning, but continue offering a virtual option. That program was named CCS Virtual.

During the last school year, Charlottesville schools spent $61,000 in American Rescue Plan Act funds on stipends for teachers teaching virtually. The funds are expected to expire in December of this year due to the fund’s spend-down, essentially expiration, date.

What CCS Virtual looks like for each school and grade varies. For instance, students in grades three through five meet synchronously — in real time — with a teacher. Students in middle school grades, especially sixth, are taught a portion of their core content asynchronously, like Hiller’s class, and use Canvas, an online learning platform, to review coursework and submit assignments.

There are still options for online public schooling. Any families who wish their children remain virtual can enroll in a state-run online school called Virtual Virginia, the district said. The online platform is the official online program of the Virginia Department of Education, and it’s open to Virginia public school students in grades kindergarten through 12.

Virtual students who are behind in their classwork will not have to repeat a year, but may have to enroll in summer school or additional help to be up to speed with their in-person classmates, Otey said.