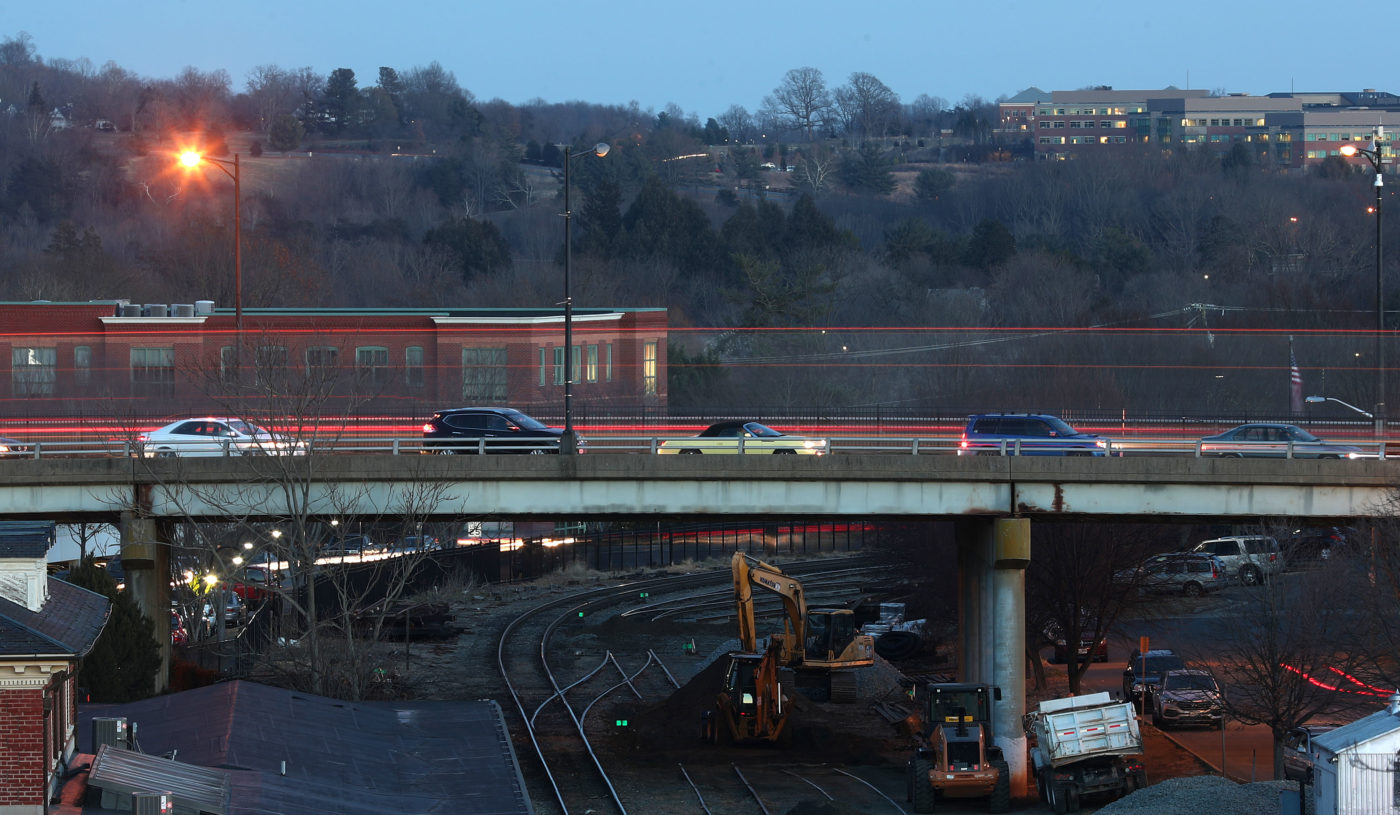 Cars travel across the Belmont Bridge in mid-December

Charlottesville officials have signed a contract with a Richmond-based firm to produce construction documents for a Belmont Bridge replacement by the end of March 2018.

The scope of work outlined in the contract with Kimley-Horn covers 19 tasks, including traffic-engineering and analysis; roadway design; and coordination with the railroad over which the bridge will cross.

In all, Kimley-Horn will be paid $1.98 million to create an urban design plan for not only the bridge but for the roads and sidewalks that connect with it.

“The project includes ancillary roadway improvements to both the north and south bridge approaches, including accommodations and maintenance of pedestrian traffic through the existing pedestrian tunnel,” reads a description of the work to be performed.

The city advertised the project in November 2015. Kimley-Horn was the top pick of a Belmont Bridge subcommittee but negotiations were held over several months over the scope of work and the fee.

The firm MMM Design had been hired in 2009 to design a bridge but went out of business soon after the City Council in July 2014 reaffirmed a decision to replace the structure rather than tunnel underneath the railroad tracks.

The Virginia Department of Transportation classifies Route 20, the road over the bridge, as an urban minor arterial, and the scope of work states that the bridge will be designed for a 25-mph speed limit.

MMM Design had come up with a plan to reduce the bridge from its existing 440 feet length to a shorter one of 210 feet. However, Kimley-Horn’s scope of work does not specify a length.

“The bridge length is equal to or less than that of the existing Belmont Bridge,” the document states.

The request for proposals had specified a design that had “two lanes — one in each direction.”

However, the scope of work does not include that requirement.

“At this point, I will let the lanes be determined by the design process,” said Alexander Ikefuna, the city’s director of neighborhood development services.

Kimley-Horn is required to develop three conceptual alternatives through a process known in the document as “consensus building.”

“I know that one of the reasons why the firm was selected was due to their strong citizen engagement and consensus-building strategy,” Ikefuna said.

Kimley-Horn’s fee to produce construction documents is based on several assumptions, including that the bridge construction will be traditional with “cast-in-place reinforced deck beams.” There could be as many as three spans built on two sets of piers.

However, the document also states that the fee for construction documents could change depending on which alternative is selected.

“It is understood that the scope and fee of the structural design services will be contingent upon the design solution and client direction coming out of the consensus building and conceptual design process,” the document states.

The project currently has a complete cost estimate of $23 million, but VDOT only has allocated about $14.5 million to the project.

The City Council voted in November to seek $4.5 million in VDOT revenue-sharing funds to make up the difference, which will require the city to invest that much of its own funds as a match.

Kimley-Horn will be responsible for creating a new website and the proposal requires the company to work with city communications staff to update the public throughout the design process. Kimley-Horn also will create a “public engagement plan” to assist with consensus-building.

As many as three community meetings will be convened by Kimley-Horn. In addition, a youth workshop is to be held.

“This workshop will occur … at a selected city school and will allow participants to learn about the planning process and participate in several hands-on exercises,” the document states.

The scope also requires Kimley-Horn to make separate presentations before the Bike and Pedestrian Committee, the Tree Commission, the PLACE Design Task Force and the Planning Commission. Two presentations each are scheduled for the Board of Architectural Review and the City Council.

The second public meeting will be a three-day design charrette that will lead to creation of three design concepts.

“It is anticipated that the alternatives will be developed sufficiently for the public, client and consultant team to assess the comparative pros and cons,” the document states.

A technical committee and a steering committee will select a preferred concept, which will then go before the BAR for approval. Kimley-Horn would then present the final concept to the City Council for its approval.

Ikefuna said he hopes members of the public participate in the design process.

“This is a major community project and needs to have citizens’ involvement,” he said. “The timeline for completion is 15 months and we will be working with the design team to complete this on schedule.”