Could Downtown Mall trees be on the chopping block? 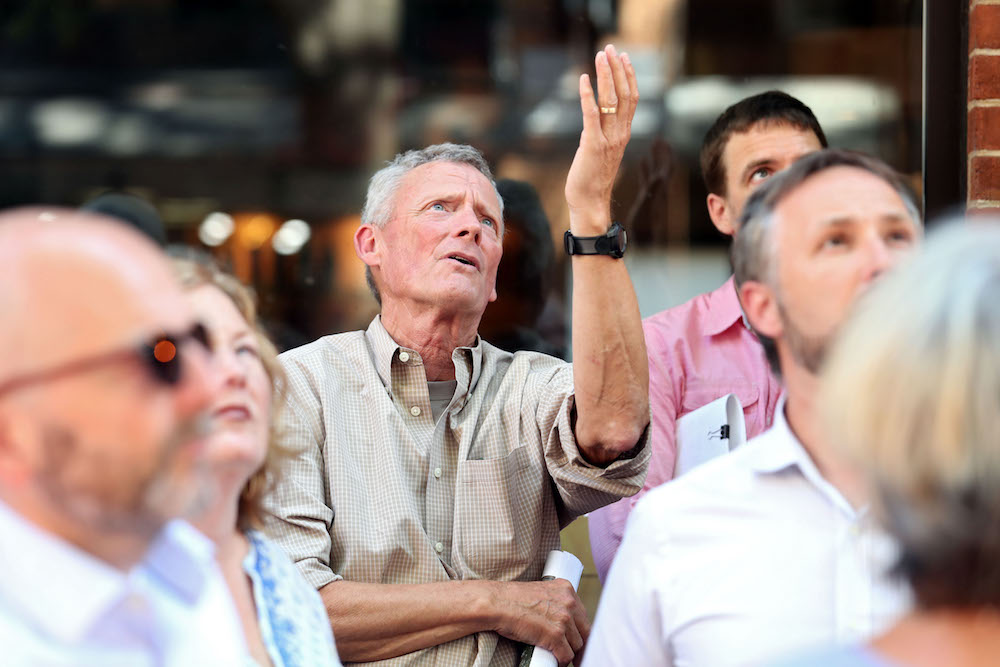 Landscape architect Jim Urban led a tour with the city's Tree Commission on the downtown mall Tuesday to explain the declining health of the trees and offer recommendations on how to move forward.

As Charlottesville’s Downtown Mall enters its fifth decade, the health and future of the willow oaks that line the former roadway have been cast into doubt.

As the trees continue to grow, their close canopies and the tight metal grates at their bases threaten their long-term health, and saving them could be an expensive proposition.

Removing the metal grates and replacing them with a combination of fabric, foam, stone and brick could cost as much as $10,000 per tree, said Jim Urban, a landscape architect hired to brief the city Tree Commission and other stakeholders.

“Of all the things on the table that cost money, this is probably the most expensive one, but it’s also the most important to be looking at,” Urban said.

In a 2015 report, Urban and his colleague Keith Pitchford outlined a series of recommendations to extend the lives of the trees, including the new base material and pruning the canopies to give each tree more access to sunlight.

“[The spacing] is causing all kinds of what we call ‘canopy suppression problems,’ where one tree gets a little healthier than its neighbor and it begins to dominate the space, shading out the branches on one or more sides of the tree,” Urban said.

To address this problem, Urban recommends pruning, or “topping,” the trees to extend their lives and allow their neighbors more access to sunlight.

“If we want to bring and deliver to our grandchildren this set of trees, we have to really think about what the long-term options are,” he said.

The 2015 report examined the health of the existing trees and found that many are beginning to be pushed to the point of failure. The report identified the main reasons for the trees’ decline and laid out short-term treatments, as well as potential long-term plans to preserve the mall’s landscape.

“I’d like to figure out how to make this thing into a sustainable, long-term rolling canopy so it’s always there,” Urban said. “And I think that’s entirely possible.”

According to Urban, the canopy pruning and replacing the grates are the most pressing issues, but the real challenge will be determining the city’s long-term solution.

The city parks department will submit a request to the budget office in mid-August to fund the mall trees project in the capital improvement budget. A committee will review all funding requests to decide which ones go before the City Council to receive funding.

“We don’t know what it’s going to cost,” Parks Division Manager Doug Ehman said. The parks department will try to change the grate systems on a few trees this winter to determine the necessary labor.

“We do a whole lot of things on an ongoing basis,” he added. “The issue is resources to do what is best.”

Urban said that creating a longer-term plan will require more discussion, recalling a comment from urban forester Paul Reiss, who said, “The science of trees is very simple; the politics of trees is really hard.”

Hypothetically, Urban said the city could keep all the trees alive as long as possible, and then replace each tree when necessary.

“The problem with that scheme is that the planting gets more and more out of balance,” Urban said. “So it will never, ever again achieve this nice canopy look. It’ll always look very odd.”

Urban said the city should look at a different approach — removing an entire cluster and replanting trees in their place. In this strategy, giving the trees proper care from the beginning would allow them to thrive.

“The draconian idea of taking everything out and starting over again is not all that bad in my opinion,” Urban said. “I would say that the idea of cutting everything down and starting the whole thing over … gives us the biggest opportunity to fix this.”

However, he acknowledged that business, political, environmental and historical preservation interests will play roles in making such a decision.

“Finding a pathway through that is probably the real challenge here,” Urban said.

Then comes what Urban called the “nasty question,” whether all the trees should be replaced, or whether some should just be removed.

Preserving the design that Lawrence Halprin created for the mall would mean replacing all the trees exactly, in the tight formation that Urban said has led to the decline of many of the trees.

“I think that on the historic preservation side, we do need to consider that these giants of the profession maybe didn’t have it all right,” Urban said.

Paul Josey, chairman of the Tree Commission, said he is personally in favor of going grove by grove as opposed to removing all of the trees at once. In general, he said he would prefer to replace each tree, although he would be OK with a compromise.