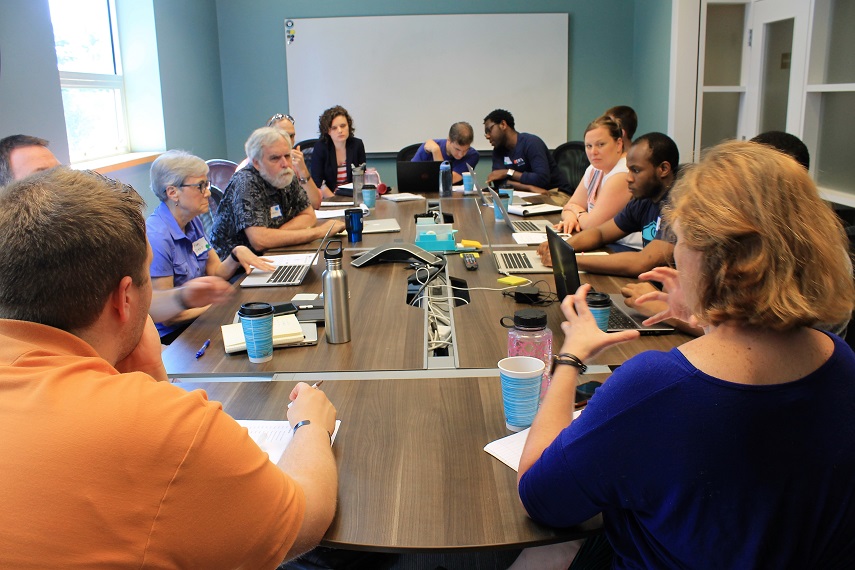 One team of Charlottesville Civic Innovation Day participants began designing a new website for the Thomas Jefferson Area Coalition for the Homeless.

The inaugural Charlottesville Civic Innovation Day brought together designers, software developers and other members of the community to tackle challenges facing local government and nonprofits.

Civic Innovation Day was organized by Smart Cville, a nonprofit organization that promotes the use of technology to drive innovation in local government and improve quality of life in cities.

“It went way beyond what we expected,” Ames said. “It’s really impressive to see the level of engagement between people who didn’t know each other when they walked in the door.”

About 60 participants spent a full day in the downtown Charlottesville headquarters of WillowTree, a mobile application software development company. They divided into smaller teams that each focused on a different civic challenge.

One team presented a tool that the city of Charlottesville’s Office of Economic Development could use to share key economic indicators with current and potential business owners.

The participants reformatted one of the city’s recent quarterly economic reports from a static PDF file to an interactive website that allowed the user to study data at exact points in time by moving their cursor over graphs.

Jason Ness, business development manager for Charlottesville, said he took part in Civic Innovation Day to get ideas for improving the user experience and the back-end development of his department’s website.

“But we got a lot more out of it than that,” Ness said. “It widened our understanding of how people interpret data.”

“I thought it was great that Smart Cville and WillowTree could pull off an event that got so many people engaged in civic innovation on a Saturday,” Ness added. “It was great to see all of the people they brought together.”

They survey would gauge residents’ willingness to report pollution that ends up in rivers and streams and identify their motives for doing so. After taking the survey, residents would receive recommendations for specific actions they could take based on their interests.

Other participants began designing a new website for the Thomas Jefferson Area Coalition for the Homeless that would help low-income residents access up-to-date information about support services.

The website mapped the location of homeless shelters, soup kitchens and other resources in Charlottesville. Phillip Schrodt, a data scientist, said service providers would be able to update information on the website by logging into a database.

“[Service providers] are also one of our clients,” Schrodt said. “We need to give them something that is simple and easy to update.”

Schrodt said he enjoyed interacting with other members of Charlottesville’s tech community during Civic Innovation Day. “This is something really special,” he said.

A group from the UVa student organization HackCville, along with other community members, offered recommendations to increase participation in the Thomas Jefferson Planning District Commission’s RideShare program.

RideShare provides an online matching service for Central Virginia residents who wish to carpool to work.

The HackCville team recommended marketing the program to more local employers, as well as creating a tool to help calculate savings and emissions reduction. It also created a mock-up of a mobile app that would allow users to give feedback on the quality of their experience.

Two members of HackCville decided to work on a project of their own choosing.

Juan Palacio and Cesar Roucco created a computer program that would collect temperature and humidity data in different areas of a farm or vineyard, and upload it to the cloud.

Palacio said that this technology could benefit farmers in his home country of Guatemala. “Having a better understanding of agricultural performance is crucial to production, especially in developing countries,” he said.

Ames thanked the government officials and nonprofit executives for participating in Civic Innovation Day. “They are willing to be open and transparent about their challenges,” Ames said. “That transparency is somewhat unique.”

Early in the day, civic technologists from WillowTree and elsewhere in Charlottesville led the groups through a design-thinking workshop to help participants empathize with the people they hoped to serve.

“Very few of us have direct experience with the kinds of problems we are trying to solve — and that’s a problem,” said Sally Hudson, a University of Virginia economics professor specializing in public services. “Remember that the users should always come first.”

Sean Harvey of WillowTree, a lead organizer of Civic Innovation Day, said the design-thinking stage of the event was valuable for both new hackers and seasoned professionals.

“Even as a professional developer at WillowTree, I rarely get to go through an exercise like that,” Harvey said.

Harvey told Civic Innovation Day participants that he hoped they would continue to work on their projects. “If this is important to you, then you need to raise your hand, you need to move forward, and you need to do this work.”

During a lunch break, participants heard remarks from Charlottesville Mayor Mike Signer, who also works as general counsel at WillowTree.

Signer said that inclusivity and a spirit of optimism were critical for a city to build a creative economy. “Companies see diversity and difference as a source of creative strength,” he said.

Signer collaborated with Smart Cville to create an open data policy for the city, scheduled for implementation later this year.