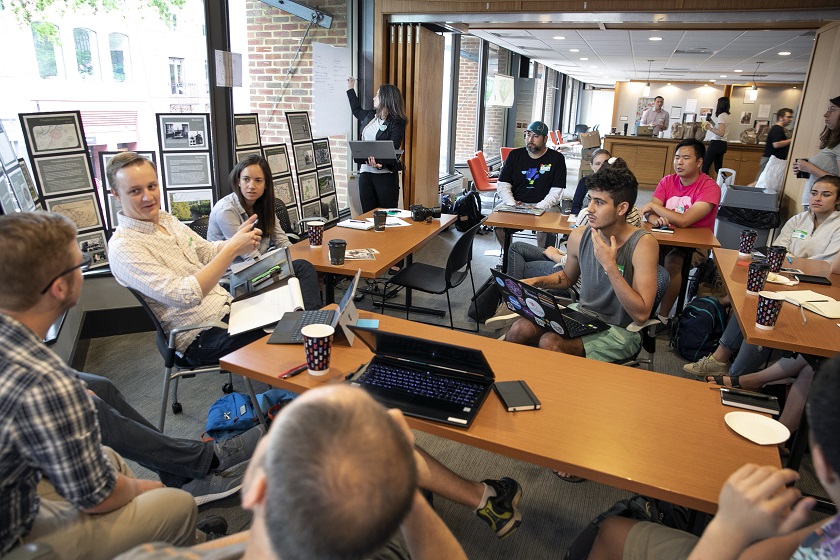 Technology professionals, university students and other community members worked together on projects to improve local quality of life at the second annual Charlottesville Civic Innovation Day.

Civic Innovation Day is organized by Smart Cville, a nonprofit that promotes the use of technology to improve local government and public works. The event drew about 70 people to CitySpace on Saturday.

“Civic engagement works best when it is hands-on and purpose-driven,” said Lucas Ames, chairman and founder of SmartCville. “I firmly believe when we work together and break out of our silos, the outcomes for our community will be really valuable.”

Sean Harvey, principal software engineer at WillowTree Inc., told participants that they were not expected to develop slick, polished apps by the end of the day.

“Today we are most likely to come up with a whole bunch of questions and some really good ideas — and that is okay,” Harvey said. “It is our privilege and responsibility as developers and [technology] enthusiasts to ask these questions and try to help.”

“Last year, we found that the projects fell short after [Civic Innovation Day] because there was no structure to keep them going,” Erwin said. “The fellows will take a look at all of the projects from today and assess how to take the next steps forward.”

One group of participants worked with representatives from the Charlottesville Fire Department to lay groundwork for a predictive model to monitor fire risks and suggested ways to educate the public about fire safety measures.

“As firefighters, we tend to approach problems by solving them ourselves,” Baxter said. “But there comes a moment where you have to recognize that there are other people on the planet with abilities we will never be able to develop internally or organically.”

Another team created maps and made a mock-up of an app to integrate route information for Charlottesville Area Transit, the University Transit System and JAUNT.

“There is a coordination problem between the three systems,” said Stephen Johnson, planning manger for JAUNT. “Our clients and the technologies we use are a little bit different.”

A third challenge focused on Albemarle County’s Rio+29 Small Area Plan. The county launched the study in 2016 to guide future redevelopment around the intersection of U.S. 29 and Rio Road.

“We can’t dictate what private property owners should do with their property, but we can provide some form of regulation through zoning,” said Rachel Falkenstein, senior planner for Albemarle County.

Civic Innovation Day participants designed a website and suggested strategies to improve community engagement with the small-area plan and to illuminate the history of the Rio area.

The Rio area has been home to Native Americans, plantation owners and enslaved people who became some of Albemarle’s first black landowners after the Civil War. The area also includes the site of the Civil War skirmish at Rio Hill.

“Underneath all the strip malls and parking lots, there is a lot of fascinating history,” said Albemarle County planner Andrew Knuppel.

Project teams started the day with two hours of “problem discovery,” trying to learn as much as they could about their challenge and the people affected by it.

“You are not the user, and the problem that you are trying to solve is not your problem,” Harvey said. “The only way you are going to solve this is by checking your biases at the door and trying to imagine what it is like to be that person.”

Megan Juelfs, of the Thriving Cities Group, gave a keynote address during a lunch break.

Thriving Cities Group is an initiative of the University of Virginia’s Institute for Advanced Studies in Culture. It provides resources to scholars, foundations, community leaders and other people interested improving the wellbeing of cities.

Juelfs is chief data officer and content director for the Thriving Cities Group’s Indicator Explorer, an interactive online database of thousands of indicators that cities have used to monitor their own condition.

Juelfs said poverty, violent crime, high school graduation rates and median household income are the indicators that appear most frequently in the database. However, she said most of its indicators were submitted by just one community — and sometimes can seem unusual to outsiders.

For example, the small city of Vernonia, Oregon, has chosen to track the number of high school students completing hunter safety training courses each year as a measure of community health.

“Thriving has to be rooted in what communities think of themselves, not what outsiders tell them,” Juelfs said.

Katelyn Stenger, a graduate student in UVa’s Department of Civil Engineering, worked on the Rio-29 history challenge. She moved to Charlottesville just two weeks ago and said she has spent most of her time in the Rio-29 area at Trader Joe’s.