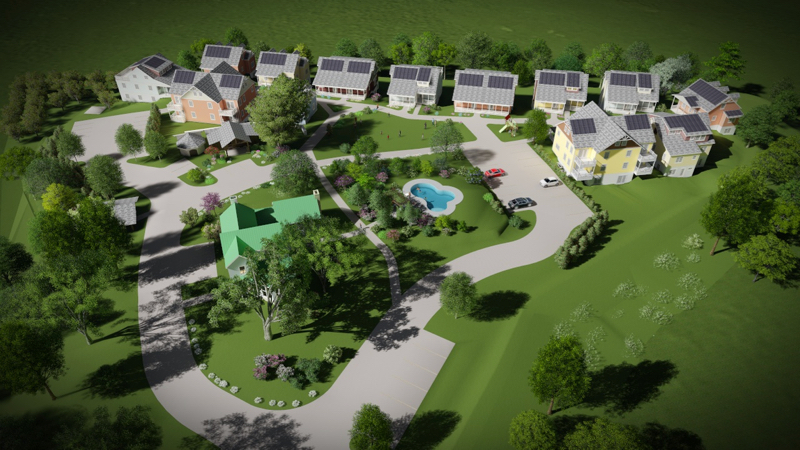 Emerson Commons will have 26 residential units, including multifamily and single family attached and detached units.

A new cohousing community will be coming to Crozet by 2018.

Emerson Commons will be located on 6.1 acres along Parkview Drive off Route 240, near the Crozet Veterinary Care Center.

“For some people, this ‘cohousing’ term, they’ve never heard it before, this is the first in this region,” said Peter Lazar, who is developing the community. “Some of the core elements that you see in every cohousing neighborhood is that parking is on the periphery, so that’s a fundamental aspect of it to make it pedestrian-oriented, [and] the houses are clustered so that there’s more green space.”

Cohousing originated in Denmark and started to be adopted in the U.S. in the 1980s.

People in a cohousing community own their own homes, but have opportunities to participate in numerous neighborhood activities and share open spaces.

Lazar, his wife and two daughters currently live at Shadowlake Village, a cohousing community in Blacksburg.

This sense of community at Emerson Commons was attractive to Nicole Beasley, who recently moved to Charlottesville from San Francisco and has become a committed member of the Emerson Commons community.

“In the [San Francisco] Bay area, cohousing is very popular and really hard to get into,” Beasley said.

Beasley, who has two children and currently lives in the city, said she looks forward to eventually living in the neighborhood and getting to know the other families.

Lazar said he hopes to start construction this fall or next spring, with the first homes built by next summer and the whole neighborhood completed in 2018.

“What I hope to realize through cohousing is a really functional neighborhood in a way that I think often times neighborhoods aren’t,” Beasley said. “What I mean by that is people coming together to support each individual’s well being collectively.”

Both Beasley and Lazar said one misconception of cohousing is that it’s a commune.

“People often think cohousing is like a commune, which it isn’t. It’s more like living in a really functional neighborhood,” Beasley said.

“You buy your house and sell it, just like you would any other house,” Lazar said. “It’s going to be a condominium structure where you actually own your house and footprint under the house.”

The community will have a total of 26 residential units, with a combination of multi-family and single-family attached and detached housing.

The houses will also include solar panels and private backyards.

A renovated farmhouse currently on the property will facilitate many of the neighborhood activities.

The house, which dates to 1890, will have spaces for community events and meals, as well as guest rooms.

Alice Alexander, executive director of the Cohousing Association of the United States, said Emerson Commons is part of a bigger movement.

“It’s part and parcel of what we are doing to build community across the country, to create friendly neighborhoods where people are supporting each other,” she said.

“We don’t want to be living in the anonymous suburbs where you have to get in your car and drive everywhere to do anything,” said Alexander, a baby boomer herself.

She said millennials with children also are drawn to cohousing.

The association is aware of 162 established cohousing communities in the U.S. and 130 that are forming.

“There’s been a definite increase since we are moving past the economic debacle of 2008, where it was hard to have any kind of housing start anywhere,” Alexander said.

Plans for cohousing on the Crozet property date back to a 2007 rezoning that created a planned residential development on the parcel, but the original plans for the Blue Ridge Cohousing project fell through with the recession.

“In 2013, I noticed that a contract for the same property fell through, and so my wife and I just bought it, and we rented it out for a couple of years, and our thought was to try it again, to do something with the property,” said Lazar, who also worked on the Blue Ridge Cohousing plan.

Nine families already have committed to living in Emerson Commons, where home prices will range from $260,000 to $400,000.

“The core group of people were fans of Ralph Waldo Emerson,” Lazar said. “A lot of his philosophy I think works well with the philosophy of community and having a simple life.”