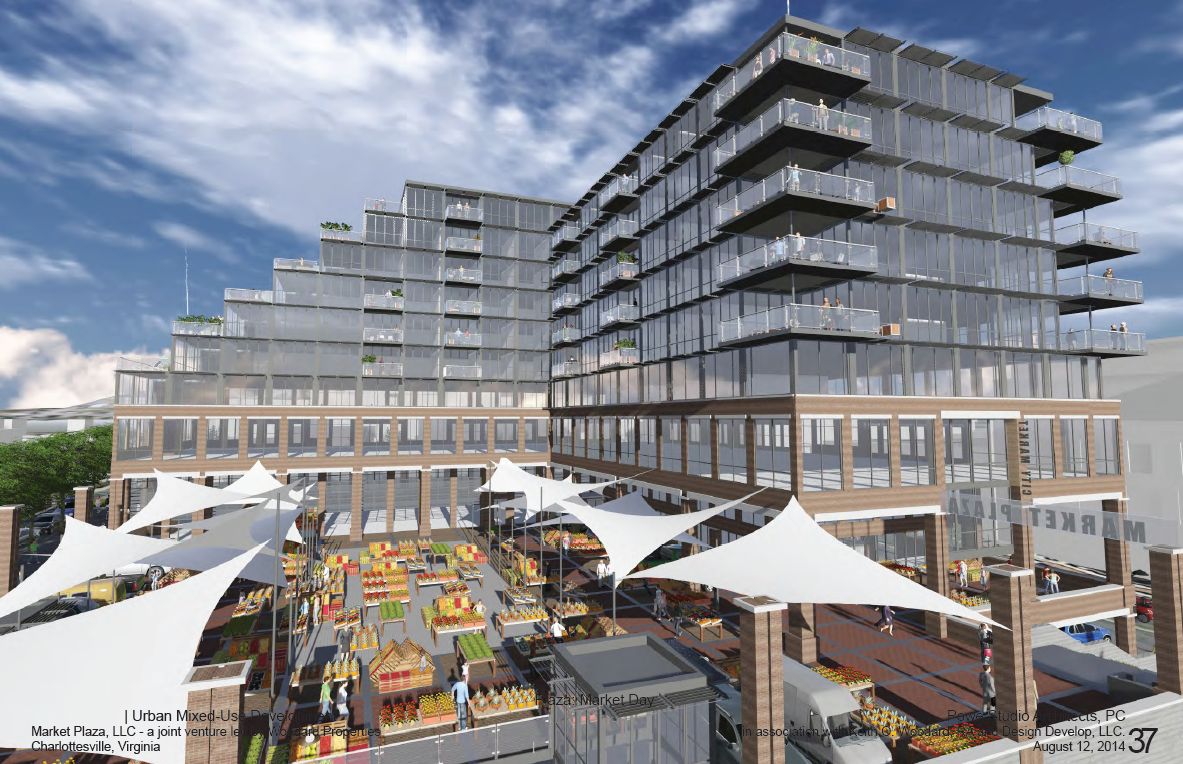 A proposal to replace a city-owned parking lot in downtown Charlottesville with a nine-story structure will go before the City Council in December.

The Council originally had been scheduled to consider the Market Plaza proposal this month but the Planning Commission took additional time to reach agreement.

Over the course of three meetings, commissioners debated several conditions by which they would favor allowing developers Gregory Powe and Keith Woodard the additional height and housing density they had requested.

The site is the current home of the City Market. After several years searching for a new location and conducting multiple studies, the council decided last December to ask the private sector to send in ideas for how to develop the site while retaining both the market and public parking spaces.

Councilors selected the Market Plaza concept last summer. The plan is to have two stories of retail, three stories of office space and several floors of residences in an L-shaped building. The City Market would be located in a 25,000-square-foot open-air plaza with an additional 9,000 square feet of covered space.

The commission’s recommendation last week came after members spent more than three hours discussing conditions that reflected their concerns over a project that will reshape the look and feel of downtown.

“The thing that worries me the most about the project is the potential impact to Water Street,” Commissioner Dan Rosensweig said. “Water Street wants to redevelop in a way that is pedestrian friendly and that has people entering buildings, leaving buildings, and people congregating outside buildings.”

Powe said the conditions on Water Street will improve after the project is built and pointed to one example.

“We have met in great detail and continue to negotiate with Dominion Power to remove all power lines above ground on our side of all four streets,” Powe said. “It’s our firm goal to not have any power lines on this property.”

Commissioners discussed language about how the building should include openings onto streets, how the plaza should be managed, and ensuring that First Street remains open to pedestrians at all times as a public right-of-way.

Conditions had to be somewhat vague because there are still several matters that need to be negotiated as part of the sale of the city’s land. For instance, it is not yet known who will own the open-plaza that will house the market but commissioners wanted to ensure it would remain a public amenity.

“We do want it to be more than an incidental market,” Commissioner Genevieve Keller said. “The reason we are approving this is because we want a farmer’s market in this location.”

One of the conditions is related to whether Powe should agree to reserve space on First Street to accommodate an entranceway to a hypothetical building that might be constructed on an adjacent lot to the east owned by the Charlottesville Parking Center.

The commission’s conditions also include suggestions to the Board of Architectural Review for design standards that are out of the Planning Commission’s scope. The BAR must issue a certificate of appropriateness and is expected to do so after the City Council decides on whether to grant the permit.

The Planning Commission’s recommendations are not binding.

The commission also held a preliminary discussion for a special-use permit to allow Carr Hospitality to build a nine-story hotel at 1106 W. Main St. The building that houses the Studio Art Shop would be demolished to make way for the new structure.

“We are an urban developer,” said Austin Flajser of Carr Hospitality. “[This will be] an urban hotel following urban design principles with an activated ground floor with all the uses towards the front of the building to try to drive foot traffic.”

The commission is expected to formally consider the permit at its meeting in December but the initial meeting was a chance to see if members saw any red flags.

“Our preliminary discussion is really the critical time for us to give them feedback,” Rosensweig said. “There’s no way a project can evolve unless we’re prepared to share with [developers] our ideas.”

Some commissioners expressed concerns about how the project would disrupt the Charlottesville Area Transit stop in front of the property.

Others said the hotel market is saturated and a request for additional height did not have to be granted.

“Don’t we already have a hotel that’s being built now at the other end of West Main Street?” asked Commissioner Taneia Dowell. “We have the Hampton Inn one block up. We have the Courtyard Marriott right across from that and the Red Roof Inn.”

However, Flajser said his company is interested in the site because of its proximity to the University of Virginia Medical Center and that his research indicated there is still demand.

Keller said she was not yet sure if she would recommend approval to allow the developer to exceed the 70-foot height allowed by-right under the existing zoning.

“Increasingly we are asking for developers to justify why they should get two more stories,” Keller said. “I’m a little concerned about the canyon effect on West Main Street.”

Though they took no vote, the majority of commissioners indicated they could support the height.

“I couldn’t think of a better project for West Main,” said Commissioner Lisa Green. “The traffic is an issue and the bus stop is a huge issue, but it seems logical.”