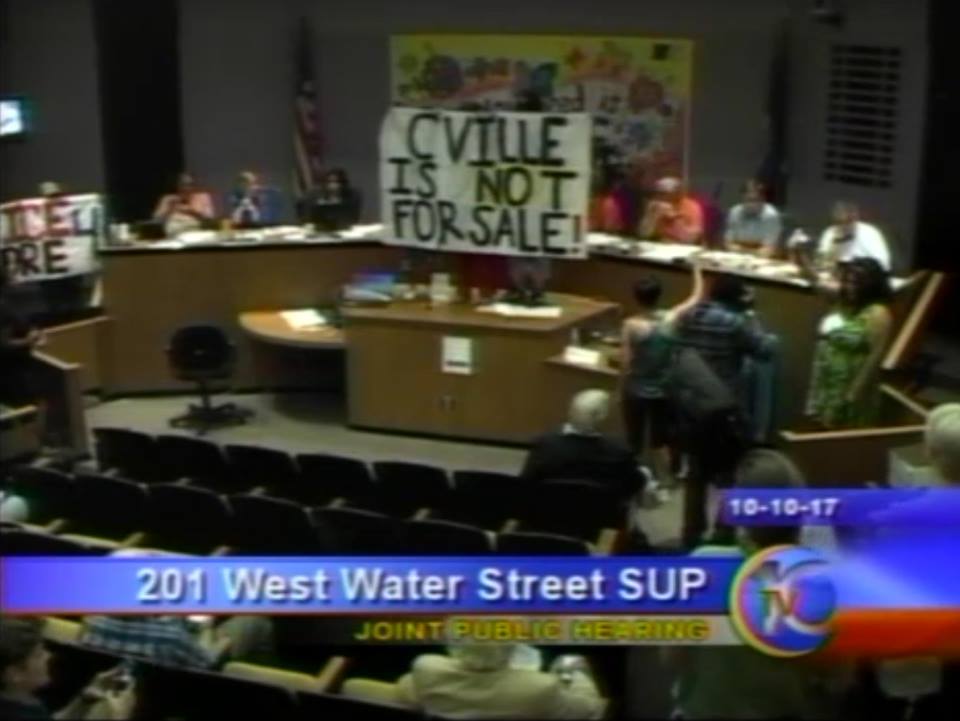 A City Hall protest by Solidarity Cville and Standing Up for Racial Justice prematurely ended the regular meeting of the Charlottesville Planning Commission on Tuesday.

Their protest began at the start of the commission’s public hearing on a special-use permit for an eight-story building at 201 W. Water St. It ended when Charlottesville police asked everyone to leave first City Council Chambers and then the entirety of City Hall.

“White supremacy in this city manifests in many ways,” reads a flyer that was handed out shortly after a trio of protesters climbed on the dais to unfurl a banner that stated “Cville is not for sale.”

The flier went on to claim that affordable housing for extremely low-income people — defined as those making less than 30 percent of the area’s annual median income — is disappearing.

To address the issue, City Council earlier this year agreed to double the amount of funding allocated to the affordable housing fund over the next five years to a total of $16 million. Later this month, they are set to vote on a $900,000 program to increase the number of people eligible for housing choice vouchers.

The flyer also mentioned charges brought against DeAndre Harris, a black man beaten by white nationalists shortly after the Aug. 12 Unite the Right rally. A warrant has been issued for Harris’ arrest on a felony charge of unlawful wounding stemming from accusations that Harris struck another person before the beating in the Market Street Parking Garage. Harris’ lawyer says the complainant, Harold Ray Crews, a League of the South leader, is providing incomplete video evidence to back up his claims.

“This has happened over and over again,” reads the flier. “White supremacists either going to the magistrate to press bogus charges against anti-racist activists or going to the Planning Commission to ask for special-use permits to displace residents.”

There were four requests for special-use permits on the agenda Tuesday. Two were for spaces that are currently unoccupied. Another is for permission to operate a dog run on Cynthianna Avenue.

Another was for a rezoning on Park Street for a senior living facility to a land-use plan to guide future redevelopment of the intersection at U.S. 29 and Hydraulic Road.

The Monticello Area Community Action Agency and New Millennium Senior Living Communities are seeking the rezoning of 9.3 acres off of Park Street from single-family residential to the “planned unit development” category.

MACAA would move into a new structure to be built on the site, while New Millennium would construct a four-story senior facility.

The project came before the Planning Commission in August for a preliminary discussion. Based on feedback given at that meeting, the applicants made several changes.

“A lot of the concerns that commissioners have articulated have been shepherded by MACAA,” said architect Kurt Wassenaar. “They run the Head Start program. They run Project Discovery. They are in the process of creating a workforce training program.”

Wassenaar said one goal of that program would be to train people to work at the center.

Retirement Unlimited Incorporated will be the operator of the facility. Wassenaar said there would be 85 full-time and part-time jobs with an annual payroll of $2.6 million and $400,000 in new tax revenue for the city.

“The overall unit count has been reduced from 151 senior units to 145 senior units, and they have added four affordable senior units on Park Street,” Newmyer said.

Those four units would be in a duplex at 1023 Park St. that would be restricted to people older than 62 who also make less than 80 percent of the area’s annual median income. The applicant also would contribute $75,000 to the affordable housing fund.

The size of the senior facility also has been reduced.

“I want to commend the applicant for reducing the building by one story,” Newmyer said, adding that she still has concerns with the mass and scale of the building.

The number of parking spaces has been dropped from 164 to 140.

Left-hand turns from the development onto Park Street would be eliminated. The developers also will pay for a pedestrian flashing beacon to be installed at a crosswalk across Park Street. The applicant also will formally request a stop on Charlottesville Area Transit’s Route 11.

Newmyer said MACAA would offer some of its space as a meeting area that could be used by the public.

The density remains at 16 units per acre, which is just outside the range called for at the site in the city’s Comprehensive Plan.

Several residents of the neighborhood expressed concern about the project.

John Hossack, of Davis Avenue, said MACAA has been a good neighbor to the community for years and he supports their mission and purpose. However, he said, he still has concerns that Park Street cannot handle the additional traffic that will be generated.

“It is really beyond argument that Park Street for many hours of the day is gridlocked,” Hossack said. He also said older drivers seeking to exit the site may not be able to navigate the conditions.

“This is fundamentally a transfer from residential use to commercial use, and that should have a very high bar to clear,” Hossack said.

“We are relying on the commission and the City Council to take steps to help our community stay a community,” said Cecilia Mills, a nearby resident who said the proposal did not provide enough affordable housing and would not pay high-enough wages.

Others argued against the rezoning because it would set a precedent for commercial zoning north of the U.S. 250 Bypass and west of the railroad. The land is predominantly zoned for single-family residential use. Others asked for the affordable housing contribution to be increased

The executive director of MACAA, Harriet Kaplan, said the site’s development is necessary in order for the organization to survive.

“The existing building has outlived its useful life and is too expensive to renovate,” Kaplan said.

Commissioner Taneia Dowell recused herself from the hearing because she is the director of MACAA’s Project Discovery program.

The commission did not make a recommendation on the special-use permit because the meeting was interrupted at the beginning of the hearing for an eight-story building at 201 W. Water St.

Initially police were not present at the meeting but arrived after about 10 minutes. Chants and slogans were shouted for another 20 minutes before a police officer announced that everyone — including commissioners and members of City Council — had to leave chambers or be arrested.

Protesters and members of the audience complied.

It is unclear when another meeting will be scheduled.