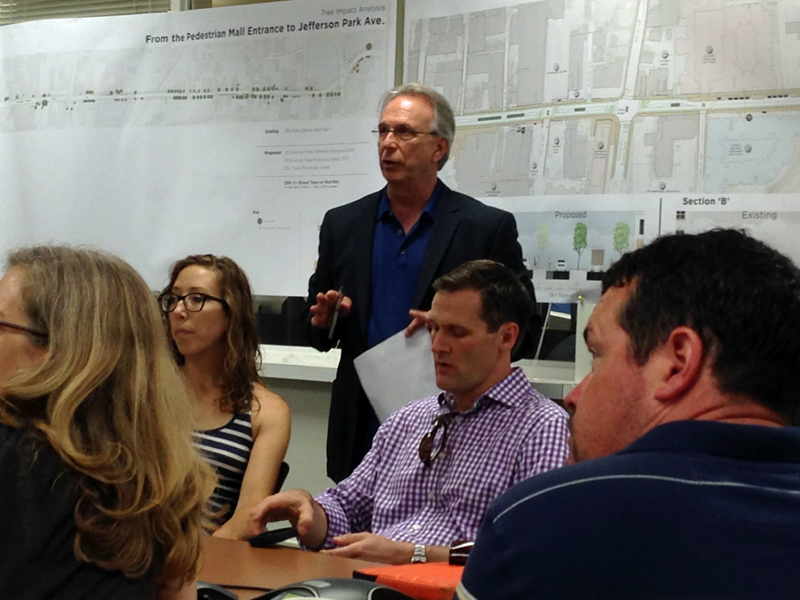 A conceptual plan endorsed by the West Main Street steering committee could result in some noticeable changes along the busy Charlottesville corridor, including a reduction in traffic lights, elevated bicycle lanes and fewer on-street parking spots.

The Alexandria-based design firm Rhodeside & Harwell, which was hired by the city to coordinate multiple studies of West Main’s urban design, presented its plan to the committee Tuesday.

“After we met with you … we assimilated what we learned and developed a direction that we feel is responsive to what your concerns are,” said consultant Elliot Rhodeside.

One of the concerns identified in previous meetings was the reduction of on-street parking. But the conceptual plan that was shown to the committee still reduces parking along the street by 33 spaces.

“It seems to me we’re going to spend all this money to say ‘come here, but we have no idea where you’re going to park,’” said Charlottesville restaurateur and committee member Andy McClure. “Every business owner, and property owner, would be concerned about this.”

Director of Neighborhood Development Services Jim Tolbert said the city is aware of the problem and that his staff is in the process of trying to add public parking in other places nearby.

“We have been having private negotiations with two developers right now who are looking at projects that would put public spaces, that we would actually pay for, potentially, in their developments,” Tolbert said. “If somebody is going to build a parking deck to support their development, for us to go in and buy 50 to 100 places in that deck, that are then available and open to the public, is the most efficient way to go.”

Another change that the street could see is the addition of elevated and protected bicycle lanes on both sides of the road. Providing bike lanes that are protected from on-street parking could help to reduce the number of bicycle accidents that have occurred along the road.

“The bike lanes will probably mostly be used by people who are tootling along, a little slower, maybe have children on bikes, and it’s a safer environment,” said committee member Rachel Lloyd. “People who are really moving can go in the vehicular lanes.”

New stop signs for all vehicles on West Main are intended to calm traffic and improve safety. Earlier plans had suggested replacing the signals at Seventh Street and Fourth Street with mini-roundabouts, but the new plan shows four-way stop signs at both intersections. Signals would remain at Ridge-McIntire, 10th Street and Jefferson Park Avenue.

“This would help calm the traffic down on West Main, make it more of a pedestrian-pleasing environment by having the slower traffic,” said Ron Sessoms, a designer with the firm.

The intersection of Ridge-McIntire and West Main would become a four-point intersection by eliminating the South Street entrance and having those drivers go onto Water Street. A plaza and gateway area would be added around the current Lewis and Clark statue, pushing the right-hand turning lane onto the other side of the statue.

Maintaining and increasing the number of trees along West Main also was something the firm said it had heard about from the public. While 40 to 50 of the existing 140 trees would be removed as a result of the conceptual plan, about three times as many new trees would be planted, resulting in a total of almost 300 trees in the corridor.

Another proposal is to shrink the maximum building envelope to only what is currently allowed by-right. Tolbert said the proposal is still a rough draft, but that current by-right building heights would remain while special approvals for taller buildings would no longer be considered.

“There is the Downtown Mall, which is brick, there is the [University of Virginia], which has a lot of brick, and should this connector place be different?” Rhodeside asked. “From what we heard, and what we think, it should be different and it cannot have a lot of brick in it and still be a very beautiful place that is resonant of Charlottesville.”

The total cost of the plan is not yet known, but Tolbert said one of the options being discussed is implementing it in separate eastern and western phases, spreading out the cost over time.

The conceptual plans will be presented next at a public input session this summer.