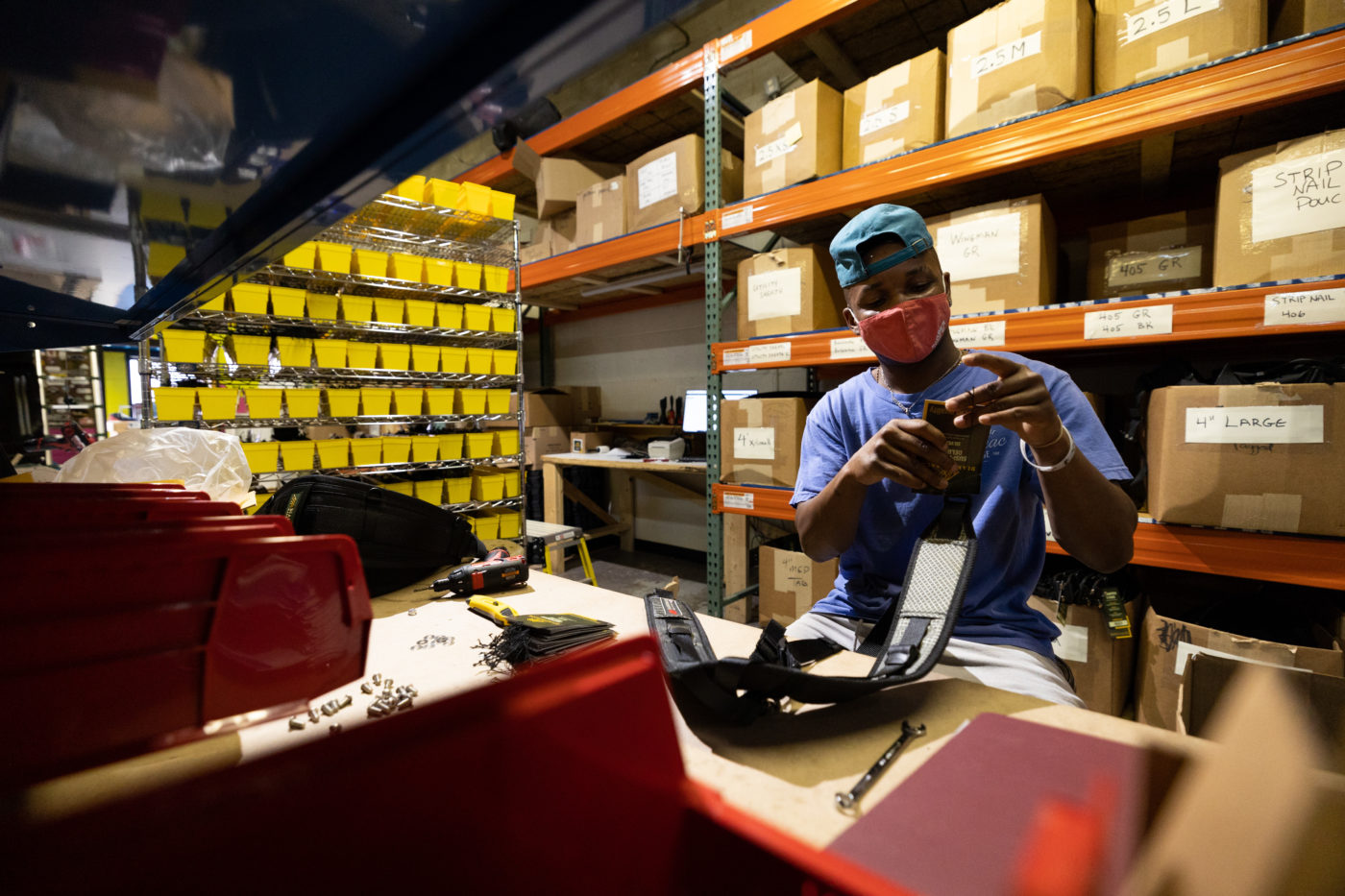 Muse Mohamed adds hang tags to a belt in the Diamondback warehouse. He's known the company's CEO since he was a little kid. Mike Kropf/Charlottesville Tomorrow

Young men pad back and forth across clean concrete floors, carefully weaving around workbenches on their way to organized metal racks full of yellow plastic shelf bins full of hang tags, pulling straps and pouches and loops out of clearly labelled boxes, stretching elastic bands around tagged products and dropping said products into yet more labeled boxes to be taped shut and addressed to places all over the globe: Canada, the United Kingdom, Bermuda, Korea, Japan.

This impeccably neat, high-ceilinged chartreuse-fronted warehouse on Allied Street is home to one of Charlottesville’s most well-kept business secrets built upon community connections: Diamondback Toolbelts.

Diamondback came to Charlottesville in 2016, when local attorney Connor Crook decided that “after 13 years of pure misery,” as he says, “being a lawyer sucked,” and wanted to do something else. Crook grew up around construction and started surveying that landscape, his attention landing on the premium toolbelt world. He and his former business partner heard that the Diamondback Toolbelts company had shut down production and was for sale, and after some research that included finding out how dedicated Diamondback Toolbelt wearers were to the company’s product via a Facebook group, found two samples to learn from (most people weren’t willing to sell their Diamondbacks, especially with the company shut down), and dove in, working on a six-month backlog, setting up manufacturing in Milwaukee, and expanding the product range.

San Francisco-based master carpenter Jim Skelton made the first Diamondback Toolbelt in 1992. Skelton hurt his back on the job and out of necessity, created a supportive, technically advanced toolbelt that would ease his back pain and allow him to work (that first belt was reportedly based on a windsurfing harness design). 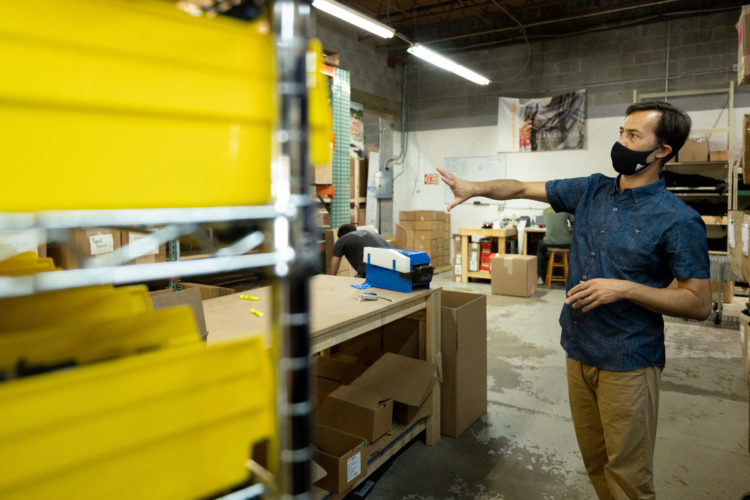 Diamondback Toolbelts CEO Connor Crook gives a tour of the company's 4,000 square-foot Allied St. warehouse, which is quickly becoming too small for the operation. From this location, Diamondback fulfills both wholesale and custom orders for distributors and customers all over the world. Mike Kropf/Charlottesville Tomorrow

After buying the company, Crook, now Diamondback’s CEO, started assembling and mailing belts from a 200 square-foot space in his law office. Now, Diamondback has 16 employees and is poised to outgrow its 4,000 square-foot warehouse in the next year.

This time last year, though, the company had just three employees, including Crook, and its future was uncertain when the supply chain dried up when factories paused production due to COVID-19 concerns. They sold off most of what they had and just sat still for a minute. But in late spring/early summer, business exploded. Tradespeople are essential workers, after all, and the pandemic has precipitated a home improvement boom. Crook estimates that now, Diamondback sells twice as much product during a good week than it sold in its entire first year.

Crook and Harrison met about 20 years ago, when they played defense and striker, respectively, against one another during a regular local pickup game.

A couple years into their regular face-offs, both Crook and Harrison went in for a header and collided. “There was blood,” Crook remembers.

“He got stitches, I had a contusion the size of an orange and a concussion that lasted for two weeks,” says Harrison. 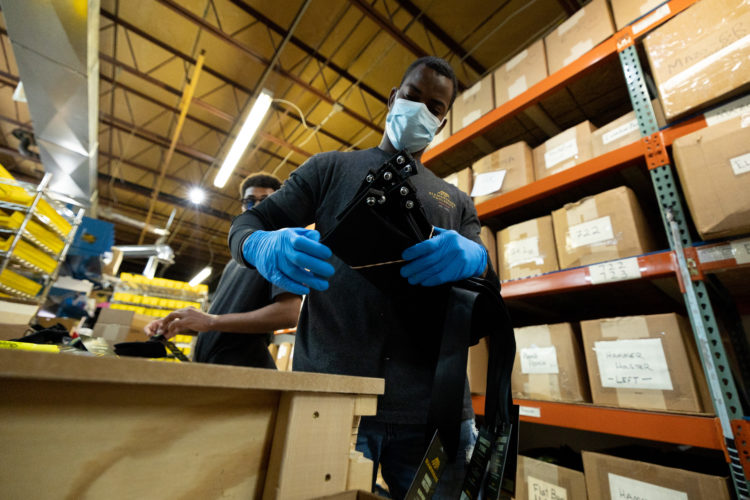 Years later, Crook emailed the soccer listserv looking for paid help packing boxes around the winter holidays. Harrison was looking to make some money during a teaching offseason and shot Crook an email. A phone call further piqued Harrison’s interest, and he started researching premium toolbelts. Three hours later, he was deep in the rabbit hole and full of ideas. Over the next few months, the two men chatted while they assembled belts and packed boxes. They talked about ideas for new Diamondback products, about competitors’ products, about what they were seeing and hearing about the needs of tradespeople, whose often backbreaking work is the backbone of society but isn’t respected as such.

“Our customers are the people who’ve been sold junk all of their lives, who are seen as ‘just carpenters,’ or ‘just construction workers,’” says Crook. But they deserve a well-fitting, well-made belt that will last years and years (“a lifetime” according to many Reddit users in a thread on toolbelts), and that’s what Diamondback seeks to deliver through its seven preconfigured belt systems, which offer different levels of capacity, mobility, support and organization and range in price from about $315 to $450. A customer can build their own system, too, choosing from a selection of belts, holsters, suspenders and more.

Soon, they’ll be offering apparel and storage solutions as well, says Crook. He adds that every piece is manufactured in the United States, and Diamondback customers seem to care about that. “They’re working people. They respect that people should make a living working.”

Harrison and Crook pride themselves on being honest and straightforward, and they say they’re not the typical trade show tool slingers (neither is a tradesman himself). They’re outgoing and love to chat, and the more they attended trade shows and engaged with carpenters, electricians, plumbers, painters, and others on social media, the more they learned about what those folks need and want.

“That sort of became the ethos of the company,” says Harrison. “We give a damn about the needs of the tradespeople,” and they put research into materials, folding techniques, sewing techniques, etc., in order to deliver.

“I’m not trying to sell you a fantasy,” says Harrison. “I am trying to tell you a reality. Connor’s the same way.” 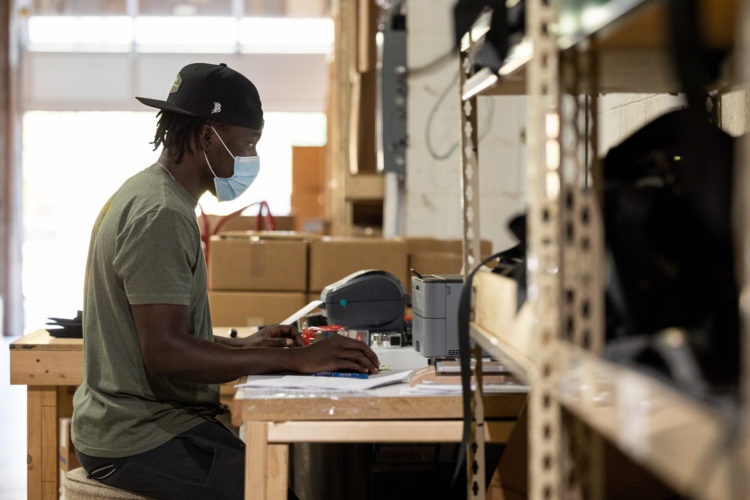 Diamondback has built its audience mainly via social media (at time of publication, @diamondback.toolbelts had more than 79,700 Instagram followers), where tradespeople and craftspeople are constantly sharing advice, demonstrating building and finishing techniques, advising one another on tools and materials, really lifting one another up, says Harrison. He and Crook also hosted two seasons of a Diamondback podcast, where they talked about the day-to-day experience of building the company, the failures, the successes, and everything in-between. It gave potential and already dedicated customers an inside look into where and who the products were coming from. Harrison says it made them relatable, which is good for business.

They have distributors in places as far away as Australia and even have a showroom in Korea. One place they don’t sell many belts, though, is Virginia. In fact, says Harrison, it’s tough to break into the U.S. market at all, since many tradespeople here are already very loyal to longstanding brands like Craftsman and Carhartt. He figures that they can use some of the money they make in the international market, plus the clout they’re building online, to make it big at home.

It’s quite possible, particularly now that the company is growing at such an extraordinary rate. About nine months ago, Harrison, Crook, and another employee were doing the work of at least three times as many people, and when they sought to hire more folks, they knew where to look: Charlottesville’s elite soccer pitch.

Warehouse manager Hamza Touray (who is originally from Gambia), met Harrison and Crook via soccer. He’s been with the company eight or nine months now and says that even though it’s been tough to have the company grow so much in such a short period of time, it’s “a pretty healthy” work environment, where everyone’s from a slightly different background, but they all know one another and feels comfortable joking around.

Muse Mohamed, who is Somali, grew up in Charlottesville’s refugee community and has known Crook for years. “Since Muse was this big,” says Crook, hovering his flattened hand just a few feet off the cement floor. Touray, Mohamed, and others have brought in some of their friends, too, and that adds to the warm and relaxed vibe of the warehouse, which might otherwise feel cold and impersonal with its high ceilings and impeccable organization.

Harrison takes pride in working for such a fast-growing company alongside some of the kids — now adults — that he and Crook coached and mentored in soccer long before either of them had even heard of Diamondback. Young men they called teammates on the field are now their teammates in business, too.