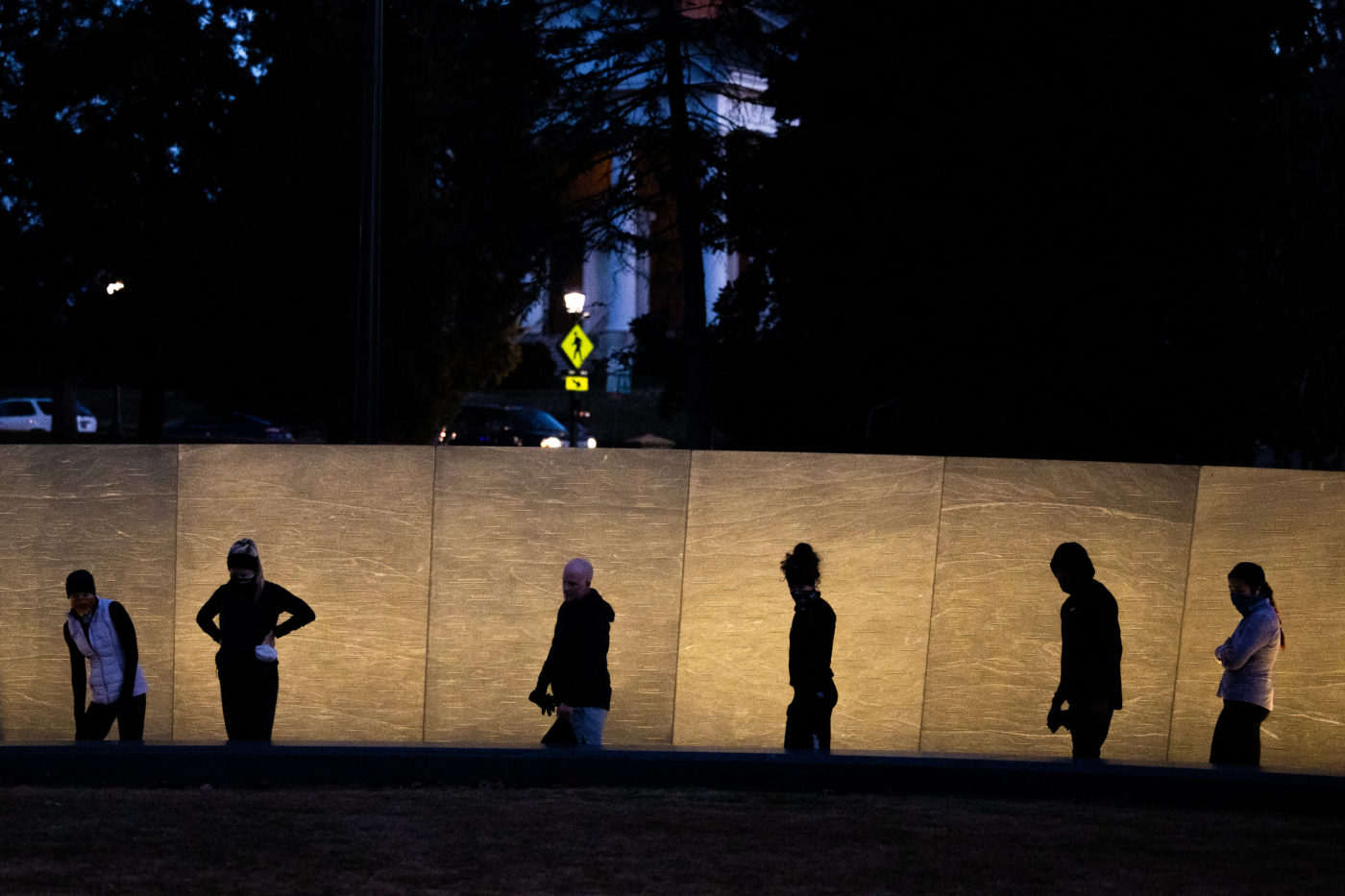 Members of the Prolyfyck Run Creww visit the University of Virginia's Memorial to Enslaved Laborers.

Editor’s note: Although Descendants Day is part of the University of Virginia Memorial to Enslaved Laborers dedication events, it was hosted entirely by the descendant group, Descendants of Enslaved Communities at UVA. DEC-UVA is an independent nonprofit organization led by descendants of enslaved and free Black laborers at UVA. They can be found on Instagram and Twitter @descendantsuva.

On Saturday, the University of Virginia is hosting a virtual dedication of the Memorial to Enslaved Laborers. The dedication comes one week after the Virginia Supreme Court overturned a Charlottesville Circuit Court’s ruling, clearing the way for removal of the city’s two Confederate statues. While UVA’s memorial is a welcomed addition, for some Charlottesville-area residents, it is bittersweet.

UVA, known for its serpentine walls that once concealed enslaved workers, placed the memorial that honors those very slaves in a very public spot — along University Avenue a few hundred feet from the dome of the Rotunda. The university created the monument to recognize the estimated 4,000 enslaved laborers who built and maintained the campus for over four decades. Spearheaded by students in 2010 — and continued by collaborative efforts from the UVA President’s Commission on Slavery, alumni, faculty, staff and community members — the memorial’s dedication has been more than a decade in the making.

The Board of Visitors approved the design for the memorial in June 2017, and construction began in January 2019. The dedication was scheduled for April 2020, but COVID-19 pandemic delayed the original dedication plans by one year. Saturday’s dedication date is one day after the anniversary of Confederate Gen. Robert E. Lee’s surrender in Appomattox County.

Since its completion, the Architect’s Newspaper awarded the memorial Project of the Year and Best in Public and Social Impact. UVA has committed to making the monument a living memorial; as the university continues to identify the descendants of the enslaved it plans to unveil additional names annually during an event called “Descendants Day.”

The Memorial to Enslaved Laborers offers long-awaited recognition that the laborers did not receive. Though there is excitement in honoring them and their descendants, there are community members who are unable to trace their lineage. To them, the memorial serves as a reminder of a family history they may never know.

Charlottesville resident Myra Allen has spent the last 18 years researching her family genealogy. Although her family’s surname is Jefferson, she has been unable to determine how her family obtained the name. While she has spent time admiring the site, Allen expressed mixed emotions over the memorial. She said that there are still pieces missing.

“There are names on the memorial that don’t have a last name,” she said. “I have Nathans and Isaacs and Charleses in my family. All those are common names. But how do I prove that person is or isn’t my ancestor?”

When asked how she felt about the honoring of the enslaved laborers she stated, “Some families might know and have stories. Mine do not. But I know that my family has been around here for over 200 years.”

Myra Anderson, a community fellow at the UVA Equity Center and a descendant of enslaved laborers, understands Allen’s frustrations. Anderson’s family descends from the enslaved of Monticello who were later sold to the university. While Myra Anderson’s family does have adequate documentation of their familial history, she faced challenges in having her family’s names added to the memorial.

When asked about the process of adding her family names to the memorial she shared, “Having my ancestor’s names in every single university document of the enslaved people, the burden was still on me to bring forth the information.”

The experiences of both Anderson and Allen highlight an important question: what happens to those individuals who cannot provide documented proof of their heritage?

“I have raised the question to the university,” Anderson noted, “are you going to honor oral history?”

Cauline Yates is a member of the Memorial to Enslaved Laborers Community Engagement Committee and a descendant of enslaved laborers. Optimistic about the future of the memorial, she believes it will aid in correcting the narrative about enslaved African Americans in Charlottesville and educate people about slavery in Virginia.

“I wanted to serve on the committee because I am a descendant and who better to see about our ancestors getting a memorial than their descendants?”

Cauline also believes the memorial will serve as a catalyst for further discovery and learning.

“It will be open for classes to be taught there, for different groups to meet there. There will be an education that goes along with it.”

In addition to the Community Outreach Committee, the university has unveiled the Descendant Project, a research-based initiative led by genealogist Shelley Murphy that seeks to discover the identities of the unnamed enslaved laborers and their descendants. Similarly, nonprofit organization Descendants UVA, provides a space for descendants to meet and aids possible descendants in tracing their genealogy.

The timing of this weekend’s dedication could also reinvigorate conversations about the community’s monuments. There is still much discussion around what the future holds for the city’s two infamous Confederate statues. Although many are eager for the city to push forward with plans to remove them, there has been little public discourse regarding what the removal plans are.

There has also been interest in erecting a monument and dedicating a park to Vinegar Hill. Vinegar Hill, a historically black neighborhood in Charlottesville, was razed in 1964 to make way for redevelopment plans, leaving over 100 Black families displaced. Currently, there is only an obscure commemorative marker and an empty lot on the Downtown Mall to honor the former community. In 2009, a dialogue on race sparked the creation of a Vinegar Hill committee. The group began planning for an official memorial, and the committee commissioned renowned sculptor Melvin Edwards to create a model for the monument, which was unveiled in 2014. Unfortunately, all fundraising efforts have ceased.

Andrea Douglas, executive director of the Jefferson School African American Heritage Center and member of the UVA President’s Commission on Slavery and the University, acknowledges that there is more work to be done.

“The memorial in fact isn’t a one-and-done kind of situation. People don’t point to the 2011 Kitty Foster memorial that occurred [on the South Lawn]. There are several opportunities through the commission that the university has taken advantage of.”

In 2014, the University also memorialized the African American burial site of 67 free and enslaved Black people. In addition, UVA offers a list of on campus locations to rediscover Black history.

“What we’re hoping that we’re ultimately accomplishing is creating a more realistic truth about how Charlottesville developed itself.”