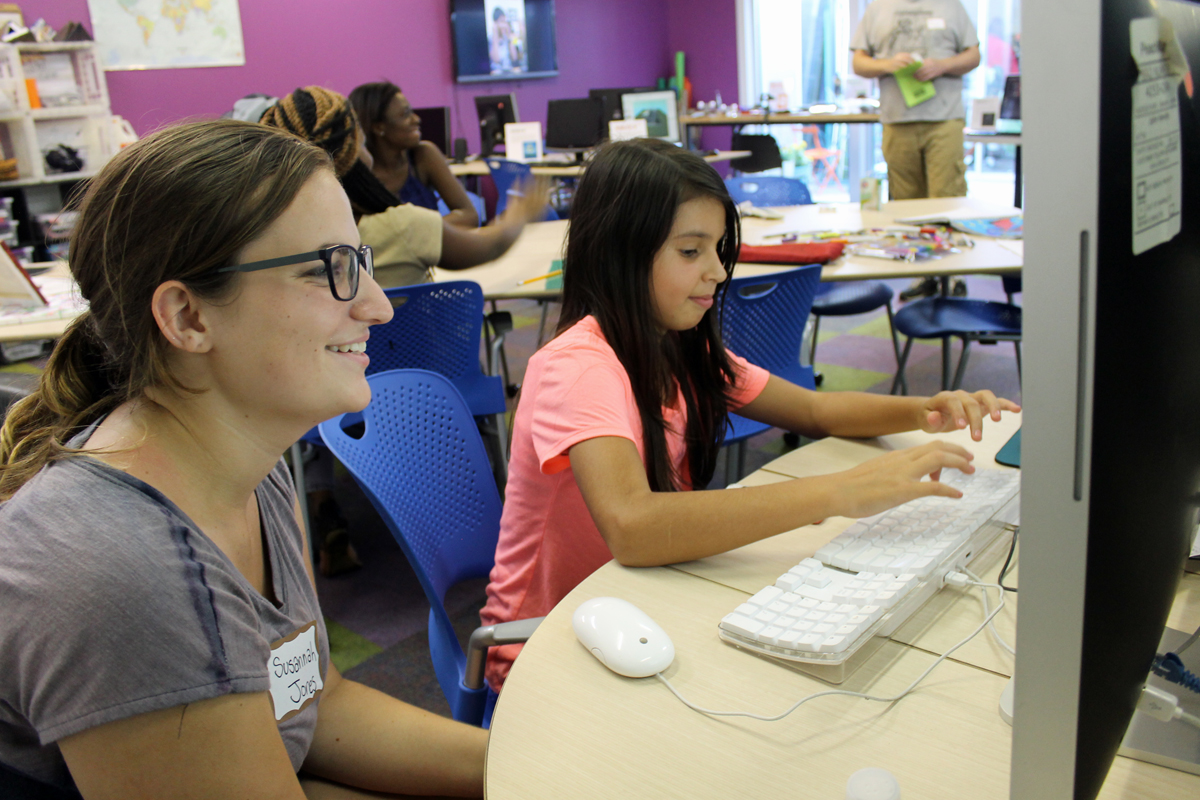 Since 2001, Computers4Kids has helped disadvantaged young people in Charlottesville and Albemarle County experience the thrill of creating things with technology. Many of those “kids” are now successful adults.

“I feel like a proud parent,” said C4K’s executive director, Kala Somerville. “I’m a big believer in the ‘it takes a village’ philosophy. We are not the be-all-end-all, but we provide yet another layer of support and skill-building [for our members].”

At an open house Friday, C4K celebrated the 15th anniversary of its year-round mentoring program, and its new membership in the Clubhouse Network, an international community of more than 100 technology-focused organizations for youth in 19 countries.

The nonprofit officially opened its Clubhouse@C4K at the Ix warehouse complex Friday.

C4K’s mentoring program lets low-income middle and high school students work on a creative project with the guidance of a volunteer mentor each week. C4K members have coded computer games, designed shoes, recorded songs and pursued countless other interests. Members who demonstrate commitment to the program receive a free refurbished computer that they can keep.

C4K also hosts workshops and summer camps, and offers open studio hours for students to use computers and other technology in its Clubhouse space.

More than 1,400 youths have participated in C4K since its founding. Ninety-seven percent have graduated from high school on time and 92 percent have gone to college.

C4K alumna Dilara Urushanova, 22, drove from George Mason University in Fairfax to attend the open house. Urushanova is pursuing a bachelor’s degree in information sciences and technology with a minor in business.

“Everything I do [at George Mason] is related to C4K,” Urushanova said. “I’m really thankful for all the experience and opportunity they gave me. I’m trying to give back to them as much as I can.”

Urushanova joined C4K’s mentoring program in middle school, soon after her ethnic Turkish family immigrated to the United States from Russia in 2005.

Urushanova, her parents and two younger siblings did not speak English when they moved to Charlottesville. “We didn’t know anything about this place,” said Urushanova. “But when we came here there were a lot of programs that helped us,” including C4K, she said.

As Urushanova learned the basics of typing and computing in her middle school classes, her C4K mentors taught her how to build websites. At home, she shared her C4K laptop with the rest of her family.

Urushanova continued to visit C4K in high school for academic support and guidance during the college application process.

“It was a very stressful semester when I was applying to college,” she said. “I felt a lot of responsibility, as the oldest child … I didn’t have anyone in my family who had gone to college, to tell me what to do, or what not to do.”

In the summer before her freshman year at George Mason, Urushanova participated in the Start Your Own Business Camp and Competition, a program organized by C4K and the city of Charlottesville’s Office of Economic Development. Volunteers with business experience helped her to develop an online business strategy to sell the Turkish pastries that she frequently baked with her mother.

Urushanova pitched her plan to a panel of judges that included City Councilor Kathy Galvin and C’ville Coffee co-founder Toan Nguyen. Her presentation, which included samples of her homemade baklava, convinced the judges to award her the $100 prize for first place.

“[The pastries] were delicious,” Somerville recalled. “She was the first student that brought in a sample of her product — a very smart decision on her part.”

Urushanova’s Ahiska Turkish Pastries is on hiatus as she continues her coursework at George Mason. But she said she would like to return to it once she graduates.

Erica Jackson, 26, is also among C4K’s loyal alumni. She became a clinical social worker for the Virginia Commonwealth University Health System after earning a bachelor’s in psychology and a master’s in social work from VCU.

A Charlottesville native, Jackson joined C4K as a seventh-grader at Buford Middle School. She said she was fascinated by her computer programming projects.

“To experience something like that, to learn something that complex at that age, was really interesting,” she said.

“I still think of Kala as a mentor … someone I know I can call and ask for help,” she said.

Somerville said Jackson demonstrated an interest in social work at a young age.

“Erica was very focused and knew what she wanted,” Somerville recalled. “It’s been a pleasure watching her achieve her goals.”

Jackson’s training in psychology and social work has given her an even greater appreciation of C4K’s impact on disadvantaged youth in the Charlottesville area.

“[The program] is geared toward the adolescent period … when they’re not sure which direction they are going and not sure what they want to do,” she said.

“Having a resource such as C4K, at a critical point in children’s personal and academic lives, is imperative for their development as they mature. … There are not many programs around that are like that. I’m glad it’s still going strong.” 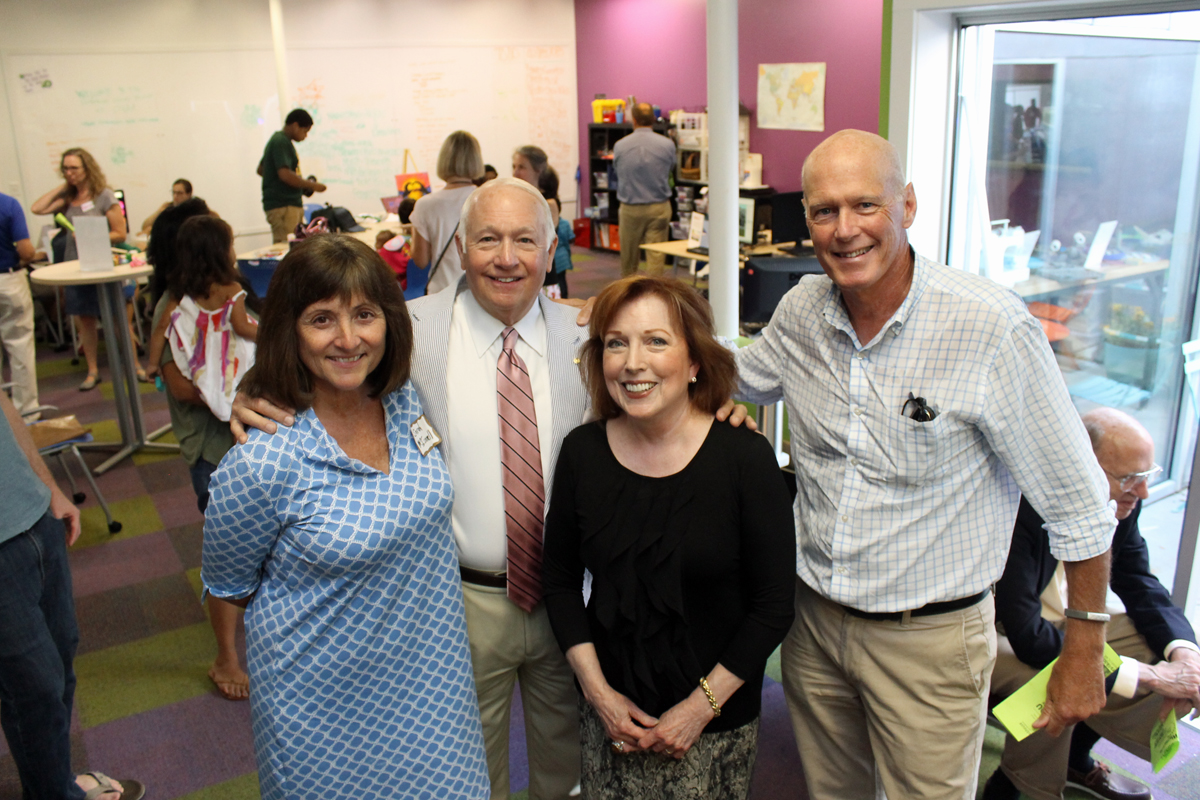