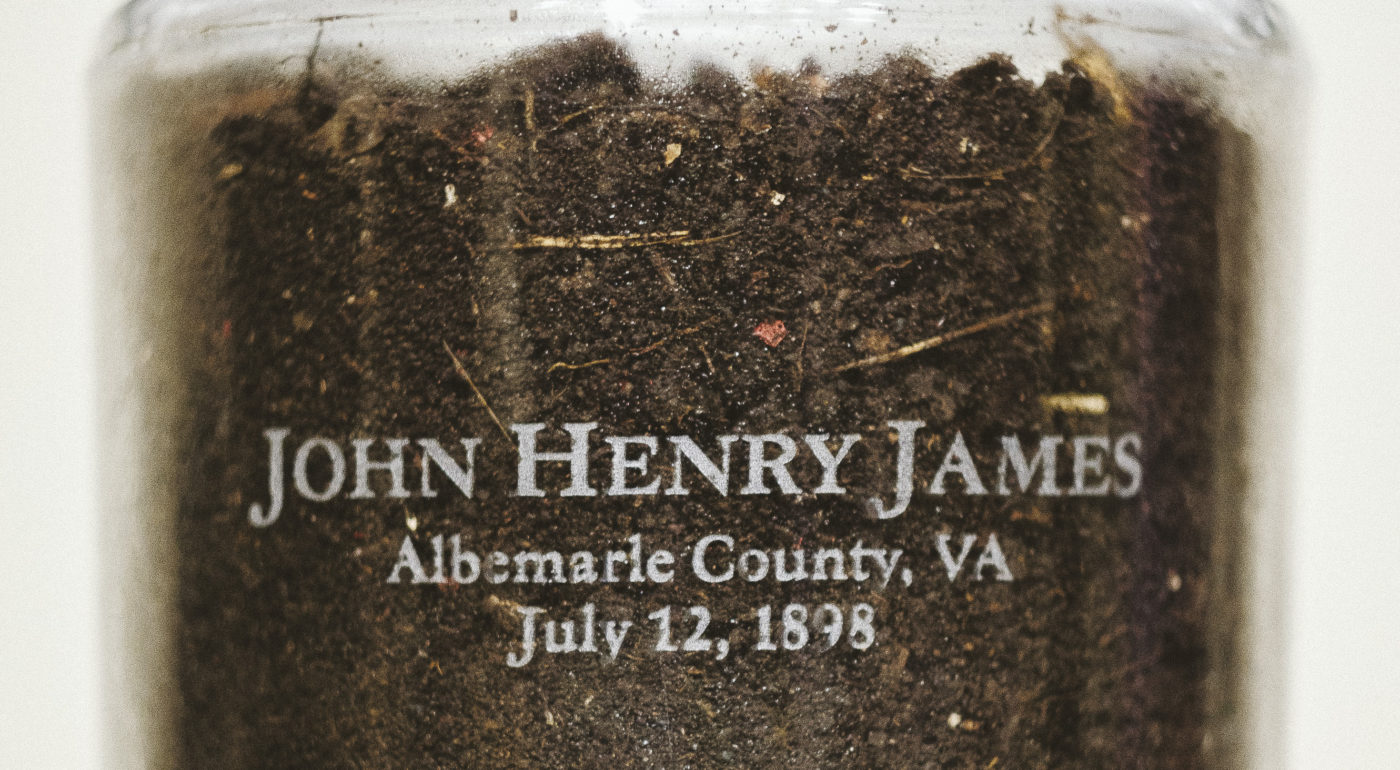 John Henry James, an ice cream salesman in Charlottesville, was lynched by a white mob on July 12, 1898. This jar contains soil from the site where he is believed to have died.

John Henry James sold ice cream. That’s all that’s known about him, except for how he died on July 12, 1898, just a few years after moving to Charlottesville.

James was murdered by a white lynch mob.

More than a century after his death the community in 2019 acknowledged James publicly with a historical marker near the Albemarle County Courthouse in Court Square.

In bronze letters standing in relief on a blue background, it reads:

In 1898, a black man named John Henry James lived and worked in Charlottesville as an ice cream vendor. He had only been a resident of the area for five or six years before July 11th, 1898, when he was falsely accused of assaulting a white woman and arrested. The police transferred Mr. James to Staunton that evening to avoid a potential lynching, but officers escorted him back to Charlottesville the next morning by train. While en route, an armed mob of 150 white men stopped the train at Wood’s Crossing in Albemarle Count, and seized Mr. James. Learning of the mob’s attack, a group of black men tried to stop the lynch mob but were outnumbered and forced to retreat. The white mob threw a rope over Mr. James’s neck and dragged him about 40 yards away to a small locust tree. Despite his protest of innocence, the mob hanged Mr. James and riddled his body with dozens of bullets. The Richmond Planet, an African American newspaper, reported that as his body hung for many hours, hundreds more white people streamed by, cutting off pieces of his clothing, body, and the locust tree to carry away as souvenirs. The grand jury, interrupted by news of the lynching, issued a posthumous indictment, as if Mr. James were still alive. Despite the presence of the Charlottesville police chief and Albemarle County sheriff, no one was ever charged or held accountable for the murder of John Henry James.

Until very recently, that marker stood just yards from two Confederate monuments. One, “At Ready” (or “Johnny Reb”), was of a Confederate soldier standing tall atop a stone pedestal in front of the Albemarle County Courthouse, dedicated in 1909 and removed in September 2020. The other, a massive bronze equestrian statue of Confederate Gen. Thomas J. “Stonewall” Jackson, was gifted to the city in May 1921 and removed in July 2021. 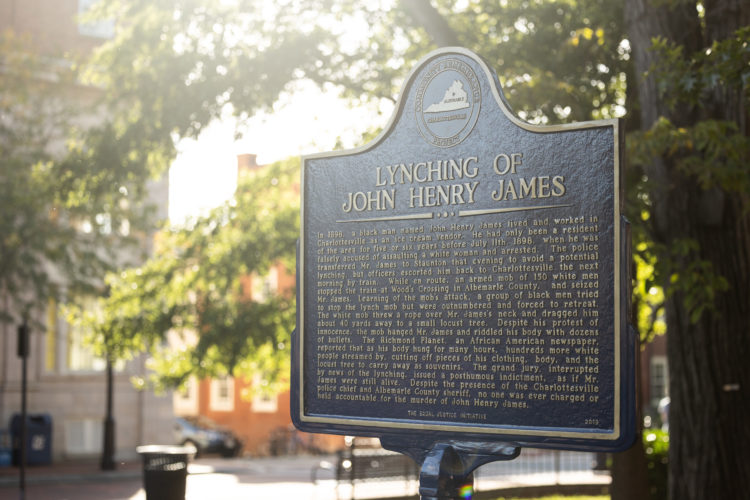 The historical marker commemorating the lynching death of John Henry James was installed in Court Square in July 2019. It is part of the Equal Justice Initiative's Community Remembrance Project.

It took a century after those monuments were erected, but researchers now say that James’ death is connected to Charlottesville’s Confederate statues in ways beyond physical proximity.

“We uncovered a quantifiable relationship between Confederate memorials and the explicitly racist practice of lynching,” University of Virginia psychology PhD student Kyshia Henderson told Charlottesville Tomorrow. Henderson researches the ways in which white Americans perpetuate and try to justify racism.

Henderson is the lead author of “Confederate Monuments and the History of Lynching in the American South: An Empirical Examination,” a study out of UVA’s Department of Psychology, Equity Center, and Batten School of Leadership and Public Policy. It was published Monday in the Proceedings of the National Academy of Sciences, a multidisciplinary, peer-reviewed journal.

The study shows a real and persistent correlation between documented lynchings and monuments.

“We find that the number of lynching victims in a county is a positive and significant predictor of the number of Confederate memorializations in that county,” the study says.

“Many people across the country, including myself, have been tuned into the debate surrounding Confederate memorials over the years,” particularly after the Charleston church massacre in June 2015, Henderson said.

That’s when self-avowed neo-Nazi and white supremacist Dylann Roof shot 12 Black people during Bible study at Emmanuel African Methodist Episcopal Church in Charleston, South Carolina. The church is one of the oldest Black churches in the United States and played an important role in the civil rights movement. Nine of the victims died, including Clementa “Clem” Pickney, the church’s senior pastor and a South Carolina state senator.

“I, like many people, was interested in how these debates were going,” said Henderson, how people, particularly white people, were “supporting Confederate memorials, justifying keeping them in our public spaces. That’s how this started, because supporters brought up history and heritage. We thought it was important to jump in there and understand the history of the Confederate memorial.” 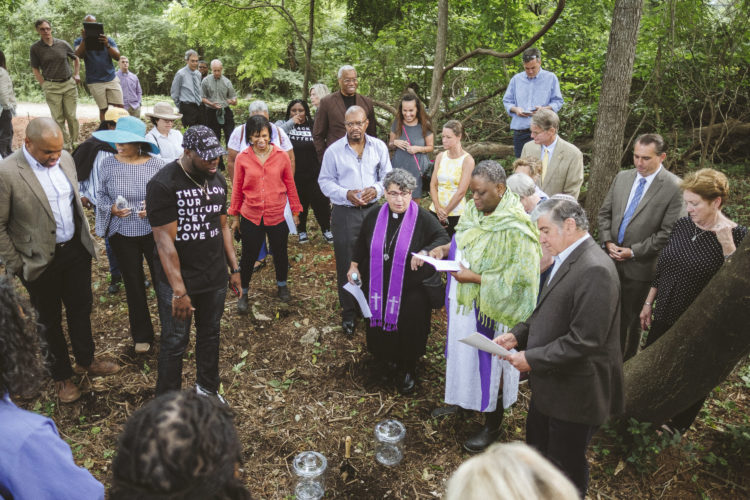 In 2018, community leaders looked on as Reverends Susan Minasian and Barbara Brown-Grooms, as well as Rabbi Tom Gutherz, lead an interfaith prayer near the site where it is thought John Henry James was lynched in 1898.

The team’s thesis wasn’t anything new, Henderson said. “The thought that Confederate memorials are associated with hate isn’t a novel thought. It’s something that activists have been saying for a very long time,” something that, to some, is clear given the known history of Confederate monuments and the history of lynching.

Lynching, the study explains, is “a form of extreme violence wherein mobs viciously execute a person.” Lynchings “became a prevalent practice in the South during Reconstruction. In the South, these lynchings were acts of mob violence intended to maintain white supremacy, suppress civil rights, instill fear and terrorize Black people.”

One example of that aforementioned known history is the fact that the majority of Confederate statues throughout the South were erected during the Jim Crow era, not in the immediate aftermath of the Civil War. Journalist Ryan Best illustrated this well — and with data — in a 2020 Five Thirty Eight article, “Confederate Statues Were Never Really About Preserving History,” said Henderson.

And yet, some people continue to insist that Confederate memorials are about history and heritage, not hate, Henderson and her co-authors point out in the study.

That is indeed what the data showed. 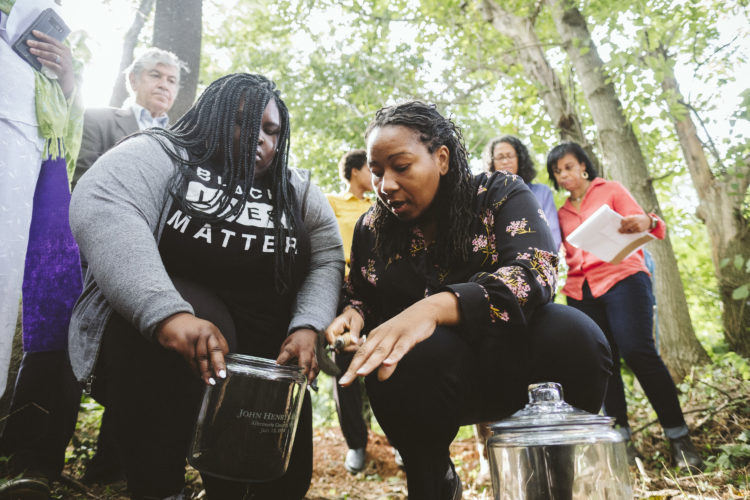 In 2018, local activist Zyahna Bryant (left), who first petitioned Charlottesville City Council to remove the confederate statues, and Mayor Nikuyah Walker (right), the city's first Black female mayor, collected soil from the site where James was lynched. Community members then took the soil on a pilgrimage to the Equal Justice Initiative in Montgomery, Alabama. There, they transferred the soil into another jar etched with James' name and date of death. The jar sits on a wall with others like it, each representing another individual lynched by a white mob. 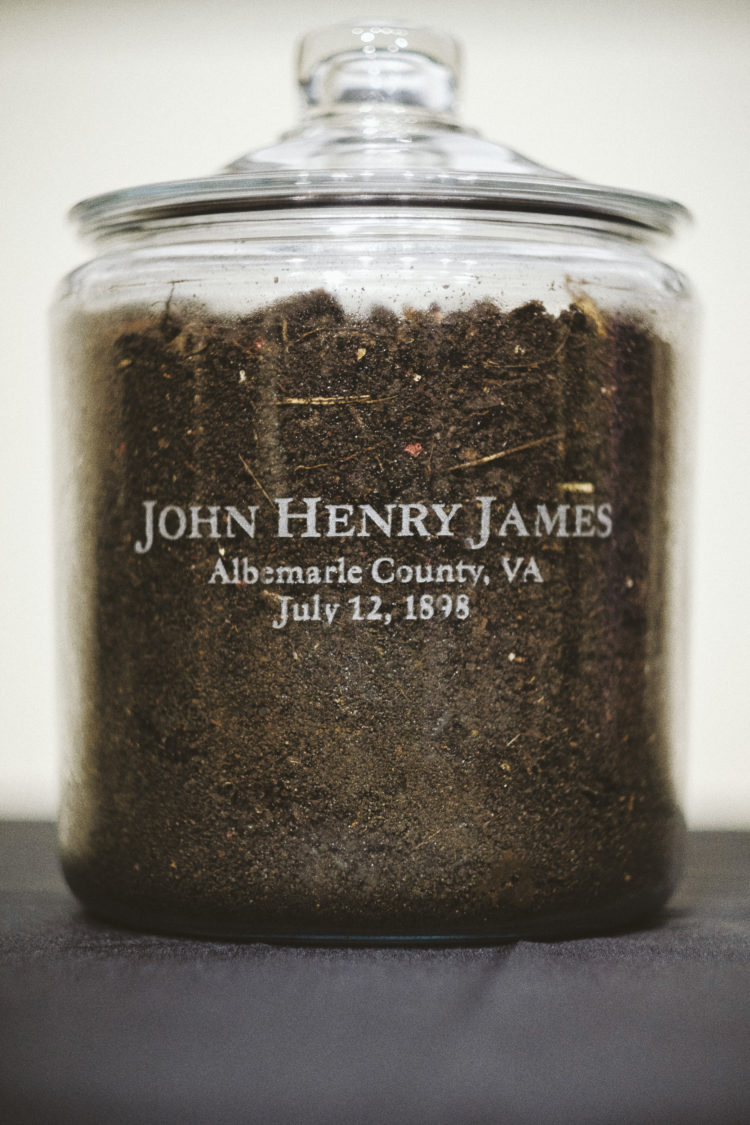 “We do not make any causal claims in the paper,” Trawalter, one of the professors who worked on the study, said in a statement. “We can’t pinpoint exactly the cause and effect. But the association is clearly there. At a minimum, the data suggests that localities with attitudes and intentions that led to lynchings also had attitudes and intentions associated with the construction of Confederate memorials.”

The group chose to focus its research on the eleven former Confederate States of America, which are Virginia, Texas, Tennessee, South Carolina, North Carolina, Mississippi, Louisiana, Georgia, Florida, Arkansas and Alabama “because of the prevalent history of racial violence” in those states, though lynchings certainly took place in other states.

They obtained county-level lynching counts from three different sources (including the county-level registry maintained by the Equal Justice Initiative that documents lynchings between 1877 and 1950) to create a complete-as-possible data set for those eleven states.

They also used county-level counts of Confederate memorializations from the Southern Poverty Law Center’s “Whose Heritage? Public Symbols of the Confederacy” project, accounting for the memorials that still exist as well as those — like Johnny Reb, Stonewall Jackson, and Robert E. Lee in our own community — that have been removed.

The more than 1,500 Confederate memorials the SPLC project has tracked take more forms than bronze soldiers and generals. They’re street names (the most prevalent, a table in the study shows), school names, flags, county and municipality names, government office grounds, and buildings. And since the UVA research used this data set, its findings pertain to those types of memorials, too.

The team found the direct correlation it suspected.

“This kind of work is important, because it takes a debate that feels like two sides, that feels like two equally valid opinions, and contributes by acknowledging that there are empirical questions at the center of these debates. We can start answering these things by an empirical, data-driven perspective. You don’t have to yield to the position that these symbols are not at all associated with hate. We can — and did — test that empirically,” said Henderson.

The paper includes several short summaries on the history of these memorials and lynchings that Henderson hopes people will learn from. 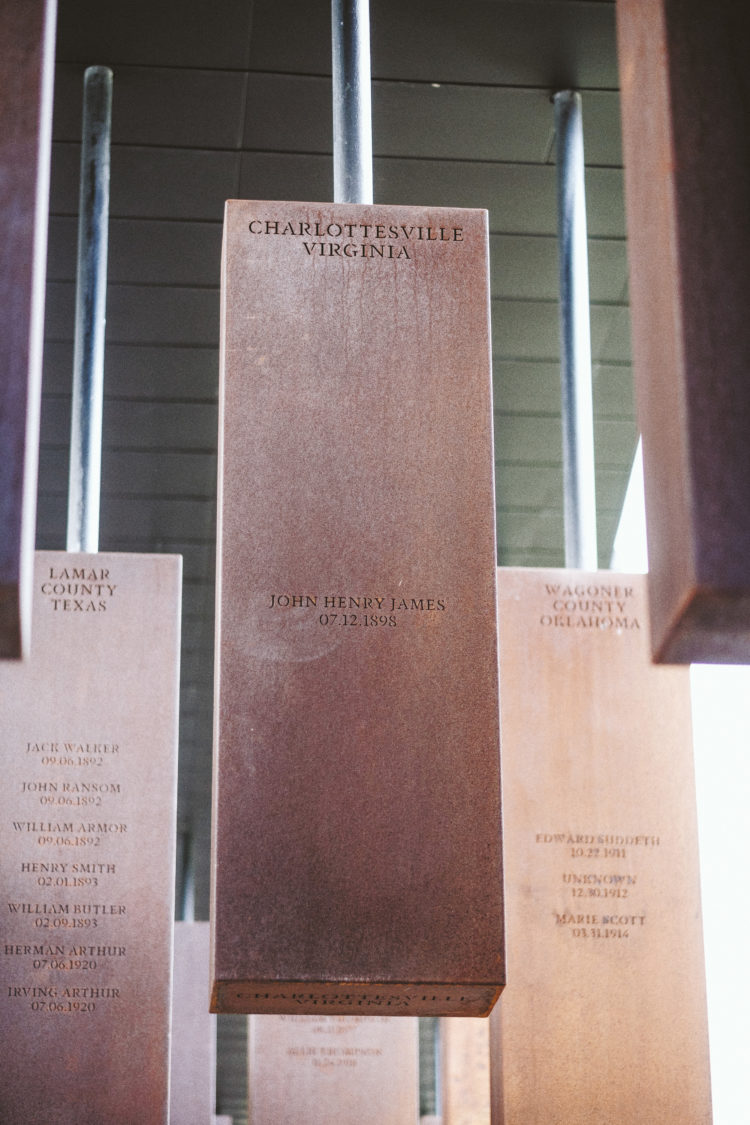 In addition to the historical marker in Charlottesville and the two jars of dirt, John Henry James is also remembered at the Equal Justice Initiative's memorial to victims of lynching. Each slab represents a city and/or county and is etched with the names of the people who were lynched there.

“And we hope that the findings that Confederate memorials are associated with the history of hate, we hope that’s compelling for people that are on the fence about different positions,” she said.

“In thinking about implications for communities grappling with Confederate memorials and what to do with them, we think this work provides some guidance,” she added. “It challenges the narrative that monuments reflect heritage, not hate. It suggests that monuments are associated with hate and extreme violence.

“We hope that this research leads communities to ask different kinds of questions, like, ‘What kinds of statues and memorials do we want in our public spaces?,’” Henderson said.

To questions about who and what we memorialize — for instance, John Henry James, ice cream vendor and victim of hate — and how.

While the study includes an extensive list of references, Henderson here recommends a few that are most accessible to the general public: