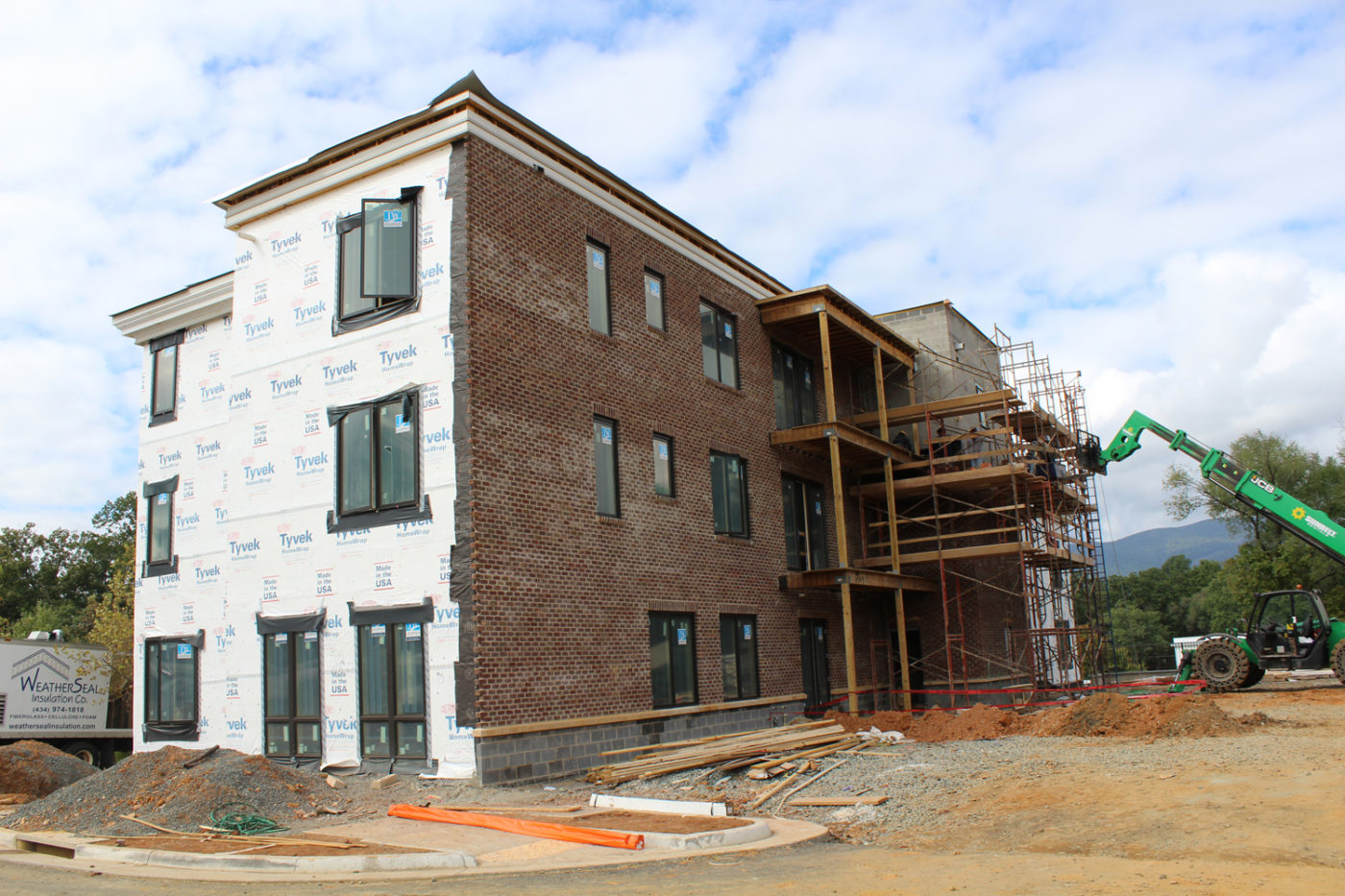 Piedmont Place will be the newest building in downtown Crozet

As Albemarle officials wrestle with increasing population trends, many are watching to see if Crozet’s future will match the vision within its master plan.

“Crozet is and will continue to be a small town with a ‘small town feel,’” reads an aspirational vision included in the plan that was first adopted in 2004 and renewed six years later.

But some longtime Crozet residents are concerned the area might be taking on too much of the county’s anticipated growth.

“If you ask folks that have lived in Crozet prior to being a designated growth area, many of them will tell you the ‘small town feel’ is already gone,” said Jennie More, a member of the Albemarle County Planning Commission.

This year, the proposed Adelaide redevelopment near Cory Farm on U.S. Route 250 also generated opposition from Crozet residents who believed the density requested by developer Kyle Redinger was too high.

“The community has been committed to protecting Route 250 West from development wherever possible and has consistently stated that our downtown is to be the business and social center of the community,” said Tom Loach, a former planning commissioner and longtime Crozet planning activist.

In September, supervisors were asked if they could rezone Adelaide to allow up to six units per acre. The master plan called for a range of between 3 and 6 acres.

Supervisors were divided on the issue and Redinger deferred his application. Meanwhile, a formal review of master plan itself is not scheduled until 2018, so the community wants to take on some of the work itself.

“One reason we’re going to undertake an update of the current master plan is in hopes of clearing up any ambiguity between the language and the maps,” Loach said.

Redinger said he believes he was fulfilling the master plan by bringing Adelaide to the table. Now he is uncertain how he will proceed.

“With the existing Adelaide plan, we’ve offered large cash payments, trails, connections, limits on the developable area, safety improvements, affordable housing units, protection of the entrance corridor and a well-reviewed design,” he said. “Unfortunately, the excessive focus on density, and the desire to reduce it, has unintended consequences of removing the incentive to provide all of the things listed above.”

The reason for a master plan

To prevent rapid development of the rural areas, the county adopted a Comprehensive Plan in 1980 that set aside 5 percent of Albemarle’s 726 square miles for growth.

Even before then, Crozet had been designated for development in 1971. The U.S. Census the year before recorded Albemarle’s population at 37,852 and Charlottesville’s at 39,048.

By the time the Crozet Master Plan went through its first formal update in 2010, the population of the county had doubled to 99,186, while Charlottesville’s had only increased to 43,566.

In February, Albemarle senior planner Elaine Echols told the Crozet Community Advisory Committee that the county estimates there were 6,854 people within 2,753 dwelling units in the Crozet growth area.

Loach said he is skeptical about the county’s numbers and hopes the community’s work on the master plan can shed some light on the future. Part of that work will involve a survey that will be conducted by the Crozet Community Association.

“One issue we have is [with] the household multiplier the county is using to determine the effect of the population for homes approved but not yet built,” Loach said. “We’re hoping to prove that in our upcoming community survey where we will ask for household size.”

One major completed element of the Crozet Master Plan is the new Crozet Library, which recently celebrated its third birthday. Since then, more than 439,000 people have visited.

“As you have probably noticed, there’s a lot going on in downtown Crozet since the library opened,” said John Halliday, director of the Jefferson-Madison Regional Library. “Is it a coincidence?”

Across Library Avenue, construction crews are working on the four-story Piedmont Place, which is being built by developer Drew Holzwarth across the street.

The two buildings complement the completion of both a Crozet streetscape and improvements to Jarmans Gap Road that are intended to make the downtown area a walkable or bikeable destination from neighborhoods like Old Trail and Grayrock to the west.

Construction of Piedmont Place could be seen from the library’s community room on a recent Wednesday while a group discussed the offer by Milestone Partners to build a public plaza of no less than 28,000 square feet as part of the first phase of the redevelopment of the former Barnes Lumber Yard.

“If this is going to be Crozet’s downtown, so to speak, we want it to be a pedestrian-friendly zone where people can park their car and walk wherever they want to walk,” said architect Stephen Kelly, of the Baltimore-based firm Mahan Rykiel.

Milestone hired the company to help design the plaza, as well as a network of streets for the first phase of development.

One of the buildings could be a hotel, according to Frank Stoner, of Milestone Partners.

“We’re confident that a hotel will be part of the downtown if we can provide the infrastructure they need,” Stoner said.

However, Stoner said other investments, public and private, will be needed to lure companies to downtown Crozet.

“The connection to Parkside Village and [other] neighborhoods to the east, a long-range parking plan and another access point from downtown to Three Notch’d Road are all important,” Stoner said.

Even before the lumber yard is redeveloped, the new downtown will cause the need for adjustments as more pedestrians are drawn to the area.

“A car came up Crozet Avenue at 45 miles an hour right in front of me,” said Andy Wright, who works at Staengl Engineering directly below the new library. “It’s a 25 mph zone, and nobody drives 25.”

More said Crozet may not still feel like a small town to some, but there are benefits to living there.

“I think Crozet is a unique place to live and even with all the growth we have experienced, Crozet still has a uniqueness and a small-town-type feeling that we have managed to cling onto,” she said.

Saturday: A snapshot of the master plan