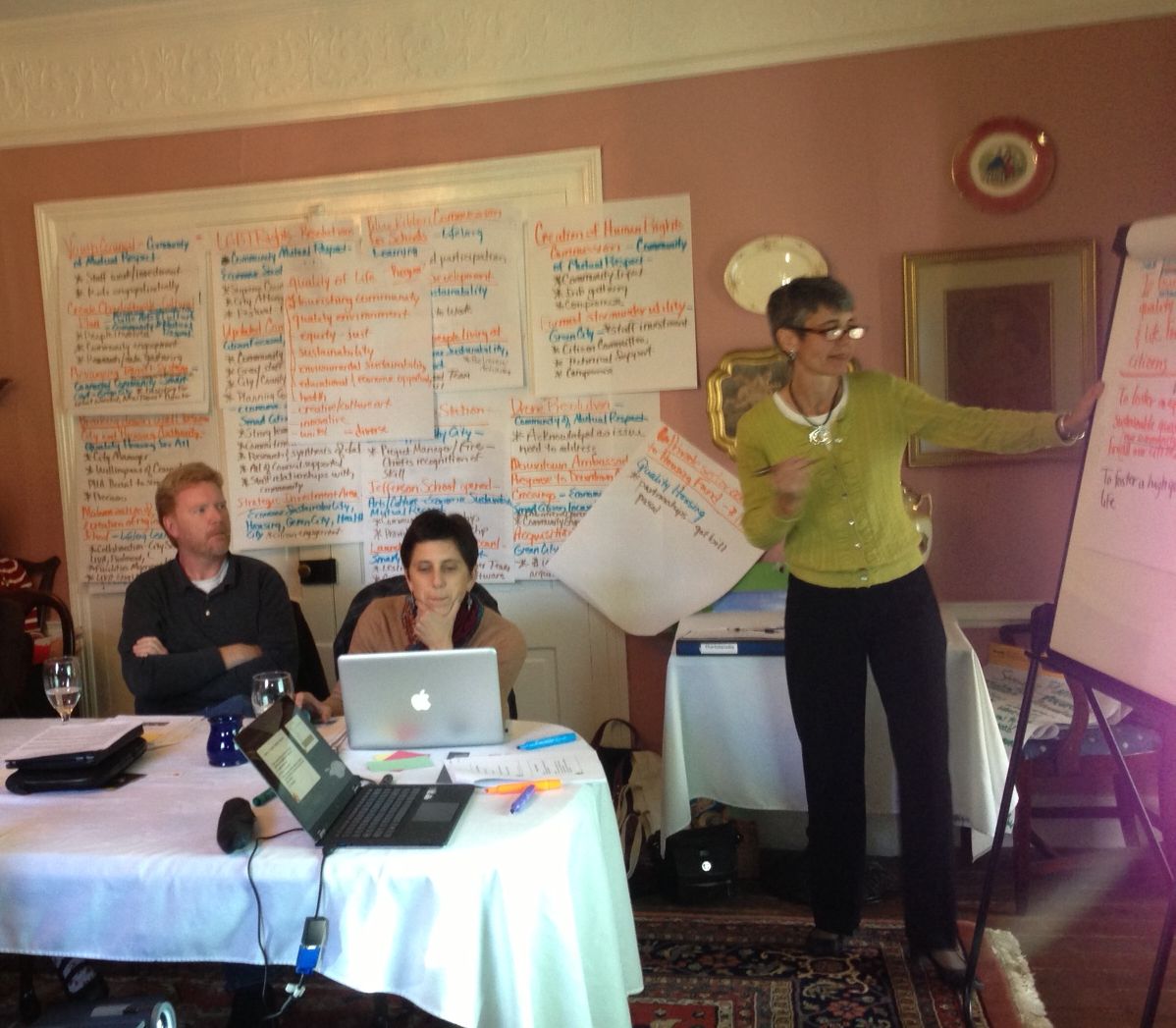 “The City Council, the city’s leadership team and citizens should understand where they are going,” said Dale Johnson-Raney, director of strategy and planning for Zelos, an Alexandria-based consulting firm.

The city has hired Zelos to help develop the plan, which will reconcile several aspirational documents that guide local government decisions. The council held a retreat to discuss the matter at the Prospect Hill bed and breakfast in Louisa County.

The City Council adopted a “vision statement” in 2007 that calls for Charlottesville to be “a great place to live for all of our citizens.” The two-page document lists nine goals designed to direct the priorities of city staff.

They are economic sustainability; a center for lifelong learning; quality housing opportunities for all; Charlottesville arts and culture; a green city; America’s healthiest city; a connected community; community of mutual respect; and smart, citizen-focused government.

“The overarching goal is to bring together all these strategic activities into one comprehensive document that’s a three-year strategic plan that can be incorporated in your operations,” Johnson-Raney said.

Mayor Satyendra Huja said he would prefer a longer horizon.

“It takes a long time to get anything done in Charlottesville,” he said.

Some councilors agreed their plan should be more concise. Dave Norris said he wants to use this process to see if the council’s priorities are truly being reflected.

“A clear sign our strategic plan isn’t effective is that we never refer to it in our City Council meetings,” Norris said.

Councilor Kathy Galvin said the city’s performance measurement system, called Scorecard, should be more aligned so progress toward goals can be tracked. The system was unveiled earlier this year, but is not yet directly aligned with the council’s strategic goals.

“That would allow us to see how we’re doing based on what we thought we were going to achieve,” Ellis said.

“We set it up, which is wonderful, but it will have to align with this to be useful,” Szakos said.

Zelos specializes in working with governments at the local, state and federal level.

Councilors agreed they want to emulate the strategic plan that Durham, N.C., adopted in April with help from Zelos. Johnson-Raney said that plan was more concise and allowed that city to create action plans for specific initiatives.

For instance, Durham seeks to have “thriving, livable neighborhoods.” Potential measurements to track progress toward that overarching goal include creation of a neighborhood vitality index and seeking partnerships to revitalize poor-functioning neighborhoods.

“Our vision areas are their goals,” Jones said.

“We do have a very good vision statement,” Huja said. “It would be helpful if we do not reinvent it, but use what we have.”

Johnson-Raney said the secret to Durham’s plan was to have as few measurable outcomes as possible.

Johnson-Raney said another key to success is to create an implementation team to better ensure that top initiatives are getting resources.

Zelos will work with city staff to develop the plan over the next five months and council will see a draft in March.

The plan also would guide the work of city employees.

“We have 900 people who need to be on the same page, and that’s why this is so important,” Galvin said.

After lunch, councilors were asked to state the accomplishments made in the last year, and how they relate to a specific vision statement areas.

Councilors Dede Smith and Szakos both said creation of a human rights commission was the top accomplishment of the last year, appealing to the “community of mutual respect.”

Huja cited the creation of the stormwater utility fee, and said that was linked to the city vision of having a green city.

Galvin cited the new laboratory space at Buford Middle School, paid for when the council agreed to give a surplus to fund new equipment.

Other accomplishments listed included the opening of the $14.5 million Fontaine Fire Station; passage of ordinances to protect the rights of the LGBT community; opening of the Jefferson School City Center; and formation of the Blue Ribbon Commission to address school funding.