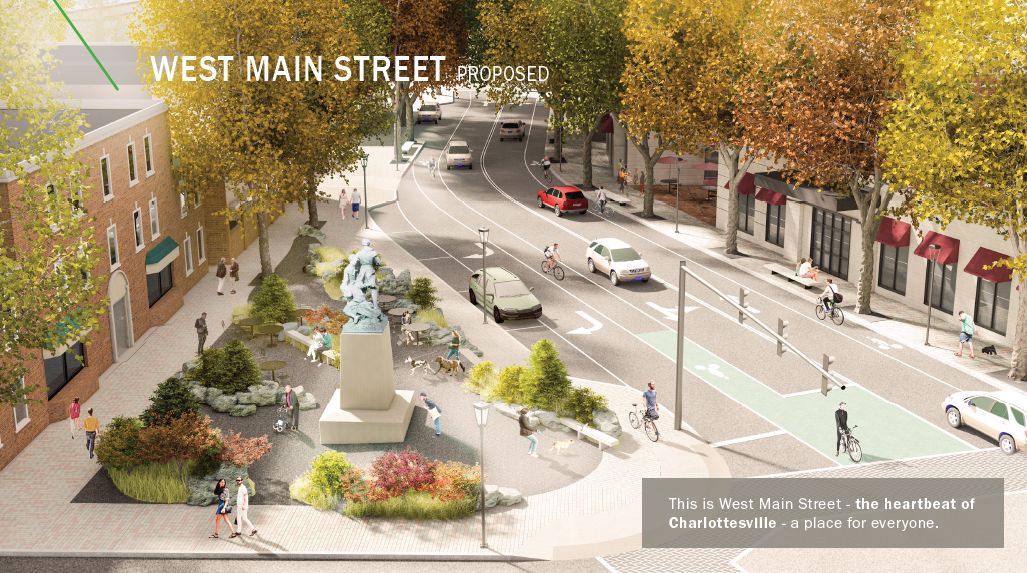 Development plans for a new look for Charlottesville’s West Main Street inched closer to completion Monday when City Council approved a schematic design for the project.

“The project vision is to create a great street, to design a great street and to have it be an equitable street,” said Elliot Rhodeside, of the firm Rhodeside & Harwell. “West Main is an important connection to the downtown, to the University of Virginia and to the neighborhoods that surround it.”

Rhodeside said the goal is to create an “active, pleasant and beautiful place for West Main Street” by improving safety, increasing the number of street trees and placing utility lines underground.

The firm has been working on the streetscape project since the fall of 2013 and has been paid $1.37 million for the study, as well as the first two phases of design. The next two phases, which have no cost estimate, are to detail the design and then to produce construction documents.

The new schematic does revise the implementation cost estimate to $31 million, not including design and engineering fees. That breaks down to $18.9 million for the 12-block long streetscape, $548,896 for stormwater improvements and $11.6 million to place utility lines underground.

That estimate does not include $3 million worth of work to replace water and gas lines on the street.

The council has so far allocated $10 million to the streetscape in the capital improvement program. The city applied for funding from the Virginia Department of Transportation to pay for the difference, but the project did not qualify through the Smart Scale process.

Rhodeside & Harwell would split the work into four phases that would be conducted from east to west.

“I think a lot of sensitivity has gone into a lot of the concerns about how this is embracing historic neighborhoods,” said Mayor Mike Signer, who was on the West Main Streetscape steering committee prior to being elected in November 2015.

Councilor Bob Fenwick voted against the schematic design, consistent with his overall opposition to the project. He has indicated previously that “it’s a beautiful street” that is “working well now.”

“It’s unsafe to bike,” he said. “It has narrow sidewalk. Its pavements are heaving. There are unsightly utilities. There is a monoculture of trees and deteriorating furnishings. It needs a lot of design assistance.”

Rhodeside and his team studied the Downtown Mall, but they are not seeking to recreate the same experience on West Main Street.

The intersection with Ridge Street and McIntire Road would be transformed into what the schematic refers to as Midway Park. The existing slip lane allowing right-hand turns would be turned into a public plaza. The Lewis and Clark Statue would remain in this new park but would be relocated to the center of the plaza.

“Some of the visions and the renderings we’ve prepared as part of the schematic design emphasize West Main Street as a place to gather, hang out, to dine, to meet your friends and a place that is comfortable and beautiful and welcoming to neighbors,” Rhodeside said.

Rhodeside said the design will create safe ways for pedestrians to cross the street and will create new street furniture to encourage people to gather.

“With the new roadway configuration that we’re proposing, we will have the opportunity to widen the sidewalks,” said Ron Sessoms, of Rhodeside & Harwell. “This newfound public space will afford us the opportunity to create new activity zones along the corridor.”

Sessoms said there are currently about 80 trees along West Main Street, but the plan will increase that to 131 trees. Only 14 existing trees will remain. New species will be added and they will be planted using new technology that will prevent roots from infiltrating into water and sewer lines.

“We worked closely with the city arborist to develop a palette of street trees that we can use that will create a sense of place throughout all of the seasons of the year,” Sessoms said.

Existing sidewalks will be replaced with concrete pavers that will be colored differently depending on the section of West Main. The bike boxes at intersections will be painted green.

There will be many types of street furniture, and the schematic design describes where they will be located. New bus shelters will include lighting to make them more safe and visible.

City Councilor Kathy Galvin suggested that future real estate development could help pay for some of the costs.

Several buildings are currently under construction, including the Standard apartment complex and the Marriott Autograph Hotel. Several other buildings are planned, including a mixed-use building where the Blue Moon Diner exists today, as well a Quirk hotel across the street.

“We are cognizant of the need to make the history and the culture an important part of the whole streetscape design,” Rhodeside said.

Councilor Wes Bellamy said he hoped that minority-owned and locally owned businesses can be hired to do the work.

“In order for us to change the dynamic in this city, we have to keep those things in mind,” Bellamy said.

The streetscape will be discussed on Thursday at the meeting of the Planning and Coordination Council, a body made up of city, county and University of Virginia officials. The meeting begins at 2:00 p.m. in Zehmer Hall.