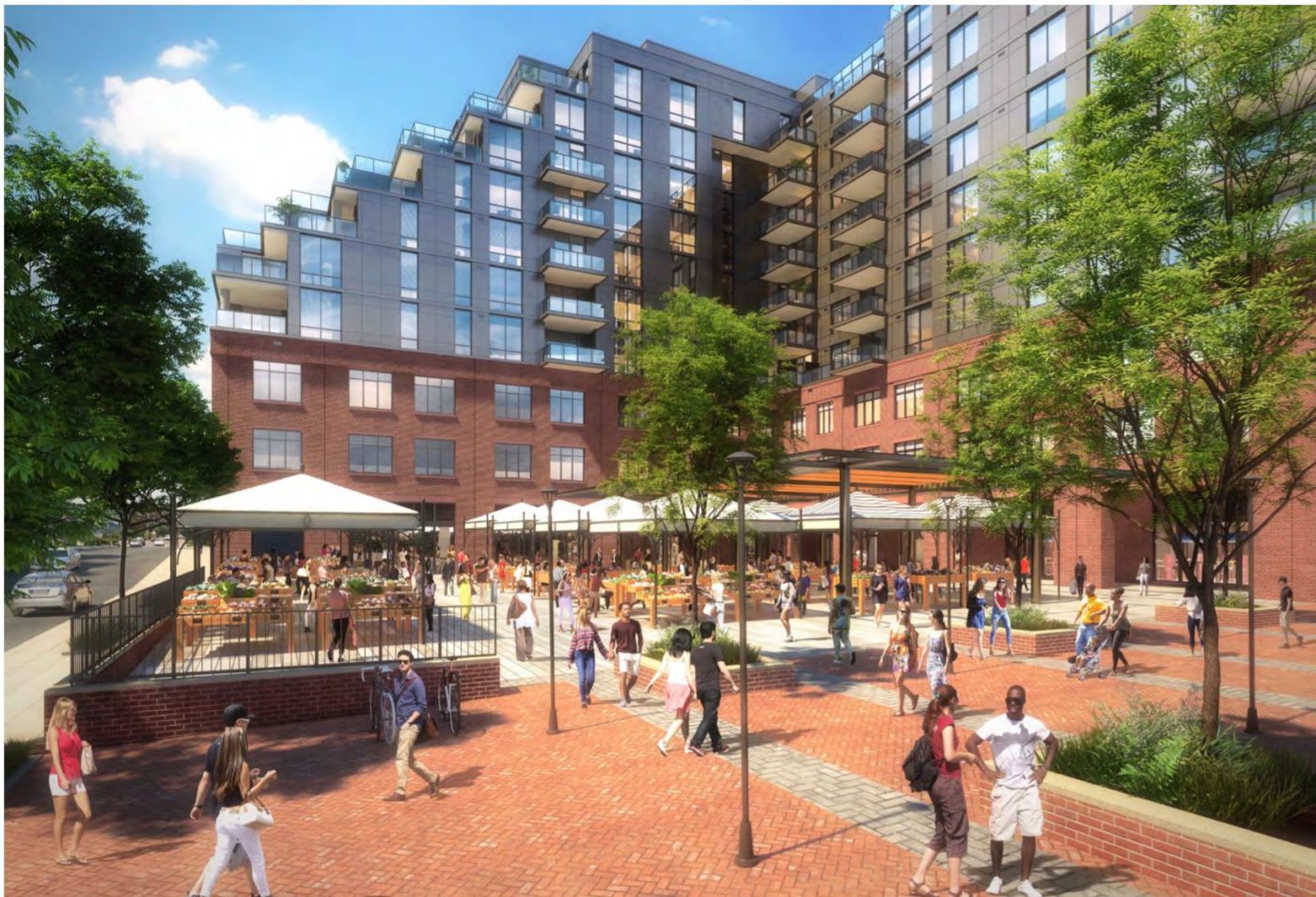 Rendering of West2nd on market days

The future of a project to develop the City Market into a mixed-use facility is in doubt now that the Charlottesville City Council has denied developer Keith Woodard’s request to allow more height and residential density.

“I’m not convinced that the market will thrive given the constraints,” said Councilor Heather Hill, who joined Councilor Wes Bellamy and Mayor Nikuyah Walker in denying an amendment to a special-use permit first approved by the council in December 2014.

The market has operated on a city-owned parking lot on Water Street since 1993, and for much of that time there had been hopes of finding a permanent home for one of Charlottesville’s traditional gathering places.

A task force in 2011 studied several options for a new location but Chris Engel, the city’s economic development director, said they recommended staying downtown. The council hired a consultant to review the task force’s work and concluded that the city is not big enough to support a market district similar to those in larger places.

“Another piece of his assignment was to look at the current piece of property that the city owns and determine what could be done to give the city some options,” Engel said.

When a plan came back for a $4 million upgrade to add bathrooms, electricity and other amenities, the council opted to take another route.

“They decided to do a request for proposals to basically see what the development community could produce as a solution to a very vexing problem,” Engel said.

Engel said they also were asked to envision a “vertical, mixed-use development” that also accommodated the market and public parking spaces.

In the summer of 2014 with four responses on the table, the council selected Woodard’s proposal for a nine-story L-shaped building that would have 50,000 square feet of office space, retail space and 68 luxury condominiums.

Work to place utility lines underground began in April 2016 and the city contributed $1.25 million to the $3 million cost.

The site plan for the project was approved last July but Woodard returned to the city with a request to add one floor to the project. They also sought additional residential density to help improve the project’s finances.

“Our [construction] bids came in way above what was feasible,” said David Pettit, the attorney who represented Woodard before the council. A new plan was developed with one fewer underground parking level and with one office level converted to residential.

In December, the city Planning Commission opted not to review the request for additional height but did recommend allowing an increase in the residential density.

Kathy Galvin is the only member of the council remaining from the time of the original approval.

“At that time, the public good that this community demanded was that the City Market be downtown on that site,” Galvin said. “It was not affordable housing. That was not the community’s demand. Today, it’s different.”

Woodard could have paid $316,000 into the city’s Affordable Housing Fund but wanted to provide units under both the U.S. Department of Housing and Urban Development’s guidelines and the city’s affordable housing ordinance.

“What was proposed by [housing coordinator Stacy Pethia] was that rather than have 16 units for 4.7 years, we would have eight units for 10 years,” Woodard said.

During the discussion, Bellamy asked if all 16 units could be kept affordable for 20 years.

“Whenever we begin to create housing that is supposed to be top-notch and high-level, very rarely do individuals from low-income communities have the opportunity to take advantage of such,” Bellamy said.

Woodard responded that the project would not be financially feasible. To get financing, developers must demonstrate to lending institutions that they will be repaid.

Bellamy then asked if Woodard would commit to 10 affordable units for 20 years. Woodard said he would be willing to do more than is legally required.

“The way the calculations worked out were that it would be four units for 20 years and I offered five units for 20 years,” Woodard said. “The higher the number [of units] goes, the less chance that Harris Street would be built. I don’t want to be in the position of being like everyone else and just putting the money into the Affordable Housing Fund.”

“Some would say you have made a lot of money in this city and because you have already made so much, maybe you could give one back to us,” Bellamy said.

Bellamy asked how the city would benefit from granting further approvals on the project. Woodard said the additional tax revenue could be spent by the council however it sees fit and added that there would be economic benefit to having more than 100 new residents downtown. He committed to making eight units affordable for 15 years.

“You got my attention with eight units at 15 years,” Bellamy said. “So, let’s close the deal, Keith.”

Galvin made a motion to approve the permit and Signer seconded. When someone in the audience expressed displeasure, Walker called a five-minute recess.

After the recess, Galvin said the project met the spirit of the city’s Comprehensive Plan, complied with zoning and would provide an economic benefit for the city.

“I want to hear him say no,” Bellamy said shortly before the vote was taken and the permit request was denied.