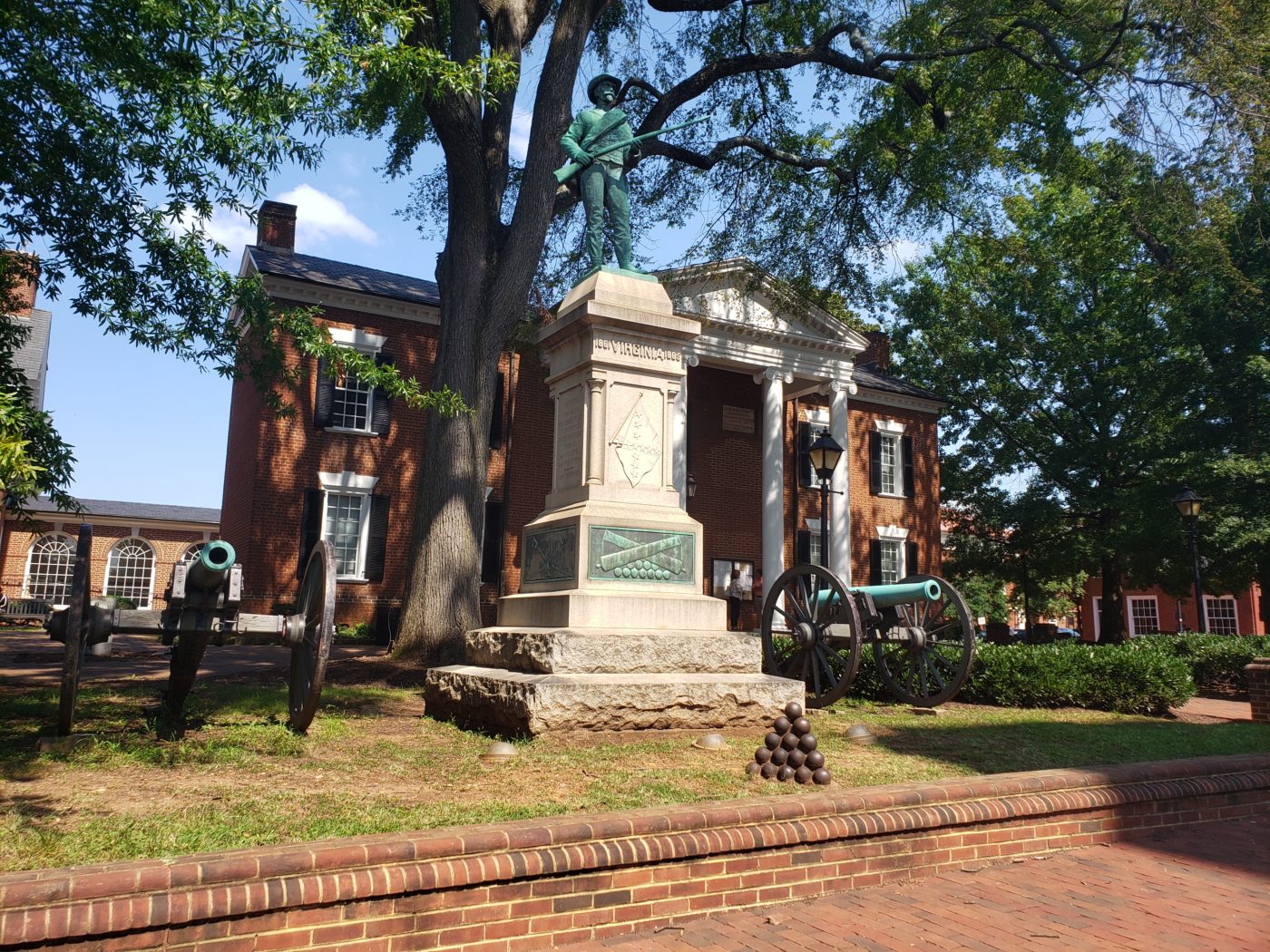 The new home for the ‘Johnny Reb’ statue that sits now before the Albemarle County Courthouse will be the Third Winchester Battlefield historical site, managed by the Shenandoah Valley Battlefields Foundation.

The Albemarle Board of Supervisors voted unanimously Tuesday to give the statue, along with the two cannons and cannonballs, to the foundation after they are removed from Court Square on Saturday.

“I just can’t imagine a better place for this to go than the Shenandoah Valley battlefield,” said Supervisor Liz Palmer. “I can’t imagine us figuring out a better place closer by for it to go. I think we have so many challenges that are facing this county right now that staff and board and we all have to address that I would rather just move on, get this done with and move the statue while we have a credible taker to put it in a good place.”

The board selected the Shenandoah foundation from a list of eight groups and one individual that expressed interest. Most of the offerors wanted only the cannons and cannonballs — not the mass-produced bronze statue of an unnamed Confederate soldier.

The Shenandoah foundation plans to place that bronze soldier on the Frederick County battlefield to “mark the location where Virginia Troops fought and died for Virginia on that particular field,” according to the group’s proposal submitted to the county Aug. 19.

The statue would be re-dedicated as “The Virginia Monument,” something for which several supervisors expressed approval.

“An interpretive marker would be installed nearby relating the history of the monument itself and recognizing its significance and detailing its journey to the battlefield,” the proposal said.

Albemarle’s Confederate monument also contains a time capsule in a bronze box within the soldier monument, which officially is known as “At Ready.” The University of Virginia’s special collections department will temporarily take charge of that capsule, said Trevor Henry, the assistant county executive.

“They’ll go in and review what has survived,” Henry said.

The Shenandoah foundation requested the items from the capsule be given as a “permanent loan” to the group for archival and, eventually, display at the foundation’s museum in Winchester.

Regardless of whether the group takes the items, it plans to rededicate a new time capsule in the statue with items Albemarle may help select.

As Confederate heritage groups, the Gordonsville Grays and the Sons of Confederate Veterans both wanted to remove the statue, cannons and cannonballs to a monument on private property.

Most of the other groups wanted just the cannons and cannonballs to adorn various war monuments. The Petersburg Federal Correctional Complex, for example, wanted the cannons for a monument it is building to mark a Union fort that once stood where the prison now sits along the Appomattox River in Prince George County. That fort — Fort Converse — was built by “the 4th and 6th United States Colored Troops,” the prison’s offer proposal read. 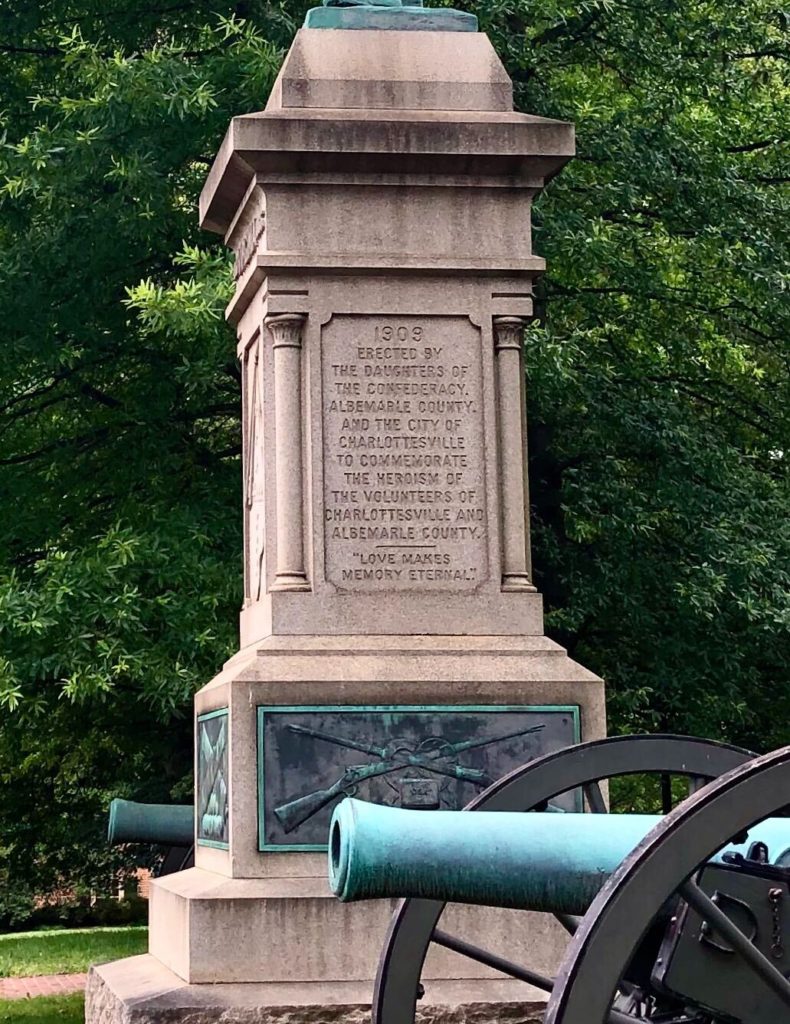 Two Albemarle board members wanted on Tuesday to delay deciding what group they would give the monument to, and instead store it.

Supervisor Diantha McKeel said the plaques and inscriptions around the base of the monument are an important part of Albemarle history, and that she would want the board to consider keeping them to one day create a contextualized historical exhibit.

“Those panels, once they’re gone, they’re gone,” she said. “To me, they’re part of our Albemarle County history. I’m in favor this weekend of taking the statue down. We need it out of our courthouse space. But I’d like to consider storing it to give us time for a more in depth conversation about what those panels mean.”

Other board members, however, were against the added expense the county would incur storing the monument. They were also concerned that postponing the decision could lead the Shenandoah foundation to lose interest.

On Saturday, the Shenandoah Valley Battlefields Foundation will be on site and take the statue, cannons and cannonballs immediately.

The public will not be allowed to view the removal in person, due to a county ordinance limiting gatherings to 50 people. Instead, the county will livestream the event.

“It’s going to be like the Olympics, where when there’s action, cameras are going to be placed to have the best view,” said Emily Kilroy, county spokeswoman. “When there’s not a lot of action, we’re interviewing a lot of people in the community who have subject matter expertise. It’s going to be a rich experience if you’re watching from home.”