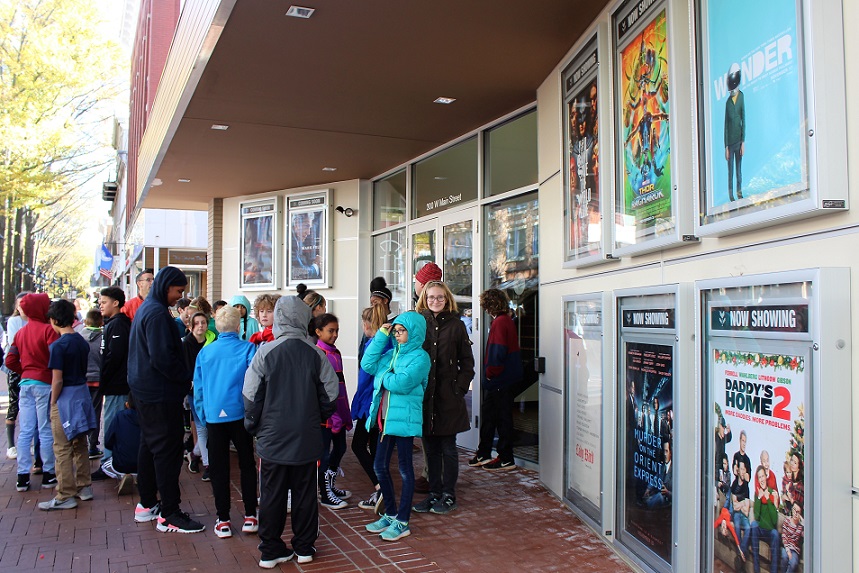 Albemarle County middle school students are flooding local movie theaters this week to see a new film about bullying, and how it can be prevented.

“Wonder” follows Auggie Pullman, a fifth-grader with congenital facial deformities, as he confronts bullies and finds friends in first year of mainstream schooling. Based on R.J. Palacio’s 2012 novel of the same name, the film grossed $27.1 million in the U.S. last weekend, exceeding projections by industry analysts.

“‘Wonder’ is about opening our hearts and being empathetic — something we try to teach at Burley,” said Debbie Baker, a sixth-grade teacher at Burley Middle School. “Everyone feels abnormal in middle school. It’s important for students to realize that.”

Burley and Henley Middle schools are leading schoolwide trips to watch the movie in local theaters this week, while other schools are planning to do so later this year.

Burley eighth-grader Makailah Harmon said she was moved by Auggie’s perseverance in the face of hostility and alienation by his classmates.

“Auggie was really strong,” Harmon said. “He knew he was different, and he still tried to go to school and make friends. He didn’t quit. He was a nice person, and he deserved to have a lot of friends.”

“Since then, we had been waiting for the next good movie to come out,” said Tireese Lewis, assistant principal at Burley. “It’s a good way to educate students about school climate issues, and the world around them.”

Lewis said Burley’s Equity and Diversity Committee chose “Wonder” for its message about kindness and inclusivity.

“We want to have an environment that is conducive to learning for all people,” Lewis said. “Whenever [bullying] is brought to our attention, we immediately take action.”

Characters in “Wonder” respond to bullying in a variety of ways and see different consequences from these actions.

One of Auggie’s friends is suspended from school after punching a bully in his defense. Later, the bully is suspended when Auggie tells his principal about the harassment he has endured throughout the year.

Harmon said she would urge fellow students to seek help from adults when experiencing or witnessing bullying.

“Tell your parents, a principal, somebody that you can go to for help,” she said. “Don’t just let it happen.”

In, “Wonder,” one of Auggie’s teachers shares a famous quotation with his class: “Be kind, for everyone you meet is fighting a hard battle.” Along with Auggie’s obvious difficulties at school, the film explores other characters’ hidden struggles and how they influence their behavior.

Eighth-grade teacher Doug Mullinex said the most valuable lessons his students can learn from “Wonder” are related to these examples of empathy. “Middle schoolers need all the help they can get with that,” he said.

Burley’s program was inspired by the work of Dan Olweus, a Norwegian psychologist who pioneered systematic research on bullying and school safety in the 1970s. Since 2007, teachers at all Albemarle County middle and elementary schools have been trained in the Olweus Bullying Prevention Program.

While Albemarle middle schools continue to provide direct instruction in bullying prevention, Mullinex said he has observed a shift towards more subtle character education lessons, such as this week’s movie screening.

“We talk more about inclusiveness, rather than simply pushing an anti-bullying message,” he said. “The program is way more proactive than it used to be.”