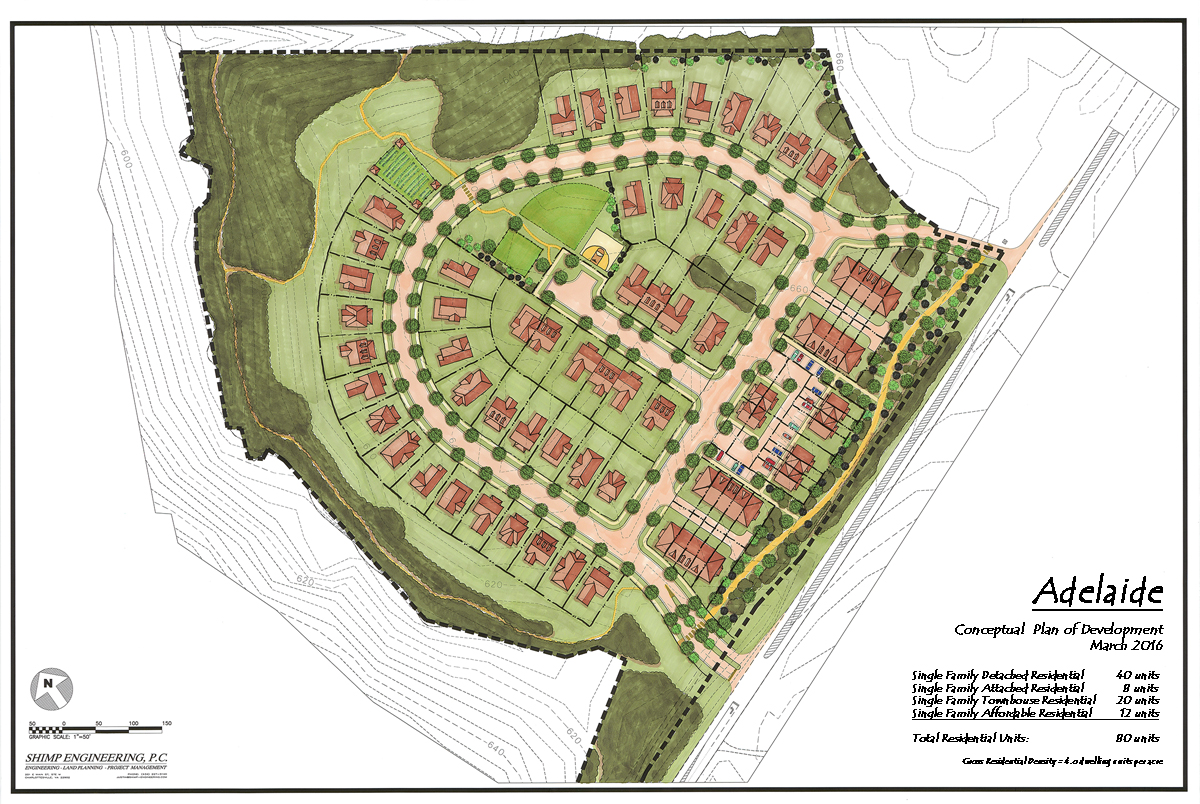 A proposed 80-unit development off U.S. 250 in Crozet cleared a regulatory hurdle Tuesday as the Albemarle County Planning Commission approved a rezoning request related to the project.

The commission voted, 5-2, to approve rezoning the 20-acre Adelaide development site from its by-right one-unit-per-acre zoning to six units per acre. Commissioners Mac Lafferty and Jennie More voted against the proposal, saying the density violated the Crozet Master Plan.

“I think going against the Comprehensive Plan and the Crozet Master Plan sets a dangerous precedent and we are deliberately setting up a safety issue on [U.S. 250],” Lafferty said. “For anybody in this development to use any of the facilities around it or in Crozet, they have got to get in a car and drive there, so I don’t think it’s appropriate.”

The county Comprehensive Plan calls for a maximum density of three to six units per acre in the area Adelaide occupies. The development sits just west of the Harris Teeter shopping center and the Cory Farm subdivision along U.S. 250.

Prior to Tuesday night’s meeting, developer Kyle Redinger took the plan before the Crozet Community Advisory Council three different times. The advisory council last week passed a resolution opposing the development on grounds that its density violates the Crozet Master Plan and that it will add a dangerous volume of traffic to U.S. 250.

The reductions did not satisfy the Crozet council.

“Since the entrances/exits for Adelaide are on U.S. 250, it will add a significant amount of vehicular traffic on a portion of Route 250 already congested, particularly during school opening and closing times,” the May 5 resolution read. “The CCAC is concerned about pedestrian safety in this area.”

“What we have here is a failure to communicate,” Loach said. “We have had the applicant in front of the CCAC three times, and each time … he has come back with not much difference.”

The Adelaide plan includes a multi-use trail running in front of the development within a 40-foot to 75-foot buffer of trees. The path will eventually connect to sidewalks along U.S. 250 that run to the Harris Teeter.

“That has been part of our mission from the beginning, to provide those homes, or to provide the cash for those units,” Redinger said.

With Tuesday’s approval, the Adelaide rezoning request will now be put before the county Board of Supervisors.