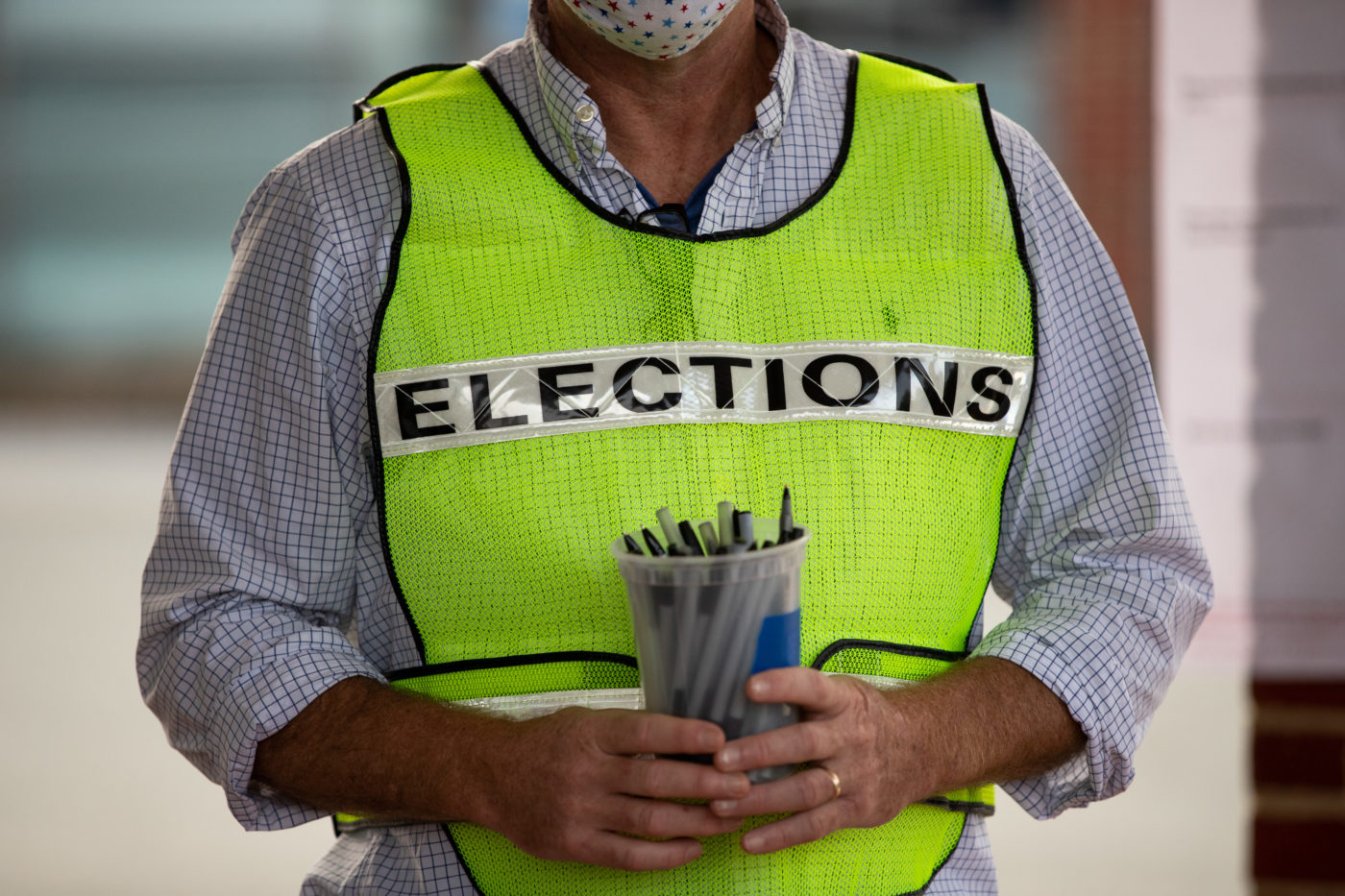 An election worker prepares to hand out pens at Albemarle County's office building at 5th street during early voting.

Partisan politics and national issues have seeped into what was once an uncontested race for Albemarle County School Board.

Randy Zackrisson jumped into the race for the Samuel Miller District seat on the school board in late August as a write-in candidate because he feared critical race theory was being taught in Albemarle County Public Schools. He is now trying to unseat two-term board member Graham Paige.

Zakrisson said he was inspired to run by something he saw play out in Loudoun County in the summer. A school board meeting there filled with parents opposing a proposed transgender policy. That northern Virginia locality meeting became disorderly and ended in an arrest and an injury. Many of those parents were also there to discuss critical race theory.

Critical race theory is a legal framework taught at the collegiate level that explores how systems and institutions have disadvantaged people based on their race. It also shares an acronym, CRT, with a certification program that ACPS uses — Culturally Responsive Teaching.

Zakrisson poked around at Albemarle’s school division’s curriculum and worried he was seeing critical race theory in the form of a pilot program at his granddaughter’s middle school.

Paige said the program’s goal is to “make students appreciate differences in races and different cultures.”

In the aftermath of the murder of George Floyd in May 2020, companies, organizations and educational systems began implementing anti-racism policies or anti-bias trainings nationwide. But Albemarle County Public Schools was ahead of the curve. It adopted an anti-racism policy in 2019 and was one of the first school divisions in Virginia to do so.

Paige called that one of his proudest moments as a school board member.

However, Zakrisson and his supporters are concerned that the programs align too much with CRT and are “teaching kids what to think, not how to think.”

Local conversations about CRT began in Albemarle over the summer as the school board was preparing to vote on a completely different policy addressing transgender or nonbinary students in order to be in compliance with new state law. Similarly to how in Loudoun County months before, public comment was flooded with parents opposing the policy or opposing critical race theory.

“When we get into this buzz about people being confused about what CRT means, it’s an absolute insult to our intelligence,” said Nicki Athey, an area resident involved with the group Citizens Advocating for Responsible Education (C.A.R.E.), which has endorsed Zakrisson.  “No one is saying ‘you’re teaching a college-level CRT class.’ That’s not what’s happening. It’s the cited sources. You’re setting a foundation that is based on those theories and practices.”

C.A.R.E.’s website points to how documents that are part of the division’s anti-racism policy include cited sources they find problematic. An example includes a paper written by University of Columbia professor and lawyer Kimberlé Crenshaw by way of a packet from Safehouse Progressive Alliance for Nonviolence — a Colorado-based nonprofit organization that offers anti-racism training.

Paige said he feels the concern around whether critical race theory is being taught has been a flame fanned around the country by conservative media outlets. He referenced several Breitbart News articles about alleged CRT in school divisions around the country — including several about ACPS. He also noted how an article in The Federalist connected various anti-bias trainings, recommended reading on county school websites and local policies in school divisions around the state to critical race theory.

“It’s all saying that we were teaching critical race theory, and it’s really gotten to be a huge uproar in Loudoun County,” Paige said. “It’s an ongoing trend.”

However, Stephen Farnsworth, a political science professor at University of Mary Washington, said that emails and public comments during school board meetings may not represent a majority opinion come Election Day.

“It’s important to remember that the loudest voices are not necessarily representative,” Farnsworth said. “The people who take it upon themselves to scream at school board meetings in Virginia, polls show, do not represent a majority of where Virginians are.”

Amanda Moxham, a county parent involved in a group called Hate-Free Schools Coalition said that she knows the efforts to bring an equity and racial lens to the division are “going to be messy.”

“The biggest takeaway I hope students and parents can acknowledge is that ACPS still has a long way to go, but they are moving in the right direction,” she said.

The Hate-Free Schools Coalition has also endorsed Paige. The group commends his contributions to the board and say that his perspective as both a longtime teacher and a Black man who grew up during segregation is helpful in crafting policy.

“Mr. Paige grew up in Albemarle County during school segregation and he was a classroom educator,” Moxham said. “His perspective is vital to the ongoing work to expand our historical narrative and focus on anti-racism and equity.”

While Paige has won against challengers in two previous elections, and election data in recent years has shown Democrat candidates faring well in the Charlottesville and Albemarle area, local races aren’t generally included in statewide polling. 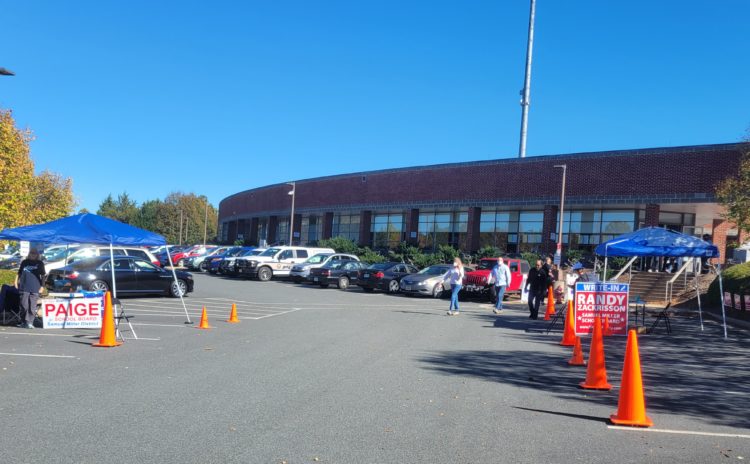 Volunteers from the local Democratic Party (left) and Republican Party (right) display large signs for Paige and Zackrisson outside of the county's office building at 5th street during early voting.

School board races are meant to be nonpartisan. But partisanship is still finding its way into them.

Paige is listed among the democratic candidates on Albemarle County Democratic Party’s website and he serves on the steering committee as vice-chair of outreach for the party.  Meanwhile, ensuring schools do not teach critical race theory — a pillar of Zackrisson’s campaign — is a common component of many Republican campaigns this year.

“There’s an old saying that all politics is local, but in 2021 it seems like all politics are national,” Farnsworth said. “Even in local school board races you’re seeing local candidates talk about gender bathrooms and critical race theory rather than school bus routes.”

It’s an issue that is happening nationwide.

Since last summer, Seattle-based activist and journalist Christopher Rufo has documented what he believes is critical race theory appearing in education and government systems around the country. An appearance on Fox News led to a meeting with former president Donald Trump. Further coverage of critical race theory continued primarily on conservative media outlets leading into Virginia’s 2021 elections.

While discussing education policy goals at a rally on Oct. 23, Republican gubernatorial candidate Glenn Youngkin’s promise to “ban critical race theory” was met with one of the largest cheers of the night. He also encouraged the crowd to be sure to vote for their house of delegates candidates and local races like school boards.

Youngkin’s latest ad also taps into parental voice in education and features a Northern Virginia parent who opposed her son’s high school advanced placement reading material in 2013 due to violent plot points. The book in question was “Beloved,” a Pulitzer Prize-winning novel by Toni Morrison that violently explores the psychological effects of slavery.

Athey said that while her group is hyper-focused on local issues, the fact that the same debate is surfacing in a state-level election is “helpful to the cause of the parents here because it shines a light on this.”

While C.A.R.E. tries to be apolitical, the group did decide to endorse write-in candidate Randy Zakrisson and a few members of the group have been helping out with his campaign, she added.

Ultimately, she said, one of the biggest concerns C.A.R.E. and Zakrisson have had is communication between the division and parents. Athey called the transgender policy review period a “microcosm of things that have happened over and over.”

Athey was frustrated by the board’s decision to limit public comment in a lottery system at a public hearing over the summer. And email exchanges with administration pointed to a Frequently Asked Questions Page she considers skewed in the policy’s favor. She and some others worry policies are being adopted without enough community engagement.

“We are now not focusing on academic prowess. What we’re seeing is literally social justice and activism,” she said. “I’m like let’s just get back to the basics.”

Athey said the reason C.A.R.E. collectively decided to endorse Zakrisson is because they know he shares their frustrations and believe he will be the voice to ask questions from the board.

“There’s a broad spectrum of examples where the school board is not listening to parents. Parents are pulling their kids out of school because they don’t want their kids subjected to the kind of social agendas the divisions are pushing,” Zakrisson said. “I’m going to ask the questions that aren’t being asked. I’m just one voice among seven but I can ask the questions.”

Farnsworth said he is not surprised that the issue of how much influence parents should or shouldn’t have in schools has emerged as one of the hot button issues for state and local elections this year.

“I think that we’re living in very contentious times where every matter becomes one of partisan combat,” he said.