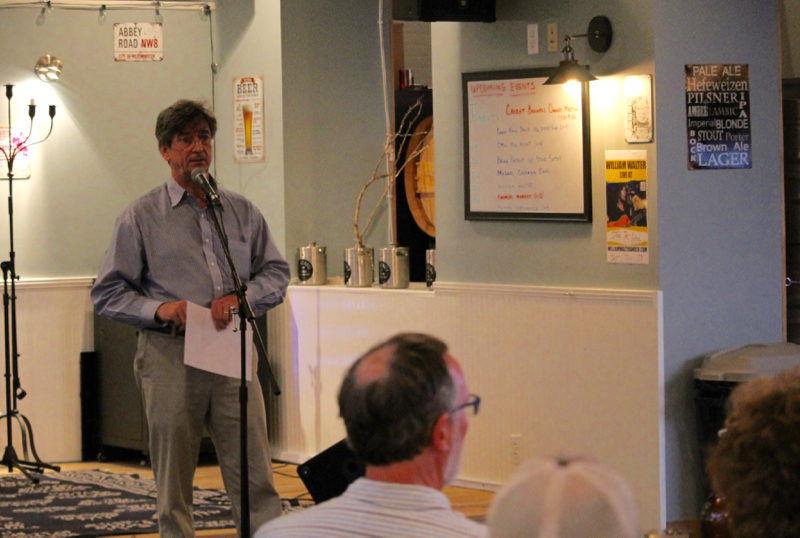 Developer Frank Stoner is looking for a nonprofit to help manage a civic space that could be coming to Crozet’s town square if a proposed rezoning is successful.

At a Crozet Board of Trade meeting this week, Stoner updated about 25 members of the Crozet business community on plans for a public plaza space proposed as part of a rezoning of a vacant 6.24-acre area in the heart of downtown Crozet from heavy industrial and commercial zoning to Downtown Crozet District zoning.

“We’d love to see The Square and the plaza be owned and maintained by a nonprofit entity,” said Stoner, of Milestone Partners and Crozet New Town Associates. “To me, the Board of Trade seems like a better solution, but we’re going to have to have a nonprofit to maintain it because the county’s not going to do it.”

Stoner said a nonprofit like the Crozet Board of Trade could have access to financial tools to get the plaza built, such as grants and tax-free bond financing.

The Downtown Crozet Initiative is a volunteer effort to discuss design ideas for the former Barnes Lumber and CSX sites. It recently selected the Baltimore-based firm Mahan Rykiel to design the plaza. Mahan Rykiel previously has worked with Charlottesville on a design to implement a master plan for McIntire Park.

On the Downtown Crozet Initiative website, the developer has indicated it will dedicate a minimum of 12,000 square feet for the plaza, but is “seeking grants to help fund the design, construction and maintenance of the civic space” to avoid passing those costs onto future downtown businesses.

“There’s got to be a destination downtown that people want to go to.”

“There’s got to be a destination downtown that people want to go to,” Stoner said. “It has to offer something unique not just to the residents of Crozet, but to potential businesses because we need businesses to locate downtown.”

“One thing I think we might do is participate in the plaza by being an organization that fundraises for a statue in the plaza, a historical kind of statue,” said Mike Marshall, president of the Crozet Board of Trade.

Marshall suggested the statue could incorporate Claudius Crozet and John Kelly, both of whom were involved with the construction of the Blue Ridge Tunnel.

Marshall also encouraged the Crozet business community to be involved in discussions about Stoner’s proposals. The 20-acre site, which was once home to Barnes Lumber, is being developed in two phases.

“Whatever is decided about Phase I will have enormous implications for what can happen in Phase II, so Phase I must be done correctly or Phase II will be a mess,” Marshall said.

Stoner said the plaza design process will start in August and last until early next year. He also posed some questions to the Board of Trade as to how the plaza space could reflect Crozet’s identity.

“I think it is important for Crozet to have a brand right now. We are growing as a community but I think it’s important to have that foundation, that story of who we are,” said Mary Beth Bowen of Hive Creative Group, who is working with the Downtown Crozet Initiative. “When people think about Crozet, and they talk about Crozet outside of this area, what do we want them talking about?”

Kevin Clifford of Crozet Pediatric Dentistry asked Stoner about the types of businesses he hopes to attract to downtown Crozet.

Stoner said he wants to create a vibrant downtown that will encourage businesses to locate their offices in Crozet.

In other business, the Board of Trade elected James King of King Family Vineyards as its vice president and discussed a Christmas raffle to encourage people to shop at Crozet businesses.

Over the years, Marshall said, the name of the nonprofit changed to become the Crozet Board of Trade to become more inclusive of businesses in the Old Trail and Clover Lawn Village areas, and the board also has assumed leadership for the fundraising efforts for Crozet’s Fourth of July fireworks.

“[The Board of Trade] emphasizes that we care about how Crozet will be prosperous, what can we do as businesses to support each other’s business, keep money circulating in town … [and] emphasize supporting the economy of Crozet,” Marshall said.