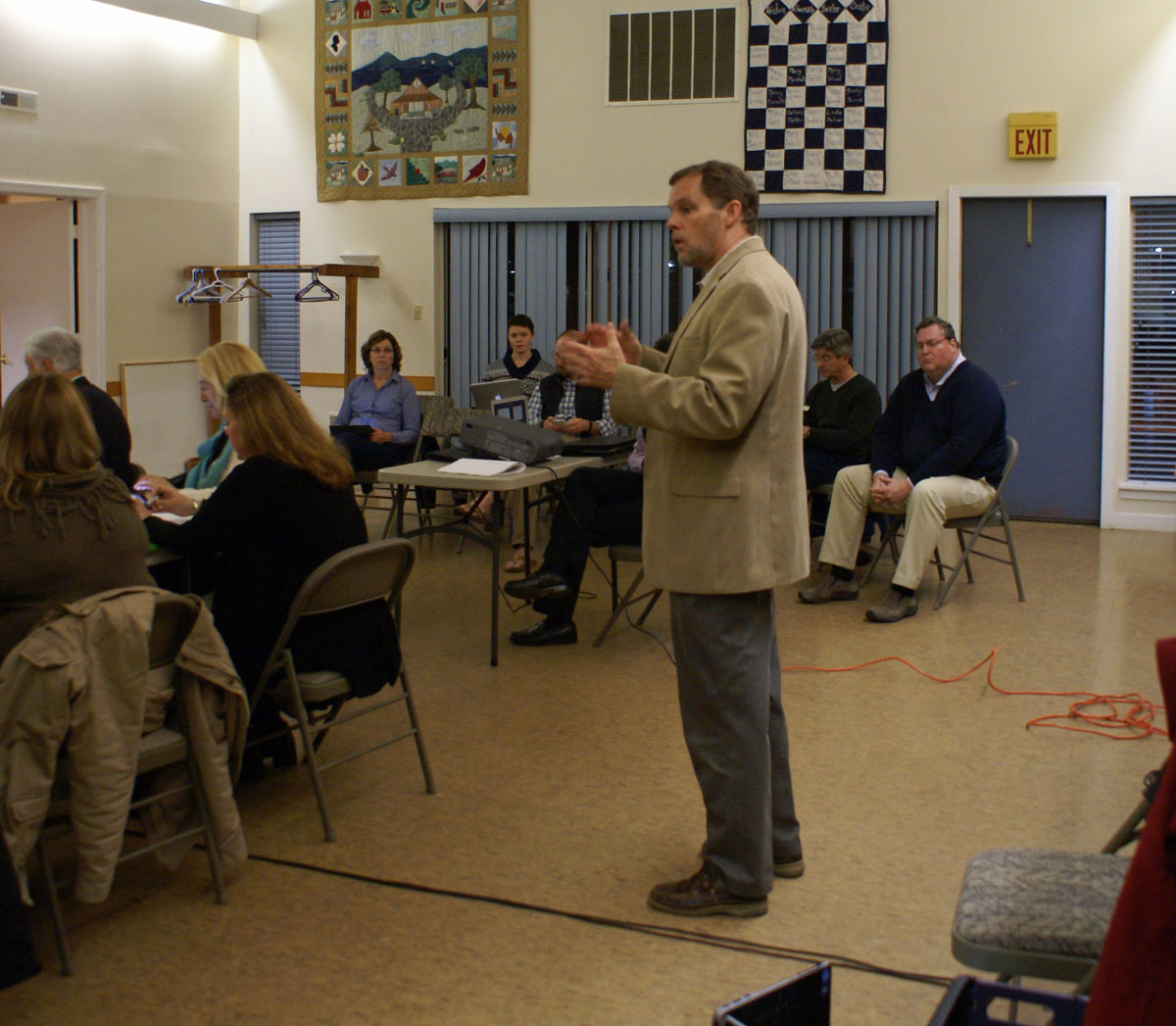 Crozet Streetscape has residents both concerned and delighted

A new development team has stepped forward with the goal of transforming the old Barnes Lumber property into a mixed-use development in downtown Crozet.

Milestone Partners met this week with the Crozet Community Advisory Council, seeking input on the redevelopment of almost 20 acres of industrial land in the heart of Crozet. The citizen body advises the Albemarle County Board of Supervisors.

“This is designed to be a dialogue to find out what’s important to that group and the Crozet community,” Milestone’s Frank Stoner said before the meeting. “I think the real challenge there is to figure out what downtown Crozet wants to become.”

Residents emphasized they want the project to fit in with the character of the existing community while strengthening Crozet’s business district.

“One of the things that we have heard time and time again … is that people want a commercial center,” said council chairwoman Meg Holden. “That’s what the community is desperately wanting, and every day we don’t have it we are losing to Old Trail.”

Milestone is under contract to purchase the two parcels formerly home to J. Bruce Barnes Lumber. The property was foreclosed upon and bought back by Union First Market Bank in 2012.

Throughout the two-hour conversation, Crozet residents said they wanted something different from what they see at new developments in Albemarle like Stonefield and Crozet’s Old Trail Village.

“We’ve got one opportunity to get it right or to screw it up very badly for a long time,” said Chris Holden. “I would hope you somehow thread the needle … in such a way that you come up with designs that honor where we come from, our agrarian past and also the eclectic nature of who we are today.”

“What would make it to me feel naturally grown,” said council member Leslie Burns, “would be if the way it was built had little niches, gathering spots and a variety of architectural styles [as if] it had naturally grown up over the decades.”

Stoner and his partner, L.J. Lopez, said they understood the community’s goal for building a “great place.”

“It’s easy to build new, but it’s tough to replicate the age and character that’s there,” Lopez said. “Great places are often built over time … because they were done organically and not all by the same person.”

Someone intimately familiar with the financing and commercial leasing challenges in Crozet is Katurah Roell of the Piedmont Development Group. He spent several years planning the same site for the lumber yard’s former owners.

Roell said he thought Stoner’s team could be successful, but that pressure from the county to pay cash proffers “could kill it.”

“He can be successful if he has good positive feedback from the community and he can get enough residential units in there,” Roell said.

Albemarle County has per unit cash proffer and affordable housing expectations for major residential rezonings. Proffers mitigate the impact of new development by funding community infrastructure such as roads and schools.

The Board of Supervisors gave Stoner one piece of the puzzle earlier this month when it approved an amendment to the Downtown Crozet Zoning District allowing, with a special-use permit, residential use on the first floor of buildings.

This will facilitate inclusion of townhomes and multi-family apartments with special permission. Stoner said units of affordable housing would be built as required by the county but that cash proffers for other residential units were a “non-starter.”

“A portion of the site will have to be residential,” Stoner said. “We need more rooftops within walking distance of downtown.”

Stoner estimated the project would include 94 to 160 homes, including 75 to 85 single-family units or townhomes and 24 to 75 multi-family apartments. He said the commercial development would all be two-story buildings and total about 100,000 to 130,000 square feet.

Known for his previous business at the Batesville Store, Crozet resident Cid Scallet says he is hoping that he and his wife, Liza, can bring a business to downtown. However, he said he also has concerns that what’s coming may look less like historic Crozet and more like “nightmare Northern Virginia.”

“Barnes Lumber is not only a precious commodity to some developer that is going to make a ton of money, it’s also an integral part of our community,” Scallet said in an interview. “I am concerned that the Board of Supervisors is going to let a developer get away with something that’s not in the interest of the community.”

Scallet said he was supportive of Roell’s previous plan for the lumber yard. The 2010 proposal included a pedestrian mall, what was described as a small-scale version of Charlottesville’s Downtown Mall.

It also included a venue for Scallet’s restaurant with a rooftop bar on a parcel adjoining the lumber yard. A new commercial building, Claudius Place, had been approved for construction on the parcel.

When the lumber yard went through foreclosure, Roell was left with just the half-acre parcel for Claudius Place. He says his project has funding and that he can break ground once he finds another tenant to join the Scallets.

“What was so exciting was that Katurah worked very closely with us to create a space that was good for our operation in the heart of Crozet,” Scallet said. “We spent 18 months trying to make it happen.”

“Our plans are now up in the air,” Scallet said. “We continue to want a bakery, deli and music venue in the heart of the real Crozet.”

The Piedmont Development Group’s Chris Lee said they were regrouping on the Claudius Place project.

“I know [Cid Scallet] is frustrated we haven’t been able to get that project moving,” Lee said.

Asked if his plans would include a pedestrian mall, Stoner said, “it’s not practical in a town like Crozet.”

“I’d rather have a quaint main street with wide sidewalks where you can create a piazza-like feel and a quality outdoors space,” he said.

Stoner said he expects to submit an initial proposal to Albemarle County in January, a review he thought could take at least six months.

“If we get past that, then we would need a lot of input from the community,” Stoner said.