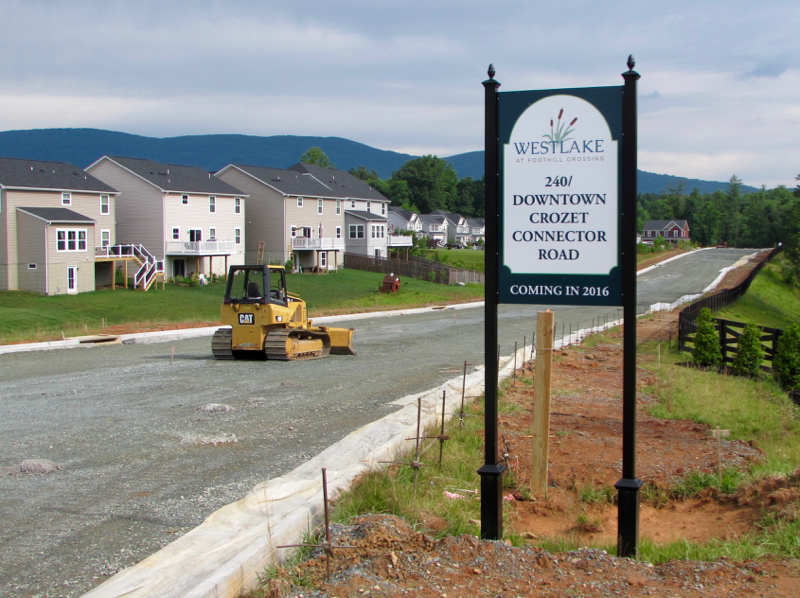 The first part of Eastern Avenue is currently being built near Westlake Hills. If approved, the rezoned portion of Foothill Crossing would connect to this portion and connect Eastern Avenue with Park Ridge Street.

People living near Crozet Park and in the Westlake Hills neighborhood may have a more direct route to Route 240 if a rezoning is approved.

“The proposal is to construct Eastern Avenue from the current end of Park Ridge Drive, south to and just across the creek [on the southern end of the property],” Valerie Long, an attorney with Williams Mullen, said in an email to Charlottesville Tomorrow. “On the other side of the creek, Eastern Avenue already exists, where it was built to provide access to the Westlake neighborhood.”

Long represents Riverbend Development, which wants to rezone nearly 38 acres that sit between Crozet Park and Foothill Crossing from a mixture of low-density R1 and R2 residential zoning and light-industrial zoning areas to a higher-density R6 zoning that would allow up to six units per acre by-right.

Eastern Avenue is envisioned by the Crozet Master Plan — a part of the county’s Comprehensive Plan — as a connection between Route 240 and U.S. 250.

The proposed rezoning also calls for an extension of Park Ridge Street and an eventual connection with Parkside Village.

According to the plan, Riverbend proposes a maximum of 180 units in the development area, with at least half of the proposed lots as single-family detached units and at least 10 percent of the units will be single-family attached units or townhouses.

Long said the rezoning is an effort to develop the land in accordance with the master plan.

“That is the crux of what we are proposing with this application — to rezone most of the land from R-1 residential to R-6 residential so it will match up with the master plan,” Long said.

In a proffer statement dated May 16, the owner is offering 15 percent of the units for affordable housing, in addition to a dedication of greenway trail space and a bike and pedestrian tunnel underneath Eastern Avenue.

The proposed proffers also include at least 20,000 square feet of community civic space.

“The owners will be working with the Foothill Crossing residents on the design of the space in the future, but some of the ideas that have been mentioned include a tot lot, clubhouse, recreational field, picnic area, plaza [or] community meeting space, a sports court or some combination thereof,” Long said.

The most recent phase of Foothill Crossing was approved June 8 and will bring 33 new single-family detached homes to land along Leon Lane and Trinity Way.

The developer hopes to take the proposed rezoning before the Planning Commission within the next few months.

South of the rezoning, a proposal for a subdivision of land in the Westlake Hills neighborhood for 27 new lots with single-family detached housing is currently under review by county staff.

Stanley Martin Homes, which is developing Westlake Hills, also is working on the first section of Eastern Avenue.

The section will be approximately one-fifth of a mile long and intersect with Westhall Drive and Jonna Street.

“[The development] was by-right; we didn’t necessarily have to do that section of road, but since it’s in the county comp plan, we went ahead and provided that,” said Jeremy Swink, director of land in the southern region at Stanley Martin.

Eastern Avenue has been discussed for more than three decades, but only now is it becoming a reality as parcels develop.

A challenge facing the completion of the road is constructing a crossing of Lickinghole Creek north of the Cory Farm neighborhood.

Ann H. Mallek, who represents the White Hall District on the Albemarle County Board of Supervisors, said there was initially some thought that developers would pay for the bridge.

“That, of course, has not come to pass because it is expensive and the market has changed,” Mallek said. “The road is being built parcel by parcel on each side, and we’re now focusing on getting a rudimentary design done so that it could become part of a future application for state funding.”

Another challenge is the Buckingham Branch Railroad that runs next to Route 240.

Kelsey said an underpass has been identified as the best option for the county.

For now, the county plans for developers to build northern parts of Eastern Avenue and will eventually seek funding for Lickinghole Bridge and an underpass for the Buckingham Branch Railroad as a capital project.

Neither the Lickinghole bridge nor a railroad underpass for Eastern Avenue is currently funded in the county’s capital improvement plan.

According to the county’s fiscal year 2017 capital projects requests, the Department of Community Development recommends that the county turn to the State Revenue Sharing Program to help fund these projects.

The county estimates the costs for the Eastern Avenue connections to be about $12.9 million and it is suggested that design and construction start within the next 10 years.