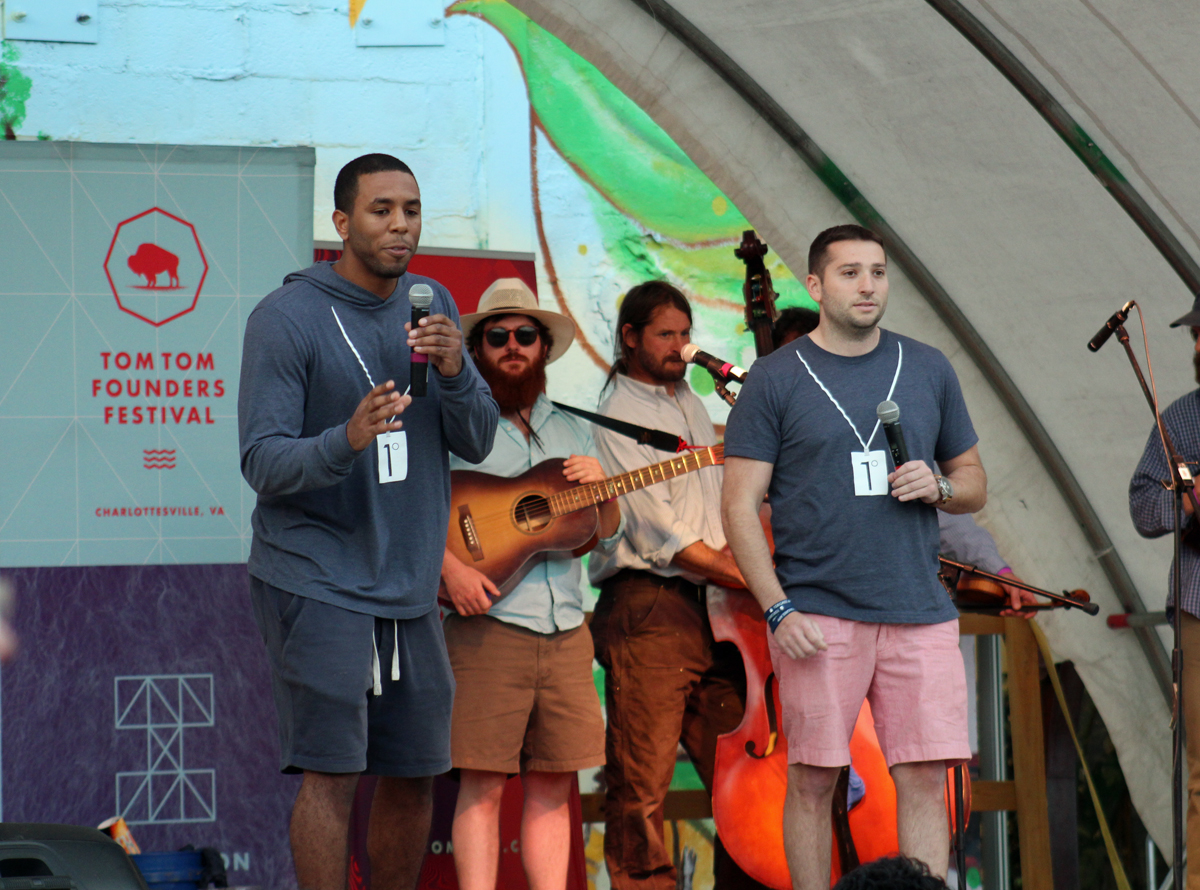 (from left) Maximilian Huc & Sam Boochever make a pitch at Tom Tom for 1Degree, a mobile app that enables users to have one-on-one conversations with celebrities and public figures

Sam Boochever and Maximilian Huc, students at the University of Virginia’s Darden School of Business, won the festival’s Crowd-Funded Pitch Night, taking home the top prize with their pitch for 1Degree, a mobile app that enables users to have one-on-one conversations with celebrities and public figures.

The sixth annual pitch night brought an eclectic group of Charlottesville entrepreneurs and an audience of hundreds to the Ix Art Park.

Boochever and Huc took home $2,700 generated from the audience and $2,500 in matching funds from the Darden School, bringing their total winnings to $5,200.

The event took place immediately after a community picnic that kicked off the 2017 Tom Tom Founders Festival. The contestants gave their three-minute pitches in front of the art park’s largest mural, which displays the words: “DREAM BIG.”

On 1Degree, users can bid on two-minute FaceTime video calls with celebrities in spontaneous online auctions. Winning bids are currently capped at $200.

Celebrities can message fans after the call if they wish to stay in touch. The celebrity can donate some or all of the proceeds from the auction to a charitable cause of their choice.

Huc said in an interview that he and Boochever were inspired to create 1Degree when they heard about hip-hop fans paying as much as $2,000 for a selfie with their favorite artists.

“It’s unbelievable how much money people are willing to pay, how much they are willing to go out of their way, to access these individuals who influence their lives,” said Huc.

In his pitch, Boochever said that the primary platforms for engagement with celebrities today offer live video streams for large audiences, or pre-recorded video and voicemail messages for individuals.

“None of the platforms have the combined exclusivity, the spontaneity and excitement of the live face-to-face interaction that 1Degree offers,” Boochever said in his pitch.

Boochever and Huc released a prototype of the 1Degree app in August 2016. They debuted an enhanced version in March at South by Southwest in Austin, Texas, and recently entered pilot deals with Univision and Warner Brothers.

Boochever and Huc plan to continue working on 1Degree in Charlottesville after graduating from Darden in May. However, Huc said they hope to eventually bring the business to Los Angeles.

“The support we have been able to get from our professors, our classmates and the community is something we don’t take for granted,” said Huc.

Charlottesville sculptor Craig Pleasants took second place with his pitch for the Octagonal Living Unit, a 450-square-foot house that can be assembled from a kit of polystyrene and steel panels. He received a spot in Community Investment Collaborative’s 16-week entrepreneurship workshop.

Pleasants’ house construction kit is currently on sale for $35,000. Pleasants said in an interview that his invention is much more spacious than a typical “Tiny House.”

“Tiny houses capture the imagination, but you wouldn’t want to live in one for a long time,” Pleasants said.

Pleasants said that he lived in a prototype of the Octagonal Living Unit with his wife for three years in the 1980s.

After the 10 contestants delivered their pitches, audience members could buy up to five voting tokens for $5 each.

Myra Khan, of Charlottesville, cast one vote for The Center for Earth-Based Healing in Roseland, which provides rehabilitation programs for victims of domestic and sexual abuse.

“Everything they said about healing and connection to nature really resonated with me,” Khan said.

Khan also voted for Prende Pants, leggings that Tonquise “TQ” Evans has designed for new mothers to wear after childbirth.

“I didn’t think I would feel anything about that project, but [Evans] did a really good job of describing it,” Khan said. “Also, the fact that it would be manufactured in Virginia is really cool.”

Tom Tom Founders Festival Director Paul Beyer, who emceed the contest, said that all contestants were likely to benefit from sharing their business idea with a large audience.

“Charlottesville is a very giving community,” Beyer said. “Once you get plugged in, people are there to support you.”

Carolyn Schuyler, winner of the 2015 pitch night, told the audience that Wildrock, her outdoor play space near Crozet, will open later this month.

“After Tom Tom, I literally had hundreds of people over two years come in to help, giving thousands of hours of time to make this a reality,” Schuyler said. 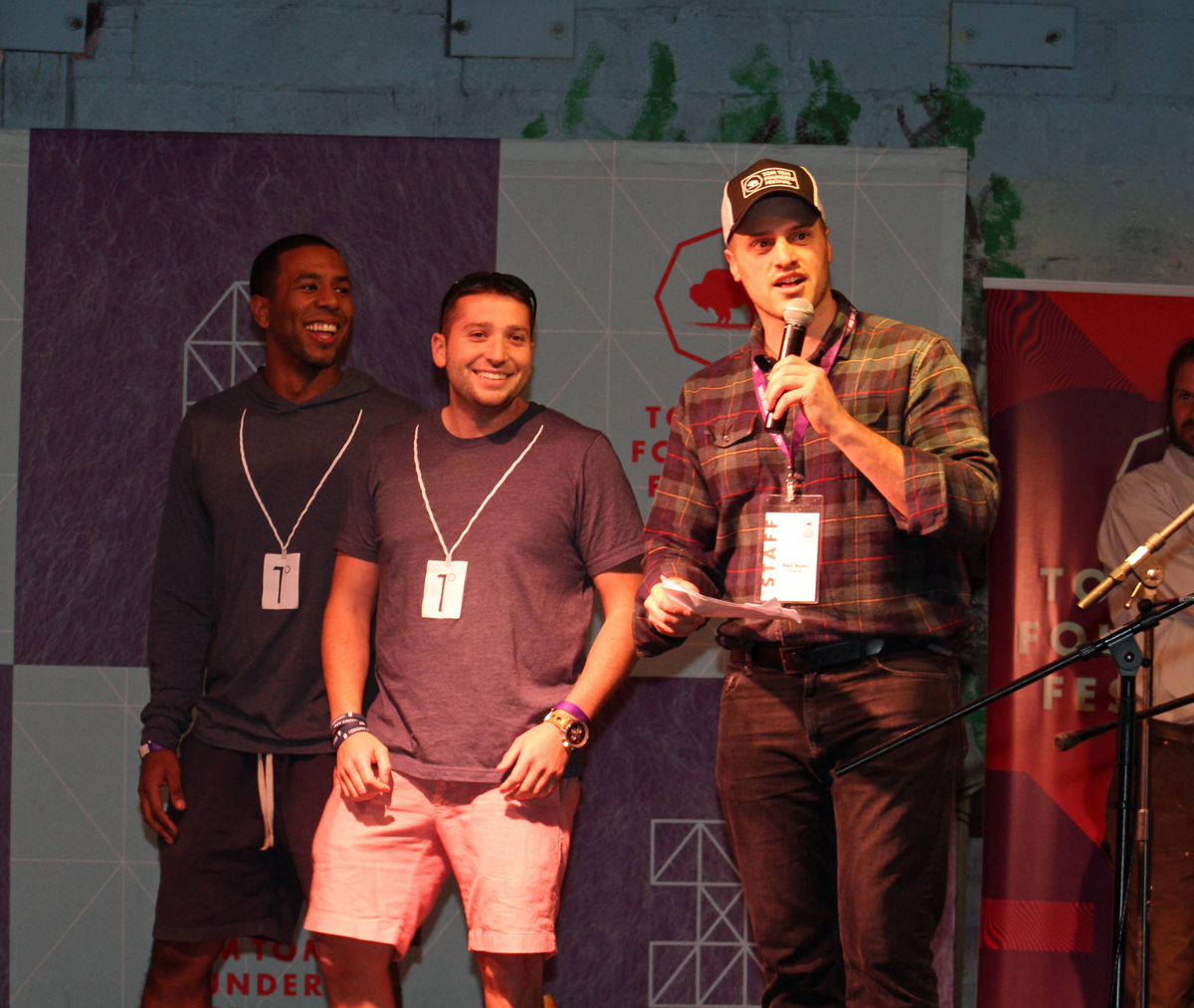