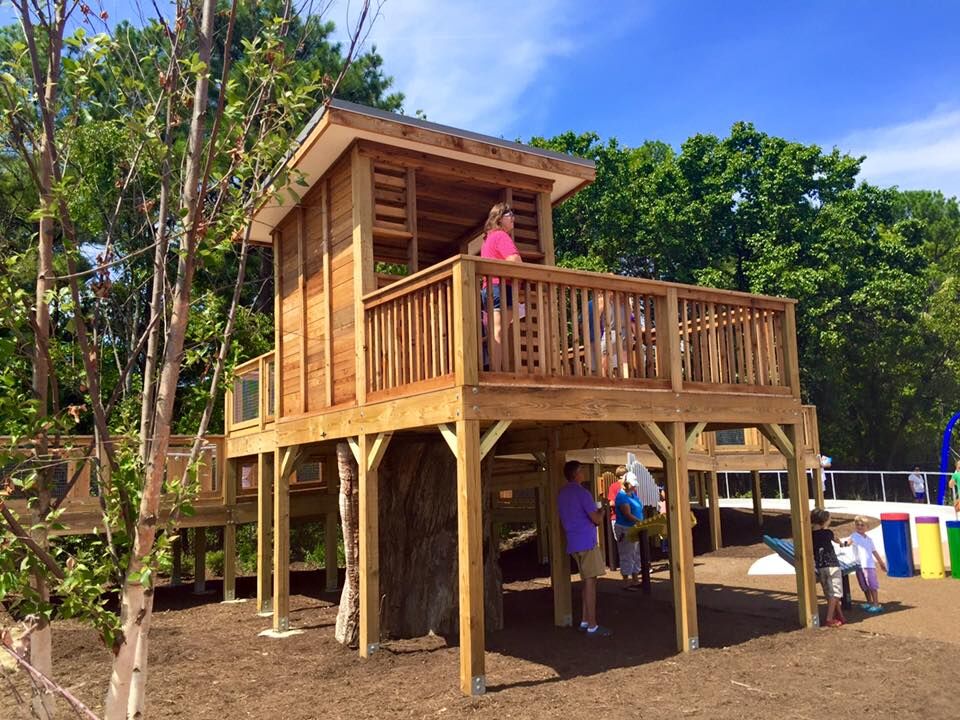 The Bennett’s Village playground concept is inspired the ARC Park in Richmond, which includes a treehouse and many other play structures accessible via wheelchair.

Two Charlottesville parents who lost a son this year hope to honor his memory by creating a playground that all area children can enjoy.

Five-year-old Bennett McClurken-Gibney died Feb. 28 from sepsis incurred after influenza. As an infant, Bennett was diagnosed with spinal muscular atrophy type I, a rare genetic disorder that causes muscular weakness and respiratory difficulties.

Bennett’s mother, Kara McClurken, said her son stayed active throughout his short life. He loved racing his wheelchair through the halls of Johnson Elementary School, seeking out rocks for his extensive collection, and spending time at playgrounds with friends and family.

McClurken said many structures at local playgrounds were inaccessible to Bennett in his wheelchair. “I didn’t know how long I was going to be able to carry him through those little tunnels and spaces,” she said.

“Really simple, thoughtful [design] choices can make a huge difference,” Gibney said. “Kids and adults have all sorts of disabilities. There is no reason we can’t have all these people playing together.”

Bennett’s family and friends started a GoFundMe campaign for a universally accessible playground — Bennett’s Village — that has raised more than $40,000 since March 2. The campaign’s fundraising goal is currently set at $1.6 million.

“Nobody who had contact with Bennett is ever going to look at a space or an obstruction in the same way,” said McClurken. “It would be a disservice to him to not take his light and his love and push it out on our community.”

McClurken said she hopes Bennett’s Village could be modeled after the ARC Park in Richmond.

The Greater Richmond ARC opened the 2.4-acre park near the organization’s headquarters in 2015. It is open year-round from dawn until dusk and is free to use.

Doug Payne, spokesman for the Greater Richmond ARC, said the organization got input on the park’s design from focus groups that included clients with disabilities, their families and caregivers, along with other therapists and special-education teachers.

“We would like to see people take our concept and build it up nationwide,” Payne said. “There is no pride in authorship here.”

Among the ARC Park’s most popular features are a treehouse accessible via a ramp; a “multisensory wall” designed to stimulate hearing, touch and sight; and large platform swings that visitors can use in a wheelchair or lying down.

Playgrounds at the ARC Park are surrounded with rubberized mulch to cushion falls while providing enough traction for the use of wheelchairs and walkers. On summer days, sprinklers that spray cool mist can provide some relief to children at risk of overheating.

Payne said visitors to the ARC Park also appreciate more practical amenities, such as charging stations for electric wheelchairs and a family restroom with an adult-sized changing table.

“Having everyone here in the park is a teachable moment for everybody,” Payne said. “Most of our families have two or three children, only one of whom has a disability. With the ARC Park, everybody can stay together and have fun.”

The Greater Richmond ARC raised $3.4 million to create the park, including a $1 million grant from the Judith Haskell Brewer Fund of the Community Foundation Serving Richmond and Central Virginia.

Mark Lieberth, a landscape architect with Charlottesville-based Land Planning and Design Associates led the design work for the ARC Park.

“Too often, designers design for themselves, and not for kids,” Lieberth said. “We accommodated things that we heard from so many people, so it is kind of packed in there. But it really works.”

McClurken said she has many happy memories of visiting the ARC Park with Bennett.

“I could sit on a bench and just watch him play,” she said. “Being able to play independently was important for his development, and for the development of other kids. When an adult is in the space, it changes the whole dynamic.”

While Charlottesville may lack a place comparable to the ARC Park, the city’s Department of Parks and Recreation has taken steps to make its 29 playgrounds more inclusive of people at all levels of ability.

Burnley-Moran Elementary partnered with City Schoolyard Garden last year to make a “sensory garden” in the school’s playground, with five beds of plants targeting each of the senses.

VSA Charlottesville/Albemarle, an arts organization overseen by the city parks department, purchased a “musical playground” for Pen Park last year for $11,584. The structure features large drums, xylophones and chimes that children can play as loudly as they wish.

“It’s important for all children to play outdoors and be creative with music,” said Sarah Blech, Charlottesville’s manager of therapeutic programs.

Blech said she hopes to work with Bennett’s parents on a long-term plan for their playground project.

“[Bennett’s Village] has started a wonderful dialogue in our community,” Blech said. “This will take input from parents and kids — it won’t just be Charlottesville Parks and Recreation saying what should happen.”

Contributions to Bennett’s Village can be made at gofundme.com/bennetts-park. Those who want to get involve with the project can email bennettsvillage@gmail.com.